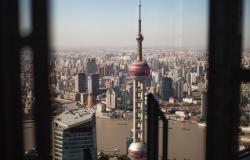 A short video went viral in China over the past two days. A Chinese student took a 26-hour flight back from London (transit in Singapore) and landed in Shanghai's Pudong Airport. She made a vlog of her experiences at the airport, recording as she became tearful in front of the loving and caring ground staff.

London was very different to Shanghai. When she was preparing to leave few people were wearing face masks Instead, one could see British government-sponsored posters saying “Do Not Wear A Face Mask If You Are Well”. At the Heathrow Airport things were not very different, with even counter servants and security staff not wearing masks. The only mask-wearers among the passengers were mostly Asian. But, the atmosphere changed abruptly when she landed in Shanghai. Passengers were put in different groups by cabin staff and left the airplane group by group. There was a seriousness in the air, unmistakable and undeniable.

By the time she was let off the plane, it was almost midnight and this notwithstanding, the immigration hall was still quite a hustle-bustle, full of quarantine teams with PPE (personal protective equipment). This student became tearful as she felt that for the first time in the past nearly 30 hours, she could now relax. All she needed to do was to follow the guidance of the airport ground staff.

After she finished customs clearings and walked out of the arrival gate, it was already midnight. There was a yellow sticky note on her passport, indicating a 14-day period of self-isolation at home or a quarantine location. Next she would need to report herself at the collection point staffed by quarantine teams. At this hour, few passengers were around and since there was no air-conditioning  t was still a bit chilly. PPE-ed staff members waiting at the station only had a blanket on themselves to keep warm. Although two members would be enough to handle her registration, all the staff at the collection point got to their feet when she came and helped her to check all information and process the registration, whilst giving her detailed advice on the 14-day self-isolation or quarantine period. Every few hours a cleaner in PPE would come along to sanitise and clean the waiting area.

Two hours later the coach to her district arrived with a police officer, a medical professional and a driver on board. There were only three other passengers but they still all went through a procedure of temperature checks, registration and luggage sanitisation.

Finally, the student was taken to a temporary quarantine location, which was akin to a B&B hotel. After some rest, breakfast was delivered at seven o’clock in the morning and during the day all were given a COVID-19 test. If everything turned out fine, they would be discharged and allowed to head home for self-isolation. If a test proved positive, they would be transferred to dedicated quarantine hospitals for treatment. The student's vlog stopped after the temporary quarantine location and one is left wondering what followed.

Another short video posted on Tik Tok may provide an answer. In it a young man returns from overseas and reports himself to a registration desk outside the residential quarter of his home. The staff at the desk, including a porter, a security guard, a volunteer and several sanitary professionals, who had already been informed by the quarantine authority of man's return, follow the government-prescribed procedure of temperature taking and registration. When this young man arrives back home, the sanitary professionals clean and sanitise in his wake.

Staff members from the man's local urban neighbourhood committee (juweihui) were already at his doorstep waiting for him. After giving oral instructions on what to do during the 14-day self-isolation period, they gave him a package containing all the necessary information on what to do during this period and some advice on exercise and activities at home. Before leaving, the neighbourhood committee also put a sign on the door of this home, informing the neighbours that someone had just returned from an overseas “hot zone” – a list of countries published online through government portals, WeChat public accounts (gongzhonghao), and social media apps. For 14 days these residents must undertake a self -monitoring and -reporting regime by accessing government-sponsored apps or popular apps like Zhifubao (China’s PayPal, an app developed by Alibaba for electronic payment and widely used in the country). If everything is fine at the end of this 14-day period, then the quarantine sign would be removed and one receives a green QR code on the app. This serves as a pass should s/he wish to access public facilities (e.g. bus, coach, park, museum or even restaurant).

This has been the case in China for the past two months since the government announced a lockdown of Hubei Province and Wuhan City. These swift actions made policies, procedures and codes of conduct and behaviour now enforced throughout the nation by a mass mobilisation of its grassroots governance infrastructure. The development of digital technology, social media, and mobile phone applications has also enabled the government to create an all-encompassing umbrella plan that seeks to link the online information flow and reporting with offline monitoring and notifications.

As has been pointed out by Elizabeth Perry, Sebastian Heilmann and Jean Oi, among other scholars, one of the central features of local governments and politics in China has been a bureaucracy that penetrates even the remotest corner. Such a gigantic Leviathan, though susceptible to ossification and rigidity, has on the whole demonstrated a remarkable degree of resilience and adaptiveness to new, emerging circumstances. Cadres at the local level receive policy documents and governance-related instructions on a regular basis. They exercise a high level of autonomy in implementing these policies, while at times they may even engage in mutual learning and competition, to see who gets the job done quicker and better. If they run out of human resources, they can also recruit volunteers from citizens or students living in the local neighbourhood. This is often seen during major events like the Olympic Games (2008), the Expo (2010), and now the COVID-19 (2020) episode. Cadres, part-time employees and volunteers are organised to work in shifts to ensure a smooth management of local affairs.

As a matter of fact, volunteers have played an indispensable role in combating the COVID-19 virus this time, especially in Shanghai in the past few weeks. While domestically the virus was brought under control, with almost all the places across the nation reporting zero or few new infections, the past two weeks have witnessed a large influx of people coming into China from all over the world. Local governments in places like Beijing, Shanghai, Guangzhou and Shenzhen - some of the main ports to receive international flights - have announced a shift in the focus of their anti-virus work from domestic containment to precautionary measures targeting international travellers. This has been a particularly thorny issue for Shanghai where there have been over 210,000 foreigners living and working. Communication was sometimes a problem, as not every local cadre or government employee could speak English or the language.

It is precisely here that volunteers have become an important part in this anti-virus cause. For residential places with many foreigners, local neighbourhood committees often recruit volunteers from local foreign residents who are able to speak Chinese, English or the target language. Then on each floor, at each residential building, there is a head of the floor (loudaozhang) or head of the building (louzhang) that monitors and oversees the implementation of precautionary measures. They even hand out questionnaires to acquire better knowledge of individual tastes and habits, helping quarantined or self-isolated members to buy daily necessities or empty the trash can. Staff members from the property management unit also work on shifts to ensure a 24/7 availability of property services.

Such an active, pervasive and responsive infrastructure of grassroots governance has been the key to China’s remarkable record in the past two months of COVID-19 containment and treatment. Nevertheless, the liberal-minded may frown upon the intervening style of these grassroots cadres, committee staff or volunteers. How will it be possible for us to get a better, theory-informed understanding of this phenomenon?

The conflict between (government) authority and (citizen’s) autonomy will immediately ring the bell of the “Joseph Raz Paradox”. As is argued in his The Authority of Law (1983) and The Morality of Freedom (1988), Joseph Raz opposes the principle of neutrality as enshrined in the liberalist conceptualisation of political diversity and value multiplicity. Rather, he regards autonomy as a fact of life and suggests that autonomy is the precondition rather than consequence of human flourishing. To ensure that this precondition is fulfilled, the state has a duty to pass judgements on the value of certain lifestyles among the options available to individual citizens. The state, in this case, may take measures to ensure the achievement of those lifestyles deemed valuable. Only through such intervention will it be possible for individuals to become autonomous and flourish.

Now, liberalists could immediately smell the danger of interventionism. But it seems rather self-contradictory to argue that autonomy is important on the one hand, while on the other, some degree of interference from the state is also indispensable. Nevertheless, if we contextualise this argument within a circumstance dictated by force majeur (e.g. the current COVID-19), government authority and personal autonomy converge where there is a high degree of overlap between public and private interests. The foundation of authority, as well as the reasonableness of government interventions in citizens' daily life, can be legitimated on the basis of its function to provide service to ordinary citizens, or, to put it in Raz’s terms, “to serve the governed”. By and large, the phenomena in China at large, and in Shanghai in particular, are worthy of greater scholarly attention and wider theoretical debate.

Xi Lin currently lives in Shanghai and is a Reader in Political and Legal Philosophy at the Institute for Advanced Study in Social Sciences, Fudan University.

Photo by Saunak Shah from Pexels