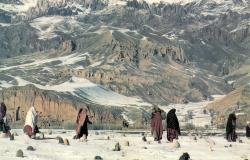 Saqib Qureshi argues that profit may have been the real motive of America's long and ultimately unsuccessful involvement in Afghanistan.

Right now, you’d be hard pressed to know how History will remember the Afghanistan War. We’re too close to the traumatic events in question to make much sense of them—was Biden’s pull-out botched (the buck, after all, stops with him)? Was there no good exit? Should we have stayed a little longer or left a long time ago? But, sooner or later, we’ll have to produce a coherent narrative of America’s longest war and slowest defeat.

We’ll have to come up with a story that explains a tragedy that has cost tens of thousands of lives, literally trillions of dollars, and left an enduring image of America that is as shocking as it is infuriating.

A story that accords us the ability to learn from our mistakes.

When we do, I hope we assign a prominent place to the mercenaries. Yes, the mercenaries. You might know them as contractors. Perhaps, a little more caustically, as war profiteers. But we are beyond the point when political correctness will serve any purpose. The fact is, even as America’s Treasury, and Americans themselves, were bleeding, plenty of other Americans were making loads of money.

And the deep webs that connect and implicate national security and foreign policy with the weapons and war industries is part of the reason why America’s Afghanistan strategy was so obviously self-defeating.

We’ll get to that in a moment.

Of course, the role of private contractors is perhaps better known in Iraq, whether it is the dubious (and at times dastardly) of Blackwater, or detailed by disillusioned bureaucrats, who grimly and wistfully recall the blockheadedness of American strategy (likewise in Iraq). Still, enough detail has come out about what transpired in Afghanistan that we should all be angry.

Since 2008, $8 billion has been spent on, among other things, buildings for the use of the Afghan government—of which less than ten percent remained in good condition some years later. In 2018, Special Inspector General for Afghanistan Reconstruction found that $15 billion dollars of government funds were wasted or misspent. That’s not to mention the $83 billion overall that went to the Afghan government.

Or the $2 trillion that the entire American enterprise cost the American taxpayer. We saw, over the weekend, the results of this endeavor. The Taliban all but swept through Afghanistan, with one Afghan darkly commenting that the Islamic Emirate was moving faster than 5G. (The contract for which, one can assume, will probably go to a Chinese company.) Why did so much money get spent for so little return?

I have a theory, which I hope more analysts, journalists, and subject matter experts investigate. It will require ample time, research, and detailed argumentation, but essentially my contention is this: Because the United States’ national security policy has been so broadly outsourced to private contractors, we have trouble distinguishing military objectives from considerations of profit.

Instead of common sense, we think dollars and cents.

As late as April, at which time the United States’ withdrawal from Afghanistan was all but a sure thing, there were still some 7,000 American contractors in Afghanistan, who were helping to keep the Afghan military machine in operation. Why would we think it made any sense to hand responsibility for an impoverished developing country to a struggling government backed by a military it lacked the expertise to operate on its own?

Who made that decision?

It would have made far more sense to design an Afghan National Army that met the needs, capacities, and limitations of Afghanistan’s society, economy, and culture. But given that this would dramatically decrease the need for American contractors and reduce the profit that could theoretically be made supporting that Afghan National Army in the future, that is not a path America pursued.

Somehow, therefore, while America bled, literally and financially, in Afghanistan, some of the biggest weapons contractors made off with handsome profits. The War on Terror was an industry, stretching back to Vice President Cheney and Halliburton. Thus the irony, if not the contradiction: We used private, for-profit companies, unaccountable to the American people, to try to build a democratic state in Afghanistan.

And now the Taliban have come roaring back.

As a citizen of a democracy, I am horrified by the implications for democracy, at home, in Afghanistan, and elsewhere in the world. As a Muslim, I am disgusted by the perversions of Islam that will follow in particular vis-a-vie the rights of women. As I have pointed out elsewhere there is a sudden wave of public concern about the fate of Afghan women under the Taliban. There is no doubt it will be horrific and there are already some disturbing signs of things to come. I deplore such actions. Yet, I also find it suspect that sudden Astro-turf industry of those who suddenly care about the fate of Afghan. Where were these people during the past two decades. I sincerely doubt they were there on the ground supporting the cause of Afghan women. Much less donating to their organizations. There are plenty of noble men and women who have been working on this very issue but, their cause is suddenly being exploited again by hawkish interventionists as it was in 2001.

But as a student of history, I am not hopeless. Just as Americans will have to construct a national narrative that helps clarify the errors and weaknesses of the Afghan war, so too can we construct a better story of Afghanistan.

One rooted in that country’s long history.

It bears underscoring that some decades ago, before foreign interventions and civil wars, Afghanistan was known for its liberal capital and dynamic political culture. Women were not forced into headscarves. The country was remarkably safe and orderly. Tourists from around the world flocked to its scenic vistas. It sounds fanciful now, but it’s worth noting: Sometimes we can look backwards to move forwards.

Dr. Saqib Qureshi is author of the Broken Contract: Making Our Democracies Efficient, Representative, and Accountable. He is an award-winning author, an expert in democratic policy development and has advised multiple governments. He is the CEO of the top Toronto-based real estate firm Building Capital, and previously worked at HSBC Investment Bank and McKinsey & Co. He has written for The Financial Times, Newsweek, The Wall Street Journal, Huffington Post, Entrepreneur, Euronews, and TRTWorld. In addition he is author of the award-winning book Reconstructing Strategy: Dancing with the God of Objectivity. He is currently a visiting fellow of the London School of Economics (LSE).