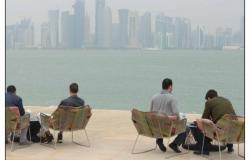 The Western world has already reached the peak of urban development. More than 80% of its population lives in metropolitan areas. The new wave of urbanization is now sweeping the developing world. Asia is its most prime destination, where China, India, and the affluent bits of the Middle East are on the fast track to urbanization. In 2014, India set out to build, from scratch, 100 new cities of a million people each. China, for its part, announced to settle 250 million of its rural residents into urban centers. In contrast, the Middle East historically has been more urbanized than any Asian nation except city states like Singapore. Qatar, for instance, has 80% of its citizens living in its capital city of Doha. Yet the most urbanized nook of the region is the Arab Gulf states.

The New Arab Urban is a magisterial account of the densely settled Arab Gulf. It centers on three sampled countries -- the United Arab Emirates (UAE), Qatar and Saudi Arabia – and interrogates why they built cities from ground up. Although an anthology of essays, The New Arab Urban is bound by the preceding overarching question in its quest for the rationale behind the ever-changing skyline of the Arab Gulf. The anthology has been edited by Harvey Molotch and Davide Ponzini. Molotch is a celebrated urban sociologist, whose ‘growth machine’ theory has, over the years, generated a rich body of research in rural, environmental, and urban sociologies, while Ponzini specializes in planning theory, contemporary architecture, and the urban environment. The convergence of their intellectual forces in this edited volume aspires to embed the Arab Gulf’s urban development in a new theoretical and empirical framework. The anthology’s twelve essays are thoughtfully organized around this framework. Their distribution in four sections -- The Gulf as Transnational; Assembling Hybrid Cities; Urban Test Beds for Export; Audacity, Work-Arounds and Spatial Segmentation – actually lays out the editors’ four-part theoretical and empirical framework outlining the New Arab Urban.

The region’s specific mega projects that attract the editors and contributors’ attention are Madinat Masdar (or Masdar City) in Abu Dhabi, King Abdullah Economic City (KAEC) in Saudi Arabia, Dubai Port (DP) in Dubai, and Doha, Qatar. The Masdar City has been in the making since the mid-2000s, which is now set to complete in 2030. Funded by the Abu Dhabi government, its cost has been put at a whopping $20bn. The Masdar City will be the greener version of the ‘Silicon Valley’ in the Arab Gulf, housing clean technology companies and businesses, and with zero carbon emissions. This putative ‘ecotopia’ draws heavily on the ancient Arab architecture, especially for designs to naturally cool its streets. Modeled after Cairo in Egypt and Muscat in Oman, Masdar City’s streets are already 20C cooler than the desert climate that drapes it.

KAEC, established in 2005 near Jidda in Saudi Arabia, is to open for business in 2020. Estimated at $55bn, its cost is astronomical even by the Arab Gulf’s lavish standards. Unlike Masdar City, KAEC harbors no environmental ambitions. It is rather destined to be another economic hub in the region. The building of KAEC cannot escape the charge of mimicking Dubai, which is already a business magnate in the Middle East and beyond. Dubai boasts some of the world’s largest vanity projects, of which Burj Alkhalifa, the world’s tallest building, is the most exaggerated. Just when Dubai was rising out of sand, Qatar came on the scene to rival it. Almost the entire state of Qatar is packed into its capital city of Doha. Like Dubai, Doha has built its fortunes on financial services and free trade, a development model that largely defines the Arab Gulf, although the editors of The New Arab Urban disagree. Qatar is modest in territorial heft, but its compact size does not deter it from nursing world-scale ambitions, which are pertinently manifested in its hosting of the 2022 FIFA (The Federation of International Football Association) World Cup.

Molotch and Ponzini argue that Masdar City, KAEC, Dubai Port, and Doha are part of the new wave of urban development, which they describe as the ‘new Arab Urban.’ What is traditional and modern in their architecture and how the past and the present ‘recombine’ in them is teased out in the pages of The New Arab Urban. Molotch and Ponzini call the intersection of the new and old architecture the ‘recombinant’ (hybrid) development. They argue that Arab Gulf metropolises (even megalopolises) are neither new nor old in their design, but reclaim and recombine the features of both tradition and modernity.

In their search for a new theoretical and empirical framework to understand the new Arab urban, Molotch and Ponzini test the classical economic theories, their Marxist alternatives, and mainstream approaches in geography, urban sociology and urban economics, only to find them all exhausted of their explanatory potential. They go so far as to claim that Gulf cities defy “grand traditions of urban scholarship – indeed of social science in general” – that are not “sufficient to grasp how societies, cultures and economies change, cohere and crumble – not just in the Gulf but elsewhere as well” (p.5).  They find thinkers like Adam Smith and David Ricardo and their classical economic theories inadequate to explain the new Arab urban, where tendencies to “truck, barter and exchange” are subservient to non-economic factors. Molotch and Ponzini write: “Markets are not open and free, information is held close to the vest on vastly unequal playing fields. Crucial principles like competitive advantage as a determinant of price and productivity hardly reign with consistency” (pp.3-4). Similarly, they declare that the conventional assumptions of urban sociology, geography and urban economics fail to explain the rationale behind Gulf cities.

The editors of the volume sound equally skeptical of Marxian analysis that they claim is challenged by Gulf conditions: “Along with the continuous potential for intervention through privilege and patronage, the state asserted itself with other traits we associate with feudal monarchies, colossal structures and symbolic showiness” (p.5). In furthering their critique of Marxian analysis, the editors gleefully highlight that the state, contrary to showing any signs of withering away, became a tool for enhancing monarchial rule: “Tax-free zones … involved political and economic logics of great powers, regional rivals, state-builders, and local businesses.” In other words, the apparently capitalist vehicle was (and is) a tool of the monarchical class, rather than vice versa” (p.5). To slap down the idea of them being “superstructure,” they argue, these states have been active agents for furthering the wealth and legitimacy of the royal faction” (p.5).

If classical economic theories, their Marxist alternatives and mainstream disciplinary traditions in urban sociology, geography and urban economics are all insufficient to explain Gulf cities, does it not amount to “exceptionalizing” the Arab Gulf? Molotch and Ponzini, however, take issue with the exceptionalizaiotn of the Arab Gulf as well, and reject the reductionist stereotyping of the region as “Arab,” “Islamic,” and “Middle Eastern” (traditionalist). They, in fact, pivot to “de-exceptionalize” the Arab Gulf, and associate it with what they call the “new Arab Gulf” (Gulf cities) with “recombinant development” – a development that combines the past and the present, tradition and modernity, and capital and labor. The idea of recombinant development allows the editors to synthesize the classical economic theories, Marxist perspectives, and mainstream disciplinary approaches to mark out the four distinct features of the new Arab urban, being (a) transnational, (b) hybrid, (c) export-oriented, and (d) spatially segmented. With this synthetic approach, Molotch and Ponzini set out to solve the puzzle of why Gulf cities get built. They find the key to this riddle in what they dub “feudal monarchies” that are driven in equal parts by market incentives and ‘search for significance’ in their zest for urbanization that is birthing the Gulf cities echoing tradition and modernity, past and present, and new and old. Gulf cities are thus transnational (or global) in nature, embodying recombinant (hybrid) development. Export is the fuel that runs their economies.

The New Arab Urban, however, does not break new ground in urban sociology, as did Molotch’s famous ‘growth machine’ theory. But it does raise the analysis of Gulf cities to a new level of sociological sophistication. Molotch and Ponzini’s ambition to come up with a new theoretical and empirical framework to comprehend the new Arab Gulf also falls short. Their conclusion that the “Gulf city” is a synthesis of the past and present, featuring some elements of capital and labor with the state dominated by feudal monarchies, is at best a refined descriptive account of part of the region, but far from its generalizable and incontestable explanation. Yet The New Arab Urban is a memorable work on the urbanization of the Arab Gulf, one that will be indispensable to future research and scholarship on the region.

Tarique Niazi, Ph.D., is a Professor of Environmental Sociology at University of Wisconsin at Eau Claire, U.S.A.