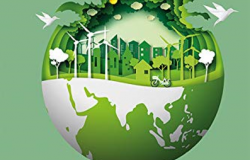 David Thorpe envisions how future cities can be made ‘sustainable.’ He swaps the term ‘sustainable’ for ‘One Planet’ to define the cities of his dream. The concept of ‘One Planet’ is, somehow, underdeveloped and undertheorized. Thorpe makes up for this desideratum by analogizing this concept to variously described sustainability ideas: planetary boundaries; doughnut economics; contraction-convergence; and regenerative cities. The latter (regenerative cities) he re-describes as ‘Ecopolis’ which too one assumes is a metaphor for sustainable cities. Yet his effort to cast a wider net to capture key sustainability ideas and bring them to bear upon future sustainable cities is compelling and admirable. As a journalist, Thorpe seems to excel in neologism and turning obscure ideas into familiar ones. A case in point is his concept of ‘One Planet’ which he extends to the builders of sustainable cities whom he calls ‘One Planeteers.’ This metaphor has sonic and substantive affinity with the term ‘pioneers’ that is used to describe historical settlers in the western hemisphere. Thorpe has a way with words, and he plays on them to his fullest advantage. Not only does this approach make the text more comprehensible, but it also enhances its readability. 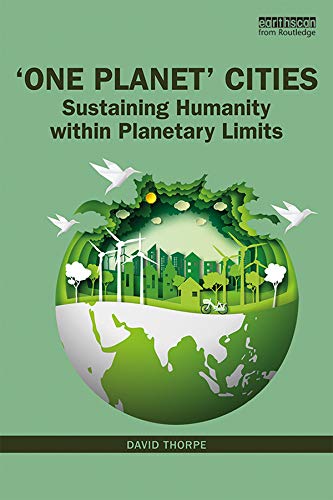 When Thorpe imagines the sustainability of future cities, he sees them bounded by the nine planetary boundaries: stratospheric ozone depletion; biospheric integrity; (chemical pollution and release of) novel entities; climate change; ocean acidification; freshwater use; land system change; biogeochemical flows (nitrogen and phosphorous flows to the biosphere and oceans); and atmospheric aerosol loading. How cities can live within these boundaries is the question that Thorpe attempts to answer throughout the text. The major takeaway from the volume is, however, deceptively simple: reducing the ecological and carbon footprint of the cities of the future which he variously calls ‘One Planet’ cities, ecopolis, and regenerative cities. This is an audacious vision when one learns that four of the nine planetary boundaries have already been breached or exceeded by humanity’s growing ecological and carbon footprint. What does it mean to breach the planetary boundaries? It means to destabilize the life support system for all life forms, including humans, that exist on this planet.

Thorpe brings another concept of the doughnut economics to bear upon ‘One Planet’ cities, which complements the concept of planetary boundaries. While planetary boundaries represent ecological limits, the doughnut economics flags ‘social limits.’ With the ring shape, “… the inner edge of the doughnut represents the sufficient level of resource use to meet people’s needs, and the outer edge of the doughnut represents the planetary limits. For the sake of fairness and sustainability, people should live within these two limits, i.e., within the doughnut itself; this is the ‘safe and just space.’ Anything less and the quality of life is reduced; anything more and we are living beyond our means” (pp. 11-12). Thorpe sums up human needs as “consumption” (of goods and services) that he concludes is at the heart of the growing human ecological and carbon footprint. He pleads for reduced human consumption and reduced human footprint. He places this plea in still another borrowed idea: contraction and convergence. “Contraction requires gradually reducing the overall level of consumption both within nations and over the whole world, while convergence requires reducing the difference between the consumption levels of the poorest and the richest (the wealth gap), to spread the benefits of technological progress to everyone. It is a simple idea, but politically very difficult to implement” (pp. 13-14). He then deftly links the idea of contraction-convergence back to the concept of doughnut economics. “Convergence is necessary for all societies to have a hope of reaching together the inner circle of the doughnut. Contraction is necessary for all societies to have a hope of reaching the outer circle” (p. 14).

Herbert Girardet, who wrote a succinct foreword of Thorpe’s book, presents a relatively radical puzzle by raising the question: ‘To sustain or to regenerate?’ He favors the term ‘regeneration’ over ‘sustainability,’ arguing that we “…live on a profoundly damaged planet. Sustaining it in this depleted condition is no longer good enough. The relationship between the way we live in our human settlements and the world beyond must become much more proactive” (xxi). He then samples a number of descriptors of future cities, such as ‘sustainable, livable, resilient, smart, intelligent and responsible,’ only to drop them in favor of the term ‘regenerative.’ He defines regenerative as “…environmentally enhancing, restorative urban systems that maintain a responsible relationship with the natural resources on which they depend” (xxi). Thorpe takes the idea of “regenerative cities” to his heart and issues an eloquent call to humanity: “It is necessary to increase the rate of regeneration in order to pay back our debt to nature and increase biocapacity” (13).

While accentuating the relevance of key sustainability ideas to ‘One Planet cities,’ Thorpe has no illusion about the world around us and its direction. He poignantly notes that only one-fourth of the Earth’s land surface has been left unmolested by human excesses. It is largely because of the uninhabitability of the remaining surface which consists of ‘deserts, mountains, tundra and polar locations.’ Yet the human footprint is inexorably extending to these hard-to-reach and hard-to-live areas as well. He cites a projection according to which soon only 10% of the land surface will be left untouched by human impact. By the end of the 21st century 90% of the world’s population will be living in cities. By 2030, the world tally of megacities of ten million each will have risen to 43, most of which in developing countries. According to one estimate, 73 million people are being added to cities each year. Thorpe befittingly calls this phenomenon the “Urban Millennium.”

Thorpe marshals evidence from continent after continent and country after country to show that ‘One Planet’ cities are possible. He finds dystopian cities and pairs them with utopian ones to show that neither dystopia is inevitable nor is utopia illusory. He picks out Dhaka, the capital city of Bangladesh, as the world’s most crowded city with 44,500 people per square kilometer, to bring out its dysfunction. He writes: “The sewers frequently block and overflow. Electricity supply is patchy. Rubbish piles are everywhere. Hours are lost every day in traffic jams. It is simply dysfunctional. … If anywhere on the planet could be considered dystopia, this is it” (p. 19). He then compares Dhaka with the island of Singapore that is densely peopled but not overpopulated “because its residents are well catered for by a well-functioning administration” (p.20). Yet Thorpe does not hold up Singapore as ecotopia either, because of its ecological footprint that, if distributed to the rest of the world, would need 3.5 planets to sustain it. Then he leaps forward to China that he writes has experienced the ‘greatest mass migration in human history’ with a growth of 463 million people in its urban population just in 1990-2015. China’s ecological footprint has jumped from ‘0.75 Earths to 2.2 Earths due to increase in income.’ Thorpe thinks that if China becomes 100% renewable, its ecological footprint will drop back to 0.68 (Earth), i.e., if the Chinese ecological footprint is distributed across the globe, it will require 0.68 Earth to sustain it.

How cities should be well-planned and well-governed is reflected in Thorpe’s native Wales in Great Britain. His signature model of ‘One Planet’ urban development is the Welsh Government’s Well-being of Future Generations Act, which went into effect in 2016. Thorpe calls the Act “one of the world’s leading examples of attempts to transform governance so that all decisions are measurably sustainable” (p. 262). To some readers, Thorpe may sound positivist when he announces that ‘what is measured is saved.’ So, he spends quite a few pages in describing metrics, methods and measurement techniques to get human impact – consumption, ecological footprint, carbon footprint, water footprint, etc. – right. Chapters 3 and 4 of the volume speak to just these indices and metrices.

Thorpe indeed gets it right that human consumption of goods and services is at the heart of the world’s ecological predicament. Also, his conclusion that regenerative cities need to go beyond curbing consumption and making their supply chain ecologically rational (e.g., reducing food miles and thereby carbon footprint) to regenerate ecosystems on which they depend is spot on. Yet he leaves the giant elephant in the oikos unmentioned: capitalist growth that is driven and measured by consumption. If consumption and growth decline, there will be no capitalism. That is why the global political economy happily bears ecological decline to keep consumption and growth elevated. It is, therefore, not cities’ compatibility with ‘One Planet’ that is in question; it is rather capitalism’s lack of compatibility with ‘One Planet’ that is creating economic and ecological dystopia from Dhaka to Singapore to Beijing to Doha. That said, David Thorpe offers a sobering analysis of the present and future urban world that provides rich food for thought. ‘One Planet’ Cities is thus a must-read for urban planners, designers, and leaders to learn how to become “One Planeteers.”

Tarique Niazi, Ph.D. is a Professor of Environmental Sociology at University of Wisconsin-Eau Claire, Wisconsin, U.S.A.