Digital Identity at the Margins 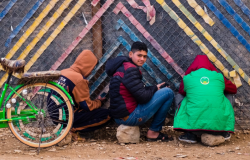 Ahmed and the Internet

Ahmed fled Daraa in Syria nearly two years ago. He registered as a refugee in Jordan, but the same registration that gives him security also means that he has to stay in the refugee camp he’s been assigned to. Yet communicating with the outside world is critical for Ahmed and his friends, which explains why they’re crouching by the fence around the compound where all the NGO offices are clustered. Ahmed explained:

“I’m using Facebook, so I have be here by the fence to get the NGO signal. There’s no internet in the camp for refugees. But we normally find a password, and get a bit of connection.”

The passwords are leaked, and the wi-fi signals are weak — but it’s their only option. The Jordanian security agencies limit the mobile network inside the camp — calls and texts only, no internet access — because of concerns about terrorism within Jordan. In the course of our research, we found many examples just like this: of how refugees find solutions in the face of restrictions imposed on them by their identity as refugees.

This ongoing research, funded by the UK’s Department for International Development, began as an investigation into data requirements for refugee camps. It includes a comprehensive literature review, field research in Jordan, Lebanon and Uganda and will complete in early May. The brief was clear from the very start: in order to make recommendations for the future, we needed to go beyond the functional requirements of service providers such as UN agencies and NGOs; we had to understand how Ahmed and others like him see the world.

We drew on two categories of identity at play in Ahmed’s experience, categories which can help us to understand the relationship between digital identity, individual agency and privacy.

Identities created by institutions and imposed on individuals are ascribed identities, and they enable those institutions to categorise individuals in order to fit them into management systems. The anthropologist James C. Scott has called this “legibility”, arguing that it is always and necessarily reductive: it reduces lived complexity to manageable simplicity in the interests of the exercise of control by institutions.

For Ahmed, the legal identity of “refugee” ascribed to him by UNHCR makes him legible to governmental and non-governmental organisations, and specifically to the management systems they rely on to provide services to people who are categorised as “refugees”. This gives Ahmed access to services — but it also constrains his mobility and access to the internet. Examining ascribed identities reveals how power is exercised by institutions over individuals.

Yet while this ascribed identity is reductive, it is also multiplicative: in addition to registering with UNHCR, Ahmed is also registered with a number of international NGOs to access food, shelter and other services. We might even say that Ahmed has multiple identities, and it’s important to understand how people experience these multiple identities because it shows how power intersects in particular ways.

Ahmed’s ascribed identity as a refugee in a camp restricts his access to the internet; yet Ahmed seeks out access because that ascribed identity does not meet all of his needs. When I asked Ahmed what he was doing on the internet he showed me his Facebook page: the friends he was chatting with, and the religious songs he was commenting on. This expressive identity was described by the sociologist Erving Goffman as a performance, one that is central to people’s social life and well being.

The importance of this expressive identity was apparent in the efforts that Ahmed went to in order to access his Facebook account and express himself. Ahmed and his friends often go to great lengths to access the internet, spending hours on the dusty road by the high fence to communicate with others beyond the constraints imposed by being defined as a refugee. The idea of expressive identities is helpful in revealing why people pursue particular behaviours which may not be make much sense at first sight.

The concepts of ascriptive and expressive identity are useful because they show how the interactions with institutions and individual expression involve vital questions of power. Ahmed’s ascribed identity as a refugee is both enabling and constraining, particularly around movement and social life. Access to a means of expression such as Facebook gives Ahmed momentary freedom to express himself and be whoever he decides to be. This in turn has implications for two concepts which initially appear quite abstract — but which have concrete impact on the well being and personal dignity of refugees.

Agency is the capacity for somebody like Ahmed to act independently. We can immediately see how his ascribed identity as a refugee takes away much of his agency, most obviously in the restrictions on his movement. Refugees face a myriad of other restrictions, depending on their local context: in Jordan, for example, it has been difficult for refugees to get work permits, which can limit their ability to provide for themselves and their families.

In return for submitting to such restrictions, refugees like Ahmed get a certain level of security and access to services. As part of the research, we looked at how UNHCR grants Ahmed legal identity as a refugee. We explored what that identity means in terms of his everyday experience, and how that identity is then used by different service providers — who may in turn ascribe more identities to Ahmed in order to provide their services.

Separate from UNHCR’s formal registration of refugees, NGOs also register refugees at the individual and household level in order to provide services. They sometimes share that data in order to coordinate those services, and this highlights a second important concept, Privacy, and the protection of personal data.

A key part of these registration processes is the collection of biodata such as name, date of birth, place of birth and so on. When you ask refugees how they feel about sharing this biodata, they often reply that it doesn’t concern them — and that in any case they don’t have a choice. Refugees continue to share personal information with NGOs even when they believe those NGOs will only use that information to raise funds, rather than provide services. They accept this as the price of obtaining legal status or accessing services, even if at the same time they believe that their data is not secure because those organisations have links to government and security agencies.

This leads many people to assume that refugees do not care about privacy. This assumption is wrong, as we discovered in our previous research with poor communities in India. While on the surface the poor and vulnerable rarely express concern about questions of privacy in the abstract, when you reframe those questions in concrete terms of potential harms that might result from breaches to personal privacy, people are very concerned indeed.

You can see this concern when people have more control over their identity, as they do with expressive identities. When we asked people about their use of social media, and particularly Facebook, we heard how vital it was to stay in touch with family and friends — but we also heard how much care they took to avoid revealing personal information, or to discuss controversial issues such as politics. They often used fake names and profile photos for fear of being identified by the regimes and communities that they’d fled. Privacy matters for all, it is vital for a sense of dignity, and for the most vulnerable, it has implications for personal safety.

Privacy mattered deeply to the refugees that we spoke to, yet their concerns are little understood by the aid industry — even though aid organisations are collecting increasing amounts of data about refugees. This data is used to support information management systems that are designed to improve efficiency, prevent fraud and monitor outcomes. While these are important institutional requirements, they do not address the privacy concerns of the refugees themselves — and in many cases they restrict their agency.

While data protection has increasingly become a priority for the aid industry, this protection should not just be limited to developing organisational policies and improving systems architecture. It should also engage with the power dynamics that are inevitably involved with identity management and service provision, grounded in the recognition that protecting individual privacy and prioritising individual agency are vital to the well-being and security of the most vulnerable.

Our ongoing research aims to provide some of this grounding for future identity systems in humanitarian response, building on our collective understanding of ascribed and expressive identities, of agency and privacy. We aim to identify practical ways in which the aid industry can take steps towards building data regimes in which the interests of refugees are placed first and foremost. Whilst our research is ongoing, it’s already clear that new systems and technologies bring questions of power and individual agency to the fore and demand greater attention if the dignity of the most vulnerable is to be upheld and maintained. Clap or favourite this piece to be involved and be informed on future updates from this emerging research.