When will Greece’s Refugee Emergency descend the EU Policy Agenda? 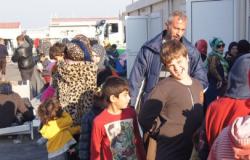 Why are there still such major variations between the increasingly optimistic EU official statements on the refugee situation in Greece and the more dismal media and first-hand accounts emerging from the field?

In its latest Progress Report on the European Agenda on Migration released on 15th November, the European Commission paints a relatively uplifting picture of the evolution of Greece’s handling of the refugee emergency. It stresses, in particular, the positive effects of the substantial funding provided through the Emergency Support Instrument on the creation of sufficient reception places on the mainland, as well as on the increased capacity on the islands. It also reports on the encouraging outcomes of the deployment of experts from Europol, the European Border and Coast Guard Agency and the European Asylum Support Office (EASO) in terms of increasing capacity for the identification of risk profiles and the fight against smugglers' networks, as well as on the overall operationalisation of Greece’s hotspots. Teams deployed by EASO, in particular, have contributed to increasing Greece’s capacity to identify and register potential applicants for international protection, as well as to conduct nationality assessments and detect possible document fraud.

The report, however, provides only limited coverage of the range of deficiencies and drawbacks that continue to define the refugee emergency in Greece. Not only that, while it accurately points to the increasingly unsatisfactory protection environment for children and other vulnerable groups, and the quality of reception places, the report concludes that addressing such shortcomings should constitute an ‘urgent priority’. Does this mean, then, that it had not been perceived as a priority for the past couple of years?

Disturbingly, the impression conveyed is increasingly one of déjà vu, with the same issues still craving for viable and sustainable solutions more than two years after the outbreak of the so-called refugee crisis. In particular, it is difficult to apprehend why problem areas such as the adverse effects of winter conditions on the often dire accommodation facilities offered to refugees, the over-crowding of most camps, the situation of children and vulnerable groups, and the considerable delays experienced by family reunification procedures enshrined in the Dublin regulation, to name but a few, should continue to top the Greek and EU policy agendas after having absorbed such an unprecedented level of policy attention and financial resources since 2015.

To date some EUR 1.3 billion have been spent in support of Greece’s refugee emergency, with the country now ranking as the largest beneficiary of EU home affairs Funds as well as the exclusive beneficiary of the new EU Emergency Support Instrument.

Despite the reach of such dedicated efforts and investments, some of the lingering shortcomings in the management of the refugee emergency to date remain astounding. To cite but one recent example, does the statement by EU Commissioner Avramopoulos on 15 November calling for all housing units for refugees to be connected to electricity and for further heating appliances to be installed in some housing units mean that the initial terms of reference for the procurement of such facilities had not foreseen such a basic requirement as access to electricity?

Clearly, the persistence of Greece’s refugee emergency cannot be attributed to any financial shortfalls anymore. Rather, it should be understood in the light of more systemic deficiencies relating to both the multiplication of actors involved in the formulation and implementation of relief measures and the increasingly deficient communication, reporting and accountability mechanisms established among them.

As a growing number of first-hand accounts indeed suggest, there continues to be insufficient oversight of the full range of commitments and outcomes of large EU-funded investments, particularly in the housing sector, which have in part been sub-contracted to a number of non-governmental organisations. The only measurable evidence in this area is that demand for temporary accommodation facilities continues to outstrip supply, despite the availability of more than adequate funds.

As German MEP Barbara Lochbihler recently emphasised on returning from a mission to Greece, at the end of October Lesbos was hosting over 5,500 people against a maximum capacity of half that number. In Chios the ratio was 2,000 to 894, and in Samos 2,400 to 700. As crucially, some 40% of the new arrivals this autumn have consisted of children under the age of six.

Clearly, Greece is not in a position to anticipate, let alone regulate, the number of irregular migrant arrivals since the EU-Turkey agreement was adopted in March 2016. Flows have tended to increase in the course of each new disagreement between the Turkish and EU authorities and they will continue to fluctuate on that basis. However, there is now a pressing need for Greece to streamline its political and administrative management of the refugee emergency, including the handling of its contractual relations with all its implementing partners on the mainland and on the islands.

This further implies that stricter external procedures to monitor and evaluate progress on both programme and budget implementation should be put in place. If necessary, the establishment of an independent mediation mechanism to improve communication among all key players, particularly between public authorities in both central and local government and international organisations and NGOs, could also be envisaged.

While it has often been surmised that the logic behind some of the current failings might be guided by Greece’s determination to prevent larger numbers of migrants from viewing the country as a point of entry to the EU, at this stage few would dispute that it has become critical for fundamental rights principles to take precedence over any other strategic consideration.

Greece should be commended for having assumed EU responsibility for the unprecedented levels of migrant inflows since 2015, a situation driven almost exclusively by the country’s geographic position and the largely ineffective intra-EU solidarity mechanisms. However, this should not continue to be a license to apply lower scrutiny and accountability standards.

Solon Ardittis is managing director of Eurasylum and a research fellow at the Institute for the Study of Labor (IZA) and at the Global Labor Organization (GLO). He is also co-editor of Migration Policy Practice, a bimonthly journal published jointly with the International Organization for Migration (IOM).Twitter: @Eurasylum