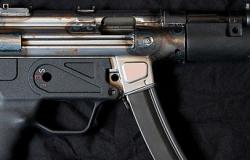 Karl T. Muth observes that while those injured and killed by guns may grab headlines, gun violence is not moving markets.

I wrote my masters degree in Chicago, a place where more people are shot per square mile per week than nearly anywhere else on earth. Gun violence is, anyone on the street in Chicago would tell you, significant. But I’m always, as someone who teaches economics, law, public policy, and statistics for a living, deeply sceptical when someone tells me that something significant occurred but there were no detectable market effects. When the trees fall in the economic forest, I tell my students, they always make a sound; the question, usually, is how sensitive our metaphorical microphones are (we call this the “resolution” of our models; I’ll touch on that later).

Usually, either the thing being discussed is far less significant than alleged, or there is a market effect that has not yet been noticed (due to inadequate measurement, too-coarse model resolution, or simply no one studying the area where the phenomenon’s effects would be detected). Usually, if the effect is large, it is priced into the market. An effect shows up in cleanup and remediation accounting (what we used to call “brownfield” accounting) in environmental contexts, in the price of option instruments in energy, in subsidies or seasonal loss accounting in agriculture, in heightened or lessened premiums charged in insurance, in taxes or tax credits in the case of the revenue authorities, and so on.

The recent tragic act of terrorism in Florida and the substantial number of people shot in Chicago (people shot in Chicago in 2016 is a number likely to exceed 2,000 by mid-July) has led some to reach the (I argue, erroneous) conclusion that firearms, by themselves, are incredibly dangerous. Yet, if true, we simply do not see this in the market-driven statistics. Yes, motivated people ready to commit criminal acts are dangerous (with or without a firearm, mind you), but firearms themselves are not moving markets.

How do I know this? By looking, for instance, at participants in insurance markets.

In my consulting work outside academia, financial services and insurance companies have been among my clients. While I cannot use any proprietary underwriting or scoring information here for obvious reasons, some things are well-known and public. For instance, if you have both a swimming pool and a firearm at your home, the swimming pool is many times more likely to kill your child. This is why insurers care if you have a swimming pool far more than they care how many guns are in your home.

This leads me to the obvious question: If firearms are so inherently dangerous, why do no insurance carriers that I know of account for their presence? This is an industry that operates on thin margins and big data – in many cases, more familiar with your automobile’s safety features than you are. Premium is adjusted by some carriers on the basis of which clothing catalogues a customer receives (a proxy for obesity in life insurance underwriting) and which seed and fertiliser contracts are chosen (a proxy for the farm’s operational diligence in agricultural underwriting). Yet I know of no insurer that asks about the presence of a firearm as part of any underwriting process.

Many American homes have one firearm or multiple firearms. By some estimates, there are more firearms than people in cities like Chicago and Detroit. Thankfully, due to common-sense weapons handling and generally-good modern firearm design, few accidental discharges occur. Of these accidental discharges, many do not cause bodily injury. Compared to these accidents that do cause bodily injury, many fewer malicious acts involving firearms in the home occur, from the data I’ve seen.

The truth is that the risk of having a firearm in the home is so small that it is nearly actuarially irrelevant. Its value as a contributor of risk to the premises and its occupants is miniscule. In actuarial econometrics slang, this is what we call D.U.S. (“dead until supered”) – the significance of the variable is so tiny that it exceeds even the most optimistic resolution rating of the model. The model would need to be exponentially better, or “supered,” for the variable to have relevance.

So where would guns show up in the numbers if they actually mattered, statistically-speaking? All over the place. Insurers would ask people like me to build a diagnostic cartography of density of gun ownership or gun violence before underwriting life insurance (I’ve never been asked to do any research project even vaguely resembling this). Economists would track the supply and price of various calibres of ammunition (as was done by economists – including me – during the shortage of, and corresponding price spike for, .22 Long Rifle ammunition last year, so it is possible though I’ve not had any client in any industry request it). Premises liability insurance would be difficult or impossible to obtain where firearms were present; in an extreme scenario, one can imagine banks that wanted armed guards would need to self-insure because of the dangers of having a firearm in the building.

But this is not how our world works. Homes and workplaces are insured similarly regardless of whether a firearm is present. Even Garfield Park in Chicago (with the highest number of reported violent criminal incidents per 1,000 people and the most drive-by shootings of any neighbourhood in America), is not a place where people cannot buy life insurance; in fact, life insurance rates are not dramatically different from surrounding areas.

To take the converse to the absurd, if gun crime were really as much of a cause-of-death or property damage contributor as the media might have one believe, the insurance industry would use ZIP code or other local murder rates to adjust life insurance and other premia. Local communities would, like containerised shipping firms did during the height of the Somali piracy crisis, hire mercanaries to protect people and assets (I spent time in Somalia in 2011 and 2012 and found the hiring of private mercenaries by shippers, communities, and local power-brokers was rational, competitively-priced, and carefully-negotiated).

The bottom line is that guns are used in some crime and do cause some deaths. Guns also occasionally accidentally discharge and cause injury or death. But, even at the level of gun-related injuries in Chicago – which is dramatically higher than the rate elsewhere in the United States and enormously higher than the rate in any city in any other developed country – the effect is still not large enough to move the proverbial needle actuarially or economically. Let me put that in perspective: About eight or nine people die firearms-related deaths in London in a given year; As I write this, fifty people have been shot in the last 24 hours in Chicago. And, even at this level of firearms-related injury and death, it is statistically insignificant in terms of market effects.

Gun-related injuries are tragic, but they are not as common, nor as significant a contributor to the total levels of injury (including fatal injury) and property damage, as one might expect from a glance at the evening news. Of course we should do what we can to discourage the illegal possession and improper use of firearms. But we should keep our view of firearms-related injuries and deaths in perspective – these incidents are so rare, so sporadic, and so unpredictable that we are unable to build economic, underwriting, or other risk models where this particular type of risk is relevant.

As I joke to my students, don’t let the statistics get you down. Keep looking up. No, literally, keep looking up, as your risk of dying in a severe weather incident is far higher (>1:6.9x10^4) than your risk of being killed by another person equipped with a firearm.

This blog is based on Prof. Muth’s personal experiences and observations examining the insurance market and other markets. It is not based upon, and does not draw upon his experiences with, client or proprietary information. Risk frequency of dying in a severe weather event taken from a non-carrier-aligned statistical repository and does not represent calculations or opinions of Prof. Muth or any insurer with whom he has worked. This blog only represents Karl T. Muth’s personal views and not the views of any client, university, or other entity with which he may be or may have been affiliated.