Don’t mention the war: Britain’s loosening grip on the Malvinas? 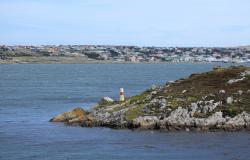 International Media Centre – G20 Buenos Aires Summit. On arrival in Buenos Aires to cover the G20 summit, it is impossible to miss the murals at regular intervals along the side of the road celebrating the heroes of the Malvinas (Falklands) conflict with Britain in the early 1980s. Everywhere you look, there are brightly coloured, frequently beautiful, sky-blue pictures of territorial maps, flags, soldiers, and military hardware adorning sometimes-crumbling plasterwork.

This history still matters in Argentina. As both a source of national pride and enduring outrage, the situation of las Islas Malvinas represents a persistent reminder of a defining episode in the country’s modern international relations. In a country that has since been beset by successive economic crises, it has also provided a useful outlet towards which political elites can direct popular discontent.

The ongoing legacy of the dispute will therefore be a live issue at this G20 summit, despite both UK Prime Minister Theresa May and her Argentinian counterpart, President Mauricio Macri, studiously seeking to minimise its potential for creating hostility in their planned bilateral meeting. Alongside the pleasantries, the former will reiterate that British sovereignty over the islands is non-negotiable while hoping to facilitate greater cooperation for their benefit; the latter will want to avoid a spat that could detract from hosting a successful summit.

Yet on the streets, and in the local media, the issue is omnipresent, not least since this is actually the first time a serving British Prime Minister has ever visited Buenos Aires. It is almost twenty years since one visited the country at all, when, in a highly symbolic moment, Tony Blair met with Fernando de la Rua near to the Brazilian border.

At government level, relations between the UK and Argentina have been thawing for some time. This may appear surprising since the positions of the two countries appear, at first glance, largely irreconcilable.

For the UK, which dates its claim to sovereignty from 1765 (with the first explorer having landed in 1690), the British-descended Falkland Islander population of over 2,500 fully deserves to have its right to self-determination respected and defended. It is not well known, however, that this is a relatively recent position on the part of London: before the 1982 conflict, the Thatcher government was prepared to turn the burdensome islands over to Argentine sovereignty, and, as the crisis unfolded, it initially contemplated shared administration as a peaceful solution. The British Nationality Act of 1981 had even explicitly denied full UK citizenship to the islanders, something that was soon reversed in 1983 after an embattled Thatcher had realised that a short, sharp war defending a plucky ‘British’ population overseas would be a powerful re-election tool.

Since then, the continued invoking of self-determination by the islanders has had a powerful effect in maintaining the status quo. This stands, of course, in stark contrast to the outrageous treatment meted out to those forcibly removed from the Chagos Islands, whose right of self-determination British governments of all stripes have consistently and unceremoniously abrogated. Nonetheless, the hardy Falklands population has held what was once considered an inhospitable set of rocky outcrops for almost 200 years, comprising nine generations. It has made such a success of its farming and fishing industries that it has begun to develop a sovereign wealth fund in preparation for exploiting its burgeoning oil reserves, and – potential protective military intervention aside – is financially independent of Britain, something that has been recognised since as long ago as 1976.

From the Argentine perspective, the British claim predates their own independence; it is therefore considered a relic of colonialism. Throughout the late 18th and early 19th centuries, de facto control of the islands passed between Britain and Spain, with both claiming sovereignty. The latter held them as the new Argentine government declared independence in 1816, believing that it should inherit any previously-Spanish possessions within its broad territory. However, a decisive military intervention in 1833 settled the dispute in favour of London. Richard Gott once described the legacy of this process thus: “People sometimes ask me why Argentinians make such an endless fuss about the islands they call Las Malvinas. The answer is simple. The Falklands belong to Argentina. They just happen to have been seized, occupied, populated and defended by Britain”. For nearly 200 years, then, the status of las Malvinas has fed a burning resentment in Argentina.

Despite this, inexorable geopolitical logic has contributed to the gradual improvement of contemporary relations, helped in part by the installation of a right-of-centre government in Argentina to mirror that in London.

Britain, for its part, has long recognised – but has been loath to say it publicly – that expensive promises of protection for a small group of people represent a questionable use of diminishing resources in a world in which its writ does not travel as far as it once did. This is evinced by the fact that the Falklands are situated 8,000 miles away across the massive expanse of the Atlantic Ocean and intransigent governments in Buenos Aires can hold an effective veto on their development. Yet for Argentina, restrictive policies based on emotive appeals to historical injustice – such as the Kirchner-era bans on flights traversing the country’s airspace and measures inhibiting hydrocarbon exploitation – are increasingly seen to benefit nobody.

So, while discussions around de jure sovereignty remain off the agenda, in reality the UK and Argentina will gradually have to move towards some de facto sharing of responsibility and reward in the islands.

It is not difficult to see a confluence of interests: Britain needs all the friends it can get after Brexit, and will not want to jeopardise a potential future UK-MERCOSUR trade accord; Macri’s Argentina needs powerful western allies as it seeks to use the current IMF agreement and a raft of highly contentious domestic reforms to resolve long-standing economic problems, secure foreign investment, and undertake a project of “global reinsertion”. A key part of this is following Chile and Colombia into membership of the OECD.

There is much to be gained from increased cooperation. Negotiations have recently secured a second weekly flight to Port Stanley from Sao Paolo (with LATAM, via Cordoba once per month). Argentina can evidently use the gradual opening of its airspace and maritime access to the islands as leverage to assist with its own reintegration into the global economy, something both Britain and the Falklanders require if their substantial oil potential is to be realised.

The wider issue here is that, as a “fading power”, a country like Britain no longer has the clout to either decisively lead global agendas at the G20, nor the resources to manage a widely dispersed network of islands across the globe. These fragments of empire, from the Caribbean to Gibraltar and the South Atlantic appear increasingly anachronistic.

As Britain is discovering painfully in the Brexit negotiations, sovereignty that is absolute on paper increasingly needs to be diluted in practice. This is particularly so when it comes to territories that are geopolitically located within different spheres of influence. Recognising this, and strategically cooperating with others to share power, will help rather than hinder its faltering attempts to find a new place in a world increasingly led by others.