We Need to Talk About the ‘Anthropocene’ 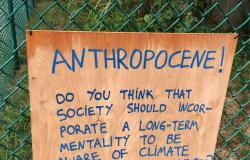 There is an enormous amount of research on how ‘climate change’ and ‘global warming’ are being reported in the media all over the world. However, since beginning to study the Anthropocene (the geological concept intended to measure and name human impacts on the Earth System) it seems that while some academics, environmental professionals, and creative artists do engage actively with the Anthropocene, most educated and cultured elites do not. It is also becoming increasingly clear that most people in the world have either never heard of it or if they have, they have no clear idea about it. While climate change is important, it only tells part of the story of the threats to our planet and us.

Why is this important?

The simple answer is most scientists researching human impacts on the Earth System believe the Anthropocene presents credible existential threats to the survival of human life on the planet in the foreseeable future. In 2011, Nobel prize-winner Paul Crutzen (a leading populariser of the term) co-authored an article in Philosophical Transactions of the Royal Society which argued the ultimate drivers of the Anthropocene ‘if they continue unabated through this century, may well threaten the viability of contemporary civilization and perhaps even the future existence of Homo sapiens’.

Researching how the Anthropocene is presented in mass media begins to answer my research questions – how likely is it that someone reading the daily news online will come across articles on the Anthropocene, and what will these articles tell them?

The project started in early 2017, and data has been collected from online searches of over 1,000 newspapers, magazines and other media websites from around 100 countries/regions from 2002 (the date of the first recorded articles) to the end of 2017. Media with paywalls and social media were excluded from the study.

The research has come up with some surprising results. Hundreds of Anthropocene articles are actually about events in the creative arts that incorporate Anthropocene references in their titles.  When it comes to the science reporting, it is the so-called ‘good Anthropocene’ that dominates press coverage, kicking the existential threats to human existence into the long grass.

Three very broad messages (Anthropocene Narratives) have been identified from the media searches:

The first two narratives are often difficult to distinguish, and they have been characterised as versions of the ‘good Anthropocene’- supported by a variety of think tanks and foundations, arguing that human ingenuity will minimise the risks posed by the Anthropocene in the various eco-systems that constitute the whole Earth System (climate, oceans, forests, soil, biodiversity, etc.). Relatively few articles advocate radical change to the status quo.

A serious appreciation of the potential dangers of the Anthropocene will provide a useful gateway for relatively uninformed publics into a variety of issues that are ignored or misrepresented by the media. It is understandable that both the science and media establishments, and the business and political interests which underpin them, would tend to lean towards reassurance rather than desperation in portraying the perils of the Anthropocene.

However, this is a high-risk situation, probably not for anyone living at present, possibly not even for their grand-children or their great grand-children, but almost certainly for generations to come. Given the continuing failures of governments and international organizations to act decisively, this is a reality that the media and all citizens need to grasp – the issue of human survival is at stake.

An open source article summarising the project to date can be found here.

Leslie Sklair is Professor Emeritus in Sociology at LSE. Find out more about Leslie’s work here. Leslie can be contacted at l.sklair@lse.ac.uk.

This post first appeared on the LSE's Researching Sociology blog.