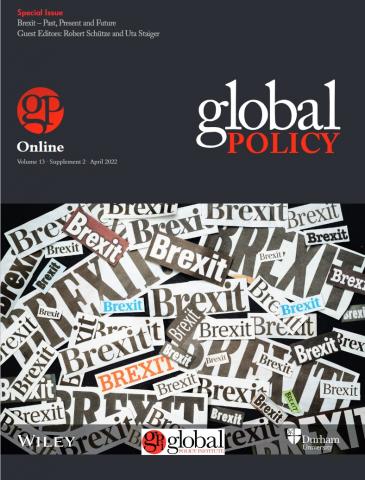 Half a decade after the referendum, the authors in this special issue of Global Policy set out to consider Brexit from a wide diachronic perspective to examine not only its complicated present, but also its past and possible future(s). The special issue's three sections contain four articles each, plus a special spotlight on the Irish border and the Ireland/Northern Ireland Protocol. Experts in history, law, political and social science gauge the ideational factors and historical pathways that prepared the way for Brexit; discuss the significance of some of the legal, formal and constitutional features of the process; and indicate probable consequences going forward. They aim to do justice to the idiosyncrasies of the UK’s exit from the EU and to draw out its wider repercussions and significance.

The Past, Present and Future of Brexit: An Introduction - Uta Staiger, Robert Schütze

Destined to Brexit? British Pathways to Membership in the European Communities 1945–73 - Wolfram Kaiser

Beyond 1973: UK Accession and the Origins of EC Consumer Policy - Brigitte Leucht

Legislating for Brexit: ‘The People’ versus Parliament? - Adam Cygan

Was Brexit a Form of Secession? - Eleni Frantziou

Movement of Goods under the TCA - Catherine Barnard, Emilija Leinarte

Brexit and the Environment Bill: The Future of Environmental Accountability - Maria Lee