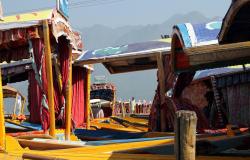 The embrace of "remote warfare" to manage conflict seeds disaster.

A week containing escalation of India-Pakistan crisis over Kashmir and the hollow spectacle of a second Donald Trump-Kim Jong-un meeting in Vietnam shows four nuclear-weapons states conducting diplomacy in an atmosphere of brinkmanship. The risks of greater conflict, and the lack of coherence in United States policy under Trump, are plain. The same vacuum is on display in Afghanistan, where the current interplay of political and military action offers only a sliver of confidence that a war now in its eighteenth year will end any time soon (see "US decline: a military calculus", 3 January 2019).

On the surface there are signs of cautious progress. A limited US-Taliban engagement, via meetings brokered in Qatar, has been under way for months. This creates a framework for possible substantive dialogue between the parties. The latest three-day encounter  on 25-27 February brought together the experienced Afghan-American diplomat Zalmay Khalilzad, the US's special envoy for Afghanistan,  and the Taliban's newly appointed political chief, Mullah Abdul Ghani Baradar.

This might even be counted as a breakthrough. Baradar is reportedly one of the Taliban's founders, and had until recently been in prison in Pakistan since his capture in February 2010 via a joint Pakistan-CIA operation. His recent release is viewed as a measure to build confidence for the Doha talks' next stage.

The wider context is that Trump wants to reduce US troop levels by at least a half this year; Ashraf Ghani's government in Kabul has little direct involvement with the Doha process, which remains essentially a US-Taliban matter; Taliban attacks against Afghan government forces continue; and a war-weary Afghan population longs to see an end to the violence.

An important factor, not well appreciated by most of the western media, is the sheer extent of this violence. The high intensity of the war over the past year is striking:  the United Nations assistance mission in Afghanistan (Unama) finds that 2018 was the worst year for civilian casualties since 2008, when its data-gathering began, with 3,804 civilians killed, 7,189 wounded, and tens of thousands displaced from their homes by conflict.

In addition, 63% of the civilian casualties were caused by insurgents, including 37% by the Taliban and 20% by ISIS, while the US and its Nato allies were resonsible for 24%, significantly higher than the previous year. Here, the increasing air-war plays an especially destructive role. The Air Force Times, a US defence journal, reports that "(the) coalition released 6,823 weapons in the first 11 months of 2018. That’s more than the 4,361 bombs dropped in 2017, and vastly higher than the 947 weapons released in 2015 and the 1,337 bombs dropped in 2016” (see "Trump's trap: leave vs remain", 17 January 2019).

In the midst of such a devastating use of air-power – and even to a degree because of it – the Taliban both survives and thrives. This uncomfortable reality for the US and its partners is confirmed by data released on another aspect of the war, namely the vulnerability of transport networks and supply routes.

A long-standing pattern of the war is that the Taliban maintains control over large parts of rural Afghanistan, with government and coalition forces clinging on to most of the larger urban areas (though exposed to attack even there). The Taliban's ability to deploy and operate across much of the country means also that it can pose a threat to the distribution of supplies to coalition bases.

The US news source Defence One reports that the risk of ambush of convoys on Afghan roads means that coalition forces are increasingly reliant on air-drop delivery. In 2017-18, the total bulk of supplies delivered by air rose from more than 15,000 kilograms to an astonishing 300,000 kilograms.

This hugely greater dependency comes in the wake of Taliban assaults on two provincial capitals, Ghazni and Farah, in mid-2018. In each case, videos of Taliban insurgents walking round markets in urban districts were spread around social media – albeit it proved a short-term victory, soon to be followed by the raiders' withdrawal as coalition forces were mobilised. The Taliban continued to target military outposts and transport links until the end of last year and into the new one.

Thus, as the diplomatic process evolves in Doha, and a distracted US president finds daily satisfaction in being the centre of media attention, the Taliban movement maintains its resilience in face of the US-led coalition's use of military power.

Washington's (and London's) former strategy of tens of thousands of "boots on the ground" has been replaced by remote warfare using strike-aircraft, armed-drones, special forces and private military companies (see "Trump, Blackwater, and private war", 24 December 2018). But even in narrow military terms, this has not worked and is unlikely to do so in Afghanistan.

It is possible that the current talks eventually bring Afghanistan's war to an end. In that case it will be a victory for dialogue and peacemaking, not for remote warfare. With Kashmir and Korea as well as Kabul in the spotlight, it is urgent that people worldwide make their leaders heed the lesson.

Paul Rogers is professor in the department of peace studies at Bradford University, northern England. He is openDemocracy'sinternational security adviser, and has been writing a weekly column on global security since 28 September 2001; he also writes a monthly briefing for the Oxford Research Group. His latest book is Irregular War: ISIS and the New Threat from the Margins(IB Tauris, 2016), which follows Why We’re Losing the War on Terror (Polity, 2007), and Losing Control: Global Security in the 21st Century (Pluto Press, 3rd edition, 2010). He is on Twitter at: @ProfPRogers