Beyond the Western Gaze: How should we talk about Covid and Africa? 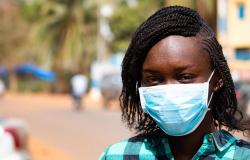 George Kibala Bauer argues that we must seek nuanced perspectives, engage with local realities, and transcend the Western gaze when reporting on Covid and Africa.

We all know the feeling—we read an article by a Western pundit, or listen to a broad-brushing intervention on everything that is wrong with Africa, and we feel the need to put the Westerner and their underlying worldview in their place. We have the rebuttals ready: “Six to seven out of the 10 fastest growing economies are in Africa,” or “The internet in Nairobi is faster than in Germany,” or “You do know that Africa is not all about huts, death and rape, right?”

I myself have engaged in a series of these rebuttals; it’s only human, and sometimes it’s absolutely necessary to provide balance. Still, we should also be aware of the crimes we might be committing in engaging in and perpetuating this pervasive binary—particularly in a context of crisis and uncertainty, and interrogate what else we could be doing to confront the shortcomings of Western reporting on Africa, particularly in the context of COVID-19.

Case in point: the drama around Madagascar’s “herbal cure.” I have nothing against herbal cures in particular. But isn’t it hypocritical to celebrate an untested cure when responding to French doctors’ suggestion that untested cures should be trialed on Africans with outrage? (I hope testing reveals that the cure is indeed useful by the way—but until then it’s irresponsible to engage in premature celebrations. To suggest that skepticism about the cure is merely a product of racism is also reductionist. There are plenty of other reasons to be skeptical about the cure, and the recent outbreak in the Malagasy city of Toamasina highlights that herbal cures in any case cannot replace and should not distract from the need of a comprehensive country-wide containment and mitigation strategy).

To be clear, the language of some Western reporting on COVID-19 in Africa completely erases the agency and ingenuity of African governments, communities, and individuals. But sometimes, Western reporting deliberately sets up a binary in order to “provoke,” generate clicks, and outrage only to then swing to the other side of the pendulum.

Many “Africa is doing great with COVID” takes are as problematic as the “Africa is hopeless in the face of this crisis” takes. They lack nuance, downplay the complexity of the situation, and most importantly still operate within the Western gaze. They also lack humility—we still have so much to learn about this crisis, and have to appreciate policy trade-offs associated with the huge social and economic costs of lockdown measures. As Teju Cole recently warned: “I keep thinking about floods, and how only after the waters recede do the bodies of the drowned become visible.”

“Hopeless Continent,” “Africa Rising,” “Afro-optimism,” or “Afro-pessimism”: These binary meta-narratives are ultimately two sides of the same coin, and they’re equally useless. It’s like when people post pictures of skyscrapers in Nairobi in response to Westerners reducing African countries to slums. Like yeah, I’ve engaged in these responses as well—but the slums still exist.

Bold policy interventions (tailored containment strategies, or innovative approaches to boosting social safety nets), civil society engagement (information sharing, community health workers, solidarity assistance), and innovations (a range of low-tech interventions, solutions from entrepreneurial ecosystems, data sharing) across several African countries are incredibly encouraging. But one simultaneously is exposed to as many disappointments—incumbents using this crisis for authoritarian means (Benin, Burundi, Uganda—to just name a few), rising food insecurity (in the Sahel or the DRC), and policy fragmentation (are African countries coordinating and cooperating as effectively as they could be; are policies actually implemented and do they reach the poorest?). The latter are topics we absolutely must debate and bring attention to as well.

Sometimes the “Africa is doing great” trope takes tend to deliberately avoid talking about certain contexts or countries. Since I’m used to the Democratic Republic of Congo being overlooked as part of “Africa Rising,” I’m familiar with these patterns of deliberate omission. Are countries that struggle or don’t fit into the binary of the day “un-African”? This also results in a lack of global attention on crucial issues: Why have the problematic electoral processes that took place in Benin and Burundi during the last week not sparked more outrage?

Linked to this is a worrying trend, which Kenyan writer and political analyst Nanjala Nyabola coined as “Man-Africanism.” According to Nyabola, “Man-Africanism can only discuss Africa by discussing the West,” and is repeatedly instrumentalized to protect powerful and rich Africans. Of course, sometimes when those rich and powerful Africans go to the UN to represent our interests it can be a useful strategy to support them. But too often is criticism, such as highlighting widespread poverty, corruption, or lack of structural transformation, being silenced or avoided in order not to “complicate the story” or undermine a certain government vis-a-vis the global audience.

Pointing to poverty, and exploitation becomes “Eurocentrism” that undermines “African unity,” while some elites continue to reinforce the very colonial systems they rhetorically despise in order to cement their grip on power. Most importantly, according to Nyabola, “Man-Africanism has the hubris of anti-colonial thought, but none of its strategic creativity.” One could also think about the shared affinity for uncritical celebrations of authoritarian developmental states among both the Western and Africanist punditry, but I digress.

Man-Africanism is deeply engaged in the politics of low-ambitions, and a fertile ground on which African elite complacency, as well as authoritarianism, can thrive. Political scientist Ken Opalo from Georgetown University expanded on this point in a recent blog:

One need not be wearing a tinfoil hat to see the many ways in which African leaders continue to act like colonial “Native Administrators.” Some do not even pretend to care about aspiring to govern well-ordered societies. For almost six decades the global state system has accommodated elite mediocrity in Africa. During this period, the collusion between African and non-African elites in the pilfering of the region’s resources was balanced with aid money and other forms of support.

As Opalo emphasizes, COVID-19 and its associated economic fallout is about to make this already incredibly expensive elite complacency “a lot more expensive.” In the case of the DRC, which is currently facing a severe recession, multiple public health crises, insecurity, food price increases, while much of the country is focused on a high-level government corruption scandal and ongoing battle for power between coalition partners, the cost of such complacency is obvious.

As we at Africa Is a Country know very well, there are many structural issues and biases associated with Western reporting on Africa, which will obviously not have disappeared when it comes to reporting on COVID-19. Criticizing the shortcomings of Western media is essential, but we also must strategically think about how to dismantle power relations within the media. Political scientist Jan-Werner Müller stresses that COVID-19 makes vibrant local news coverage vital and more important than ever. Müller worries that the recent decline of local news “has reinforced the pernicious polarization.” Local news coverage is also key to dissect other unhelpful meta-narratives such as “China is Africa’s friend vs. China is Africa’s new colonizer,” as I’ve pointed out in previous pieces on local news in Congo, and China’s Belt and Road Initiative. Media partnerships across different African countries and the diaspora such as Africa is a Country’s partnership with The Elephant in Kenya can also be part of the solution.

Ultimately, following nuanced perspectives, engaging with local realities, and transcending the Western gaze is more interesting and rewarding for anyone involved. This entire back-and-forth “Africa needs help” vs. “No! Africa can teach you lessons!” is tiring, and other than benefiting a few pundits on both sides of the debate—are we deriving any value from it? As members of the diaspora, or as members of the intelligentsia, we should also reflect on Frantz Fanon’s warnings from Wretched of the Earth:

Sometimes it is strategically important to hold your nose, and as Amilcar Cabral put it: “Mask no difficulties, mistakes, failures. Claim no easy victories.”

Rejoicing that African countries are outperforming countries like the United Kingdom in their COVID response is the definition of claiming easy victories grounded in low-ambition. Almost every nation’s response looks favorable vis-à-vis the UK. Why should a nation in rapid decline dealing with a toxic combination of regional inequality, empire nostalgia, media polarization, and nepotism be a standard for African countries?

Ultimately, COVID-19 is a powerful reminder that we must reclaim African reality in all its forms in order to adequately define and respond to the challenges we face and imagine African futures, which transcend the Western gaze. As the late Binyavanga Wainaina said so brilliantly in a talk he gave at McGill University: “Me … I don’t care about this whole Africa Rising thing.”

George Kibala Bauer is a Congolese-German economist and writer based in London. His post was first published on the Africa is a Country blog.

Beyond the Western Gaze: How should we talk about Covid and Africa?