The Role of Culture in Global Summitry: Business before Pleasure in Hangzhou 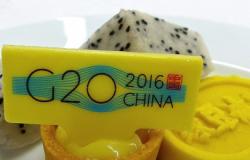 International Media Centre – G20 Hangzhou Summit. When something becomes a usual feature we tend to refer to it as a ‘staple.’ In common language we speak about dietary staples, economic staples, key staples of our success and, in regards to alcohol, you can often hear requests at the bar for one’s ‘staple please’.

Global summits also enjoy their own usual staples. For the G7/8, the selection of a beautiful location to hold the summit is seemingly a required staple. It is also usual for the media to be housed at some distance from the G7/8 Leaders Summit, thus representing something of an ‘unaccountability’ staple. For the G20, it is a staple to have the media stationed close to the Leader’s Summit and for the G20 to be held in a more urban environment. In addition, it is now a common staple that the G20 should be preceded by a number of side summits, such as the B20, W20 and J20. The main summits feature long and protracted diplomatic protocols that include plane landing ceremonies, official personal greetings, a group photo shoot, staged press conferences, and the standardised final communiqué- which have all gradually become staples of global summitry in themselves.

Another usual staple of global summitry is for the host country to promote its country’s cultural traditions and ‘cultural goods.’ For example, for the 2016 Japanese G7 Summit, a huge facility was built to showcase Japanese products such as high tech gadgets, cars, robots and wacky umbrellas. In addition, the Japanese went to great lengths to promote traditional cultural products, offering journalists sake and whisky tastings, gourmet Japanese food in the cafeteria, and endless amounts of Japanese tea. This type of cultural promotion was also a staple of the last G20 in Turkey, with a ‘cultural village’ purposely built to introduce the media and the outside world to Turkish coffee, textiles, dancing, art and music. In both cases these cultural centres were attached to the media centre and the media were encouraged to broadcast these cultural icons across the globe.

Given these staples of global summitry, it is somewhat surprising that there is a conspicuous lack of cultural promotion at the G20 Leaders Summit in Hangzhou. Given China’s recent manufacturing dominance as well as its long history, the G20 would seemingly be the ideal place for China to showcase its rich selection of cultural goods to a global audience. However, this staple is sorely missing in Hangzhou.

For one, the cafeteria is not a showcase of local products and food-crafts, but a rather banal and tasteless buffet offering a selection of Western options and generic ‘Chinese’ dishes. In addition, there are no historical or cultural displays for the media to ponder as well as no product placement (which can also go too far at summits). All in all, there is little traditional Chinese culture to be seen at this G20, with the host apparently wishing to focus on the modernization of China and with presenting a rather sterilised version of what China will become, not necessarily what it has been.

That said, the one exception is that the G20 host has encouraged the media to make their own way to the beautiful West Lake and to walk along its shore. However, this experience has been effectively sanitised of its local culture, with the entire lake closed off to the city’s inhabitants by security gates so that the few media representatives that actually find their way to the lake can take in its beauty without the disturbance of the local Chinese. The rest of the city seems to have been sanitised in very much the same way and where cultural experiences are to be had, the media must take long bus excursions to remote sites.

In many ways this lack of cultural promotion is unfortunate. This is because it sends the signal that the Chinese aren't hugely concerned with better cultural exchange and understanding via the global media, but with the creation of new business and modernization strategies that can bolster the global economy. Although a focus on the economy is of course also welcome and needed, this year’s G20 seems to be doing this at the expense of cultural exchange. What is not perfectly clear is whether this is an unfortunate oversight by the G20 host or a conscious effort to forget its own cultural staples of the past.