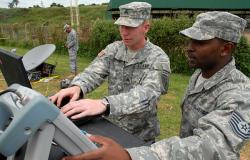 Kristin Bergtora Sandvik and Katja Lindskov Jacobsen explore how a tech-reliant humanitarian sector increasingly finds itself implicated in a global War on Data.

In 1971, the US declared a War on Drugs. In 2001, it began a still ongoing War on Terror. In 2020, the country has initiated a global War on Data to ‘combat’ the malicious collection of US citizens’ personal data. It is the first time that America is going to war for its population’s digital bodies. While this represents a further shift of the battlefield to the domains of cyberspace and trade, there is a likelihood that this war too will entail significant human suffering. This blog post thinks through the consequences for humanitarian aid, problematizing the notion of ‘digital body counts’.

In 1971, US President Richard Nixon declared a War on Drugs (WoD) to eradicate the sup­ply and demand for illegal narcotics. This global campaign consisted of drug prohibition, military aid and military interventions. The toll of this war – both human and financial – has been enormous, costing billions of dollars and taking thousands of lives annually.

In 2001, US President Bush began a War on Terror (WoT) in response to the 9/11 attacks.  This global military campaign has led to between 480,000 and 507,000 deaths in major theatres of war (Afghanistan, Pakistan, Iraq) alone. As the security and reliability of data links improved, the WoT evolved into an increasingly remote form of warfare, using armed drones. This also entailed an extension of the battlefield, illustrated by the rising number of US drone strikes in Somalia. Adding to the violence was the merger of the WoD and WoT, as illustrated by the Colombian example.

Almost 20 years on, in 2020, President Trump is now launching a ‘War on Data’ (WoDa). “At the president’s direction, we have taken significant action to combat China’s malicious collection of American citizens’ personal data”, Commerce Secretary Wilbur Ross stated in September 2020. The rationale he gave is familiar, namely that the US wants to promote “our national values, democratic rules-based norms, and aggressive enforcement of US laws and regulations.” While the other wars have depended on military tools from the outset, at present the WoDa ostensibly relies on a weaponization of trade policy, commerce and regulation – and the expansion of military logic to these domains.

While tensions around global technology hegemony has been budding for years, we suggest that the official ‘launch’ of this campaign was the US extradition request for and subsequent detention of Huawei CFO Meng Wanzhou in Vancouver December 2018 on the basis of fraud and conspiracy to circumvent US sanctions on Iran. In 2020, this campaign – also labelled a “Tech Cold War” or a new “World War over technology”  has been ramped up, focusing on restricting technology flows to China, revamping global technology supply chains, barring certain industry actors from infrastructure projects (such as Huawei’s 5G network) and attempting to curtail US users access to Chinese digital goods and platforms like TikTok and WeChat.

This is also the first time that America is going to war for its population’s digital bodies. ‘Digital bodies’ are images, information, biometrics, and other digitalized data that represent the physical bodies of populations, but over which they have little control or say. Issues of control and say are particularly pertinent where such data is stored in databases to which access may be granted (e.g. via more or less public data sharing agreements), forced (e.g. hacking), or occur as a byproduct of accidental leaks.

While WoDa at this point in time has a clearly designated enemy – China – its impact is likely to significantly impact civilian populations – and their digital bodies – globally, though likely with particular significance for populations already affected by WoD and WoT.  This is because of how digital data gathering has been particularly intense as a counterterror technology, collecting enormous amounts of digital footprints on terror suspects including where the grounds for suspicion may be weak at best (we get back to this). This requires us to think through the notion of digital body counts – not as a measure of disappeared US platform users and dead accounts, but as a critical human security issue. Crucially, we are concerned that the new WoDa is also likely to lead to bad humanitarian outcomes and real body counts. In the following, we identify three humanitarian aspects of the WoDa.

The first concerns sovereignty and data colonization of war-affected civilians. Protecting sovereignty is increasingly about protecting the sovereignty of digital bodies – though through this is a type of protection principle the US systematically ‘violates’ the to ‘digital bodies’ of other states’ populations. Arguably, a precursor to the emergent WoDa is the extent to which the US is collecting enormous amounts of biometric data on civilian populations in war zones, because the digital registration-net is cast as widely as possible, and how this data is kept by the US even after its ‘wars’ in foreign places officially ends (the case of Iraq). According to Spencer Ackerman, the US military compiled biometric data from “3 Million Iraqis,”, which the US holds onto even though troops have come home and the War in Iraq officially ended.  Similarly, UNHCR is an example of an important humanitarian actor that increasingly collects biometric data on subjects that it assists. In view of that, and related to the point about military biometrics moving beyond and maintained beyond the battlefield, it is for example noteworthy how UNHCR has an agreement with the Department of Homeland Security to provide biometric data on all candidates for resettlement – data which is kept even when no resettlement is taking place.

The second concerns Great power rivalry spilling over into humanitarian technology. Proxy wars are a staple of US global military campaigns. Humanitarians often deal with their consequences. In the WoDa, the risk is that humanitarian space itself becomes the site of a proxy war. The issue of control over data and digital bodies and the US’ aim of preventing China from collecting digital data on its citizens could have implications for humanitarian operations that increasingly rely on the collection of digital data. From a humanitarian perspective, biometric registration of beneficiaries helps agencies overcome ‘double registration’ challenges, as well as challenges related to providing donors with reliable numbers. Now, on the one hand, we have seen institutions like ICRC publish a Biometric Policy that limits data storing. Yet, on the other hand, other humanitarian actors keep adding to the list of challenges that biometrics can help overcome. Contactless biometrics as a response to “the risk of COVID-19” being but one example. The latter development calls for attention to questions about whose technology (US? Chinese? Other?) should be used for these data-gathering and storage purposes in an increasingly technology-reliant and data-enthusiastic humanitarian domain? What will be the consequences (credibility, funding, acceptance, neutrality) of the increasing tension with respect to the trustworthiness of the sectors digital infrastructure?

The third concerns a broadening of the lawfare paradigm and its negative effects. The humanitarian sector is increasingly being embedded in a lawfare paradigm, where US counter-terrorism measures and ‘material support to terror’ provisions are being globalized through strategic litigation against humanitarian actors in domestic courts coupled with blacklisting of the same humanitarian actors in global banking systems. What we now see on the horizon is the possible extension of a type of lawfare to incorporate civil society digital procurement of Chinese-produced commercial off-the-shelf solutions of hardware, platforms and networks as a US national security issue. This would greatly up the stakes for humanitarian actors, and significantly impact their ability to provide aid.

Our initial takeaway is as follows: For people in war zones, the onset of a WoDa has potentially serious security implications for communities and aid actors. This is not about abstract notions of digital bodies and virtual body counts, nor is it a question of risks to privacy and data protection only. This is about life and death. As a tech-reliant humanitarian sector inevitably finds itself implicated in WoDa, it risks becoming more than involuntarily entangled: for example the digital bodies that humanitarian practice produce may increasingly become targets in this war; because the concept and moral imperative of humanitarian aid is put into play, and finally because access to humanitarian assistance might be compromised as the sector gets further enmeshed in these great power rivalries.

Kristin Bergtora Sandvik (SJD Harvard Law School) is a Professor of Sociology of Law at the University of Oslo and  a Research Professor in humanitarian studies at the Peace Research Institute Oslo. Sandvik teaches robot regulations, legal technology and AI, legal sociology and ethics. Her widely published socio-legal research focuses on criminalization, technology and the struggle for accountability in humanitarian action. Most recently, she has published on Covid-19 tracing apps, humanitarian wearables and digital dead body management.

The death of US–China climate cooperation