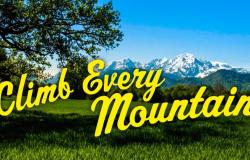 Duncan Green with a realistic yet optimistic take on making change.

I was asked to do an ‘inspirational 5 minutes’ at the end of our new-look LSE graduation ceremony just before the Christmas break (I guess they couldn’t afford Ali G, like Harvard). In many ways, I actually preferred the online to the real life version – more inclusive, and everyone can clap, whoop and holler in one go at the end (along with some extraordinary dad dancing – you know who you are), rather than a slow petering out as the students are presented from Anne Aardvark (deafening) to Zenedine Zidane (silence).

But being asked to be inspirational is like being asked to be funny – enough to send anyone into a downward spiral. Also I was knackered and probably messed it up even more than usual. So here’s what I wanted to say (in case I didn’t actually say it).

You’ve graduated with a Masters despite Covid. That’s amazing – you’ve climbed a mountain and arrived at the summit. That’s huge.

But there’s a Haitian proverb (isn’t there’s always?): ‘behind every mountain, more mountains’. Covid has certainly made one mountain more difficult to climb – getting a job. For many of you, it will be a difficult and emotionally testing few months. You will need to draw on all your reserves of self belief (as well as finance).

But eventually, I am confident you will find something that you like doing; that fulfils you. Another mountain climbed.

But there are other mountains on the horizon. That’s what I want to talk about.

LSE grads are high achievers. You have to be smart to get in, and hopefully you get even smarter while you’re with us (otherwise, you should definitely demand your money back).

But once you go back into the world, you will find that being smart, having read all the right books and papers, having a certificate to prove it, is not everything. Not even close. You need a whole bunch of other things that, to be honest, we aren’t so good at teaching, even though they can be just as important.

Most LSE grads want to change the world for the better. I’m sure some people sign up simply to improve their earning potential, but I can’t imagine they would choose International Development!

For would-be change makers, the world is pretty promising in many ways – if you believe, as I do, that ‘critical junctures’ – shocks, crises and unexpected events – often act as windows of opportunity to transform institutions, laws, policies, behaviours and norms, well, we are living through the mother of all such moments right now. What will the pandemic’s legacy be on human geography (do cities still make sense?), on how we connect (online v face to face), on institutions (governments are suddenly far more proactive on the economy and everything else), on politics (the Achilles’ heel of social and economic inequality has been cruelly exposed). We won’t know for years, perhaps decades, but it’s a safe bet that the world will not return to how it was before. In other words, plentiful opportunities to make change happen.

But the doubts and question marks around your ‘change maker’ role have grown in recent times. Questions over aid’s ‘white saviour complex’ and the role of elites (which most of your probably are, in some sense, if only because you have an LSE qualification!). Sure you need confidence; to value yourself during what could be a difficult transition, but you also need to cultivate the more subtle, human qualities of a 21st century ‘high achiever’ – helping others achieve, rather than seeking glory; being part of a movement; a servant, not a master.

So here are 4 qualities I think change makers in the 2020s and 30s need to cultivate:

The world is chaotic and inherently unpredictable. Not because you are not smart enough but because that’s how it is – it’s a complex system, with networks of causation that can never be fully fathomed.

So humility – going into any situation ready to see when your hypothesis, your initial strategy, proves wrong, is simply the only way to be. Arrogance is also ignorance.

It’s hard to live with uncertainty and ambiguity and still try to make change happen – it’s so much easier to be (falsely) sure of yourself. But that will probably lead to error and failure.

In such complex systems, you can never understand everything. New movements and ideas constantly surface from the murk. You need to be open to them – to spot them out of the corner of your eyes rather than always see through the blinkers or ‘your’ approach/project/methodology. You have to be excited (and not exhausted) by novelty. Only then can you ride the waves of change, dance with the system etc.

Just by existing, you influence the system you want to change. You need to actively try and understand that influence – starting with your own power. How does your position (age, ethnicity, gender, class, education) change what you see/hear, how you understand the world? What do people tell you/not tell you because of who you are? How do you behave in order to allow others to have agency, to lead, to work together, rather than trying to impose yourself?

Complexity means that progress often emerges from the unpredictable interaction of dissimilar players. To bring about change, long term shifts (demography, climate, social norms) interact with accidental change (eg of new technologies or markets) and with intentional change by activists, politicians, change makers of all sorts. Pursue monoculture (e.g. a room full of NGOs, or corporate executives) and you are less likely to find a way forward, to come up with something unexpected and brilliant. Learn to value and work with people who don’t think like you.

It’s not easy (was it ever?), but it is hugely exciting and rewarding. These are times of turbulence and change, whether for good or ill. Go out there and kick ass.

Why Are Monitory Democracies Not Monitoring Supply Chain Slavery?