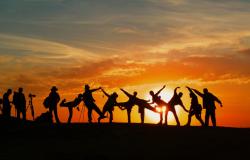 This is part of a forthcoming Global Policy e-book on modern slavery. Contributions from leading experts highlighting practical and theoretical issues surrounding the persistence of slavery, human trafficking and forced labour are being serialised here over the coming months.

Between 2018 and 2020, I partnered with the James Town Community Theatre Centre (JTCT) and James Town Walking Tours in a project funded by the Anti-slavery Knowledge Network. Our aim was to explore how arts-based methodologies might help to address the scourge of modern slavery. The JTCT were founded in 2007 in an old boxing gym a short walk from the James Town lighthouse. Founded on the principles of participatory theatre, they are a volunteer collective who use theatre to address the multiple issues that affect the James Town community, from teenage pregnancy to sanitation. One of the many advantages of partnering with the JTCT is that they are well known in the community for developing work that brings people together around complex issues. Their dialogue-based approach involves the audience in discussing the issues and suggesting solutions to problems that might otherwise seem insurmountable.

Over the past decade, there have been growing attempts to acknowledge and address issues of Modern Slavery and Human Trafficking in Ghana. These are now taking the form of policy documents developed with the guidance, and sometimes at the insistence, of the International Labor Organization and the US Government. This ‘top down’ approach, though well intended, has proven largely ineffective. Beyond headlines declaring the arrest of one or two traffickers, the widespread issues of human trafficking and modern slavery in Ghana remain undiscussed and unresolved.  There has also been increased media attention, particularly on child slavery on Lake Volta, the veracity of which has been questioned by Ghanaian politicians and academics. In James Town, an economically impoverished area of Accra, the conversation at the local level remains muted and divided: simultaneously acknowledging that Modern Slavery and Human Trafficking exist and is a problem, but just not here.

Human Trafficking continues to be an issue that is easy to ignore and the conversation on modern slavery in Ghana remains full of claim and counter-claim. Where external journalists and researchers identify what appear to conform to the Worst Forms of Child Labour or modern slavery, they are met with the response that the children are engaged in traditional forms of apprenticeship and training. Where well documented instances of trafficking for domestic service in Gulf states are reframed in terms of ‘opportunity’ and ‘international travel’. The result of this is that it is unclear precisely what can be characterized as modern slavery and what cannot. Undoubtedly, this lack of clarity is failing victims and placing people at risk.

According to the Global Slavery Index, Ghana has an estimated 133,000 people living in modern slavery and the Ghanaian Government’s response is rated ‘CC’, the third lowest. In 2017, the Ghanaian government was briefly downgraded to the lowest tier 3 category by the US State Department following their annual Trafficking in Persons (TiP) Report. The report notes that modern slavery in Ghana takes multiple forms, including mining, cocoa farming, fishing, sex work, domestic service and street hawking. Many of these overwhelmingly affect children. In James Town specifically, our research confirmed three distinct forms of modern slavery: recruitment of young boys to the fishing industry on Lake Volta, young girls being brought into Accra from the surrounding regions for sex work and street hawking, and female school leavers being trafficked to the Gulf states as domestic workers.

A further barrier to beginning a conversation on Modern Slavery in Ghana is the framing of it as a ‘development issue’. This has led to an establishment of academic and policy discourse in the area as quantitative rather than qualitative. Amongst the statistics and discussions of supply chains, the human story of children separated from their families and young women suffering abuse far from their homes are lost, which arguably further dehumanizes the victims of slavery and trafficking.

Our research, conducted between 2018 and 2020, clearly established James Town as a recruitment and destination point for modern slavery. We heard testimony from survivors who gave clear and harrowing accounts of abuse that have left permanent physical and psychological damage. The tragedy of their experiences notwithstanding, one of the clear themes to emerge from this research was the absence of any mechanism, formal or informal, for survivors to speak of their experiences, either to aid in their own recovery or to act as a warning to others. This finding was particularly striking within the context of James Town, where community links and familial ties define the fabric of day-to-day life. However, upon returning to James Town, survivors found little acknowledgement of their suffering or opportunity to engage with any state agencies.

During our research, it was clear that in order to develop any sense of the scale and character of the problem, we needed to develop contexts in which conversations could take place: firstly, between survivors and the research team and, secondly, between the survivor testimony and the community. To do this, we undertook a series of in-depth interviews with survivors who had returned to the community. The transcripts of these interviews were then developed by Nii Quartey and Collins Seymah Smith from the JTCT into a play, which was performed by the company’s actors, who are also volunteers from the community.  The performance was performed in both Ga and English, with the performers shifting between the two. This linguistic deftness ensured that the performance remained focused on the community.

The play covered two of the instances of modern slavery that had come to light through our research: the trafficking of young, educated women to the Gulf states for domestic service and the trafficking of young boys to Lake Volta for work in the fishing industry there. Whilst careful to ensure the anonymity of the individuals in question, the play clearly depicted specific instances of trafficking and slavery suffered by members of the James Town community.

The performance was shown at the James Town Community Theatre and two local senior secondary schools. In total, the performance played to nearly 1000 people and each performance was followed by a workshop facilitated by the JTCT where the audience were asked to comment on what they had seen and suggest strategies that might help the protagonists.

Certainly, there are issues with this approach. The ethics of verbatim theatre, using the real words of real people and shaping them into a performance for an audience inevitably requires changes that can alter the context or content of the words being spoken. However, what verbatim does well is communicating to the audience that what they are seeing is based in fact. In the case of Ode to the James Town Child, the facts were taken from the community and presented back to the community. These testimonies, dramatized for the performance, were the words of people that they had seen, walked past, possibly knew. They were undeniably the voices of those in the community.

As the creative team are from the community, when the play was presented, rather than feel as though an external group was preaching to the community, the play felt like a conversation. The creative team also included local musicians to underscore the piece with local music. The overall effect was a piece about James Town for James Town where audiences actively engaged in a dialogue about the suffering of individuals in their community. Seeing the human side of modern slavery, rather than a series of statistics, enabled the audiences to see victims of modern slavery not as anonymous people who have made choices they would never make, but as people whose choices are limited, whose situation and aspirations have been preyed on and who, fundamentally, are like them.

Unlike the reception of survivors returning to James Town, the reaction of the audiences, particularly the young women who identified themselves as at risk of trafficking for domestic work, were incredibly vocal and articulate. After each performance, a member of The James Town Community Theatre Centre invited the audience to respond to the play and suggest a solution. The responses ranged from trusting in god, to outrage that the government would allow this situation to happen. Memorably, one participant stated that no matter how poor they found themselves, they would eat stones rather than let their children go. In the struggle against modern slavery, the voices of survivors and the voices of the community must be at the centre of any sustainable strategy.

One of the clear successes of this project, and this approach, was the link between survivor testimony and audience reaction. Rather than considering the issue of modern slavery abstractly, the audience were invited to see experiences of people from their community and so consider potential solutions with their specific community dynamics in mind. Here, we were able to use theatre to create a forum in which the survivors were heard, sometimes for the first time, and the audience could engage directly with issues that are routinely hidden from view but the markers and drivers of which are clear to see. We are continuing this work and now aim to work directly with a local school and survivors in the community to develop arts-based community strategies for combatting modern slavery.

Writing in 1602, the Portuguese trader Pieter de Marees, observed that the slaves he encountered in what is today modern Ghana, fell into three categories: poor people unable to earn a living, people who owe a debt they are unable to pay and, thirdly ‘young children who are sold by their parents because they do not have the means to bring them up and feed them’ (Perbi, 2004, 49). Poverty remains the biggest driver in human trafficking and modern slavery in James Town, but de Marees’s observation, made over 400 years ago, is particularly bleak in its prescience. The burden of choice presented to a parent who cannot afford to feed their children or who is promised that that child will receive an education that they themselves cannot afford, presents multiple questions, each as urgent as the next. However, what is clear is that this arts-based approach to developing community dialogue is effective. Though the questions may be complex and uncomfortable, they at least require the issues to be acknowledged.

With this approach, buy-in from local stakeholders is essential. From the outset, we partnered with the James Town Community Theatre who co-designed the project. Their contacts and standing in the community enabled us to talk to survivors, local NGOs, government organizations, performers, technicians, musicians, media organizations and, importantly, audiences. Their involvement enriched the research beyond measure and enabled a process that was truly collaborative.  Working with James Town Walking Tours enabled us to produce a tour on which tourists and locals can walk the streets and learn about the links between historic and modern slavery in James Town. The issue of modern slavery, though global, is fundamentally local and personal. Hence, it is essential that those personal stories are shared, heard and acted upon within the community as it is the community that will both provide support for survivors and prevent those at risk from becoming victims.

Stephen Collins is a Lecturer in Performance at the University of the West of Scotland. His research focuses on postcolonial identities and modern slavery. He has worked in and researched various areas of Ghanaian theatre for nearly 20 years.

20 Years of Impact of the Palermo Protocol: Contestation and Reflections

The Enemy Within? Anti-Rights Groups and Restrictions on Civil Society