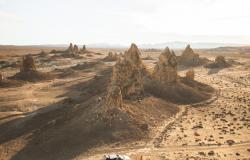 In October 2001, nearly one month after the September 11 attacks on the World Trade Center, a US Air Force pilot made history as the first person to conduct a lethal strike with a modern drone – the Predator.

In the months and years following that first strike, the drone – or remotely piloted aircraft (RPA), as it is referred to by military professionals – has become the “weapon of choice” for the states who can afford them.

The “war on terror” that ensued demanded the use of military means, but did not have the legal or conceptual legitimacy required to convince the public in Nato countries that human casualties were necessary. The “war on terror”, due to its elusive nature as a war with blurry and unachievable objectives, has resulted in the west fighting an “endless war”.

The Bureau of Investigative Journalism, a nonprofit news organisation, estimates that since 2015, the US has conducted more than 14,000 drone strikes in Afghanistan alone.

The relentless push by governments for more drone strikes has led to three key military developments. First, the global development of drones has expanded, as evidenced by the use of drones by major global powers – such as China and Russia – as well as regional ones. Many US allies and specifically Nato members are equipping their armed forces with drones, either for ISR (intelligence, surveillance, reconnaissance) missions, or to arm them and use them in combat functions.

In the European defence environment, some countries are developing their own drone production programmes.

The second development is a natural consequence of the first: in order to use drones, someone has to fly them. In a way that is hardly different from manned aircraft, a crew is required for the operation of drones. Military professionals who have been trained on the particular type of aircraft they are operating do so from within a cockpit, according to the relevant codes of conduct and laws of war.

The third development is the arming of the drone. The US began this after 9/11, but recently other countries, such as France, have armed their military drones as well.

Drones are not a modern invention – they were created very soon after the birth of aviation, with the 1920s and 1930s seeing a spike in the efforts to create a weapon that can kill from a distance. Enter the guided missile, which was remotely guided, expendable and had no surveillance capabilities.

What makes the modern drone so different is that its crew is protected from harm. It can be precise enough to avoid collateral damage compared to more indiscriminate weapons, and it is connected to a network that allows the real-time view of its feed by military and technology professionals.

The crew has to follow, survey and collect information about a target for months and sometimes years before conducting a strike. Then, drone crews have to sit through the aftermath of their attack for a “bomb hit assessment”.

There is a lack of transparency around drone operations, attributed to the highly sensitive nature of information regarding military operations. One process not often discussed publicly is the request and confirmation of authorisation (from top officials, such as the US president) before a crew engages lethally, as well as the circumstances and criteria behind target selection.

This secrecy has led to popular misconceptions about drones, how drone operations are conducted, and drone pilots themselves.

These military professionals are pilots, either allocated to fly drones, or recruited and trained exclusively for that function. While they have responsibility and accountability for their actions on a mission, both the military profession and society views them unfavourably.

Flying drones has been mockingly compared to playing video games, and drone pilots are being denied the same career opportunities as fighter pilots, as demonstrated by the lack of drone pilots in the higher echelons of the various forces that use drones.

Drone pilots experience PTSD symptoms, but are hardly taken seriously even by their military colleagues. At the same time, society’s view on drone strikes is highly ambivalent: while for some it is a necessary evil that can protect our own forces from having to deploy and engage in risky situations, for others it spells the death of military virtue.

Our post-heroic societies no longer tolerate losses of our own people. At the same time, they demonise or ostracise the very people who strive to operate in hostile environments from a distance.

Both sides have arguments in their favour, but while this discussion is taking place, the latest drone strike of August 31 in Afghanistan resulted in ten civilian deaths, seven of whom were children. This tragedy is only the latest in the death strikes that started with the attacks of 9/11 and have exacerbated society’s desensitisation of war casualties and lowered trust in international law.

Victims of drone strikes are often killed indiscriminately and without prior trial or fulfilling Geneva conventions criteria for the status of “combatant”. Two decades later, the legacy of 9/11 has been a completely changed international security environment, a distrust towards governments and their respect for human rights, and the way we fight our wars.

Photo by Arnie Watkins from Pexels

Ukraine, A Downturn for India