If Innovators can Solve India's Problems, they can Save the World. Here's Why 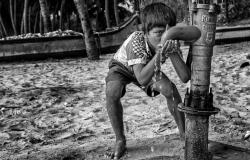 From mobile phones to reusable rockets, today we live with inventions that were once considered science fiction. These innovations have also affected our general living standards over the last millennia; the average lifespan has dramatically increased. Younger generations are connected to machines in a way that we never were. Energy continues to be consumed at a massive scale.

To say that innovation and the Fourth Industrial Revolution have not impacted those on the fringe would be an understatement. However, the fringe continues to pose a challenge in terms of its adoption of disruptive technologies. But can we look at this in an inverted, lateral way? Could the fringe be the source of the next big idea?

What is the fringe?

In the parlance of innovation, the fringe refers to the edge; those use cases that require the maximum deviation. For our purposes, the fringe is India and the subcontinent at large. India lies at the cusp of being both a developing and a developed country. It is no stranger to income inequality; India's richest 1% hold 58% of the country's total wealth. Besides India’s geographical diversity, India is also home to a vast diversity of languages. A total of 2% of the Indian population speaks English; the majority of the population use one of India’s 22 main languages. As a result, more than 98% of the population is untouched by technology and its manifestations in English; Alexa and Siri would have a hard time here.

From a road safety perspective, about 150,000 fatalities happen on Indian roads each year - around 400 every day.

Groundwater, the world’s most extracted raw material, supplies and sustains a range of human activity. Yet, because it is invisible and its supply is often taken for granted, it is often inadequately acknowledged. India extracts the most groundwater globally, amounting to 25% of the world’s total.

Air pollution, meanwhile, is increasing at an alarming rate. Particulate air pollution in India - especially in Delhi, the capital city - is consistently bad.

If this is not fringe, then what is? Seen from one angle, India is the world’s solutions provider with a $160 billion IT service industry. Seen from the diametrically opposite angle, these fringe cases put the country and its citizens at risk socially, economically and technologically.

The Fourth Industrial Revolution has seen an uptick in technologies which were in research labs 10 years ago. Artificial intelligence (AI) and machine learning have started to become integrated into production systems. India needs these technologies to solve these kinds of challenges at the fringe.

What would be some of the advantages? Here is one to start with: if a fringe case is solved via technology or design, it has the potential to be applied anywhere else in the world. The fringe takes care of edge cases, of deviations, of order within the chaos, and acts as a test bed for regression testing of a scenario.

India has been a champion of innovation since antiquity, from Sushruta, the great Indian surgeon of the 6th or 7th century BCE, to the 1,600-year old Iron Pillar of Delhi, a metallurgical marvel. In the modern era, India’s lunar and Mars missions have put her on the space map.

More pertinently, in a 2009 book the Indian-born scholar and leadership expert Navi Radjou coined the term ‘jugaad’ as any frugal solution designed to address a specific socio-economic pain-point. The stimulus for innovation tends to be a complex environment, characterized by diversity, interconnectivity, velocity, ambiguity and scarcity. India has always had all of those in large volumes.

Since Radjou’s book, debate has raged over whether frugal innovation is really sustainable or not and whether India has the capability to produce world-shattering innovation in today’s world. After all, space missions do not solve the basic needs and challenges of daily life within the country.

But there are opportunities galore at the fringe - and if these are solved, with a frugal solution designed for a subset of people or socio-economic stratum, it has the potential to scale to the rest of the world.

Here are some of those opportunities:

a) Language: Language poses one of the biggest challenges in the fringe to bring man and machine together. While a large part of western world can use technologies like Apple’s Siri or Amazon’s Alexa, 98% of the Indian population can still not talk to these machines as fluently as they would communicate in the local dialect, despite having smartphones. There have been attempts by companies to apply AI and machine learning by building massive corpuses of Indian languages, but they have not fared well in terms of dialects that the country possesses - and therein lies an opportunity. Perhaps we need to look back at Sanskrit, and the 4,000 rules with which the ~6th century Indian grammarian Panini formalised the language, and use this as a common transliteration engine for India’s modern dialects. Once this is done, the technique and algorithms could also be applied to make machines understand other languages better.

b) Autonomous driving: Some of the west’s biggest brands are developing autonomous cars. In India, however, driving is no longer a science but an art. From traffic lights not being obeyed to driving in opposite lanes to navigating past every kind of species on the road, an autonomous vehicle here would need much more than an AI system to adjust in micro-seconds and make a decision. It probably needs a change in the algorithm - and this algorithm, once devised, could take on any roads in the rest of the world.

c) Sustainability at the fringe: India’s air quality index could become the basis for applying AI and machine learning to solving most of the challenges around climate change, and could provide a new way for the world to look at some of these parameters. There are also opportunities to tip the ecological balance in technologies such as drone-based seed sowing and through predicting water table levels.

There are opportunities galore. It is about looking at them. The ideology has to change to looking for problems at the fringe, and then scaling them for the world. Innovations and solutions can start as a ‘jugaad’ - a local, frugal innovation - but it needs a keen eye to scale them to global proportions.

Today, India stands at the precipice of change. With favourable economic conditions, a noteworthy government with a will and passion to work for its citizens and the world in an attempt to make the world smaller via globalization, India as a fringe can become the innovation crucible of the modern world.