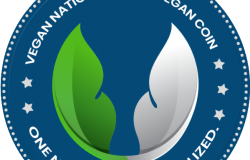 Daniel Kirby, Michael Pinney and Paul Reilly explore the prospects for VeganCoin, the ‘cruelty-free’ cryptocurrency that promises to break the blockchain mould.

Blockchain is turning vegan this month, but will it stay vegan? In just 19 days a new cruelty-free crypto currency will be launching: the VeganCoin. The company behind this digital currency is Vegan Nation; a new player in the world of ‘virtual nations’ powered by blockchain. The goal of this new platform is to build a global vegan ecosystem, with its own marketplace and dedicated currency for all of its citizens. It follows in the footsteps of Bitnation, in that it also seeks to create a virtual community – with a sense of identity and belonging for all its citizens, and the power to affect social and political change.

Vegan Nation is built on blockchain; a decentralised and global digital infrastructure that uses peer-to-peer transactions, which in turn can be used to create cryptocurrencies. Blockchain became a buzzword after the announcement of Bitcoin in 2008, with much excitement about its possible application in sectors such as education, finance and health. A decade later, new cryptocurrencies seem to be launching and failing in the same time it takes for a vegan meal to be prepared. As delegates gather this week to discuss the future of blockchain at the 10th annual World Summit on Information Society in Geneva, questions remain about whether VeganCoin will spark a new wave of ‘veganised’ cryptomania.

Critics of cryptocurrencies are sceptical about the sustainability of blockchain platforms, particularly due to the vast amounts of energy they require. At present, the electricity needed for a single Bitcoin transaction could power 1.5 homes in the US for a day. VeganCoin seeks to offset this impact, by harnessing the transparency of blockchain for environmental and ethical gain. Insofar as Vegan Nation users can only use their VeganCoin(s) on animal-free products with a low carbon footprint. But why might somebody adopt a currency which restricts their choice? By adopting VeganCoin, users are supporting the formation of a distinct vegan economy, whereby non-vegan stakeholders are not invited to the (third)party. Not to mention, veganism has always had an element of restriction involved, and adopting vegan cryptocurrencies is just the next step in that journey.

Let us also not make the mistake of assuming veganism is still a fringe movement. There has been a 350 percent rise in the number of people identifying as vegan between 2006-2016, and a 185 percent rise in the number of vegan products launched in the UK over that same period (Hancox 2018). Furthermore, 72 percent of UK millennials are willing to spend more on products that are ethically and sustainably sourced. Transparency is therefore embedding itself into the way consumers choose to buy products. VeganCoin can be used to support this given that every transaction made on its network is stored indefinitely and can be traced using blockchain capabilities. This presents a unique opportunity to reveal the life and history of a product from source to store.

Many cryptocurrencies fail in the long term due to their inability to retain user trust, which negatively impacts the level of investment they receive and their number of users. However, VeganCoin has the potential to change this due to one key ingredient; its philosophy. The currency is embedded in the value driven way of life that is veganism. It is not just a carbon-copy cryptocurrency, it is an ethically driven tool that facilitates the move towards sustainable living. For Vegan Nation, It is this distinction that may help this currency avoid the blockchain graveyard.

Despite VeganCoin being distinctive due to its philosophy, it does face some competition from other cryptocurrencies that have made transparency one of their key selling points. Ecocoin, for example, brands itself as a ‘sustainable currency for planet earth’ and rivals VeganCoin as the the leader in eco-friendly blockchain platforms. In e-agriculture, apps such as Wenda are utilising blockchain to facilitate food traceability and track air miles. VeganCoin will need to rely on its all encompassing philosophy to cement itself as a key player in the future of cryptocurrencies.

As we step forward into the fourth industrial revolution, the impacts of blockchain on our global environmental commons remain unclear. Blockchain will require collaboration between a range of stakeholders to ensure that it is developed in a way which meets the sustainable development goals. Will we build blocks for business or build blocks for a better planet?

This post is part of a series from the Global Leadership Initiative's team of eight students at the The World Summit on the Information Society 2019 from 8th to 12th April. All their outputs can be viewed here.

Back to the Future: Lessons from the 2009–2012 austerity policies for the aftermath of the COVID crisis