This is the Final Warning Sign: Stop Burning Dead Dinosaurs 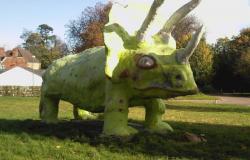 Martha Molfetas explores the IPCC's recent report and what it means for the future of our species.

If there was ever a final wake up call, this is it. The Intergovernmental Panel on Climate Change’s (IPCC) assessment for all our futures is not something to scoff at, but to rally around. It tells us largely what folks in the environmental community have been clamoring about since the Paris Agreement: we are nowhere near to reaching our global climate goals of 1.5°C, or preventing a life uninhabitable for ourselves, and generations of people who haven’t even been born yet. We need to drastically cut our global emissions and embrace climate solutions – like forests and clean energy – as if our lives depend on it, because they absolutely do. All our futures are at stake.

Despite many policy and economic wins on clean energy, we are actually polluting more now than ever. As our world’s population increases, so too does our demand for energy. Today, we are burning more fossils than ever before, with a roughly 55% increase in all fossil fuel consumption from 1990 to 2016. This is at a time when clean energy offers all of us health, climate, and energy co-benefits; and has never been cheaper. Right now, we have 405.5 parts per million of carbon dioxide in our atmosphere, something not seen on Earth since the Pliocene-era, 5.3 million years ago. That was right around the time when we evolved from chimpanzees and the Arctic was ice-free.

The impacts of carbon pollution are not isolated to creating an iceless Arctic, acidifying the oceans, or creating habitat losses for majestic creatures – pollution has a direct impact on us too. Alzheimer's researchers discovered that prolonged exposure to air pollution had a positive correlation to developing the cognitive disease later in life. Expectant mothers in heavily polluted cities, like Los Angeles, had higher rates of giving birth to babies with cognitive impairments, like autism. Not to mention the nine million people around the world who die prematurely thanks to air pollution. From cradle to grave, air pollution steals lives, or rather – we’re killing ourselves.

Environmental degradation caused by continuing our sociopathic ways, dubbed 'business as usual', causes irrevocable harm to communities at the epicenter of fossil fuel energy development, no matter where you live. In Poland, coal pollution engulfs communities, but despite the high social and health impacts, Poland remains the largest coal producer in the European Union, relying on coal for 80% of electricity generation. Families living near Polish coal power plants regularly send their children and infants to hospital with respiratory issues, thanks to the particulate pollution emitted by burning coal. These noxious chemicals are liked to higher rates of strokes, heart attacks, and cancer – killing an estimated 43,000 Poles in 2011 alone. Overall, the coal industry in Poland creates €3-8.2 billion in added health costs. Meanwhile in Nigeria, the Niger Delta saw over 550 oil spills in 2014 alone, accounting for 5 million litres of oil. Decades of negligent oil production and extraction have forever devastated an essential water source that spans 7% of Nigeria’s total land area in one of the most biodiverse places in the world. Mangroves and fisheries have been wiped out, along with local agriculture, leaving communities with an uncertain future. This cannot be the world we inherit.

Curbing our environmental pollution and addressing climate change go hand in hand, addressing them both will ensure all our futures. Overwhelmingly, people support action on climate change and cutting the cord on fossil fuels, but the political will has yet to meet rising public opinion. It might have something to do with the $125 million spent by oil companies to lobby politicians here in the United States last year. Globally, we are spending 6.5% of our GDP on fossil fuel subsidies, that’s a ridiculous $5 trillion each year.

“It is difficult to get a man to understand something, when his salary depends on his not understanding it.”

With elections coming up in the United States and elsewhere, it’s worth holding on to this historical moment and reminding ourselves that politicians have always been a renewable resource, thanks to liberal democracy.

If we continue down this path and fail as a global community, we will be dooming all our futures. We’ve all had a front-row seat to what a climate changed world looks like. Just in the last year, we’ve seen monster hurricanes and never-ending wildfire seasons in the U.S. – both fueled by our warming world. We’ve all also lived to see the once fabled Northwest Passage open up. All along with rising seas, which have put coastal communities from Florida to Bangladesh at risk of climate displacement. It’s like a paint by numbers for dangerous climate change – and this is all with less than 1°C of warming. By 2050, we could see up to one billion climate refugees worldwide, if we do absolutely nothing to alter course. As for the financial cost, American taxpayers already dole out $240 billion each year to pay for the impacts of climate change. With worsening effects, this number will only continue to grow. We have had an unprecedented opportunity to witness all this, while still having a small window of opportunity to change the tide. We cannot lose sight of this challenge.

The difference between 1.5°C and 2°C of warming are stark. The damages caused by a 1.5°C  world could cost us all $54 trillion in damages – a 2°C  world would reach as much as $69 trillion according to the latest IPCC assessment. The financial costs are infinitesimal in comparison to the lives that will be put at risk. Failing to reach 1.5°C would mean a world unimaginable. A world without coral reefs, where up to 80 million people are exposed to coastal flooding from rising seas. A world with an ice-free Arctic, where severe and deadly heat waves will be a new normal for over one-third of us. Where water scarcity will threaten the livelihood security for 411 million people – not to mention the dramatic loss of crops, plants and animals.

We have twelve years to save ourselves from this catastrophe. To do this will not be easy. Until 2035, we will need to spend an average of $2.4 trillion a year globally to transition our energy systems. We will have to expand renewable energy to provide 85% of our global electricity by 2050, in tandem with reducing our carbon emissions by 45% from 2010-levels by 2030.

Ostriches with their heads buried in the sand will still drown in our climate-changed world. So please do wake up and take notice. Climate change will exacerbate existing insecurities and redefine our very civilization. We already have the tools to do this. Clean energy is only getting cheaper. In fact, in the U.S. it’s now the cheapest available form of new energy development – without subsidies. Installing new wind power stations is now cheaper than continuing to rely on coal plants. The economic benefits of creating a green economy are boundless, from job creation to the health benefits of not burning dinosaurs. The science and technology are all there, all that is missing is the political will to make it happen. The clock is ticking. We all need to make it happen.