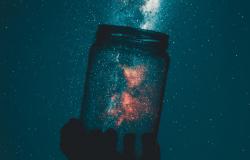 Scott L. Montgomery explores why billionaires seem to have an obsession with space travel.

Not long ago, a trip into space required years of physical and mental training. One was required to undergo a hardening of the body and honing of the mind. Much education was demanded in engineering, medicine, computer science, robotics. Dietary restrictions were imposed, abstention from certain pleasures and pursuits, removal from ordinary life. In short, one underwent a change of being, a kind of alienation, in order to leave the planet. Something else was needed too—an unspoken readiness for the shock one would face.

It was sometimes whispered, in fact, during the era of Moon landings, not without envy that only military personnel would ever be chosen for space. This was not only for their endurance and obedience, but because a stoic reserve was needed to remain unweakened by the impossible moment when the Earth, bearing all of humanity, history, and every possible future, hangs before the eye in the infinite blackness of the void.

Things are different today. All former rigor and sacrifice in preparing for space have been made to look naïve by ultra-wealthy civilians building their own spaceships and taking off. A half-century after the last lunar footprint, some on the mother world, it seems, have grown restless. “That’s too long,” said Elon Musk, after his SpaceX Falcon 9 rocket took four crewmembers into orbit in April 2021. “We need to get back there [to build] a permanent base on the moon…then build a city on Mars to become a spacefaring civilization.” Similar sentiments are held by Richard Branson and Jeff Bezos, the two others (so far) pursuing related ambitions. Only when global inequity reached such a point where individuals gained wealth on the same level as governments—at ~$202 billion, Jeff Bezos’ net worth roughly equals the GDP of New Zealand—did the idea of a personal space program seriously arrive. Governments, that is, are no longer necessary.

But why space? Why not some terrestrial challenge, like diving to the deepest point in the oceans, as film-maker James Cameron did in 2012? Aren’t there other such feats yet to be achieved? Isn’t the Earth enough for these men?

The answer, of course, is no. They own planes, estates, palaces, yachts, land, islands, as well as economic empires more global than that of imperial Britain. Should they find reason to do so, they could build their own private armies and navies. No need, however. They have conquered terrains of capital unimaginable only a few decades ago, recalling nothing so much as the aspirations of Spain and Portugal in signing the Treaty of Tordesillas (1494), dividing the world between them. Space, then, is the clear option. But be clear—these new ventures by the greatest of capitalists will not mean a democratization of the interplanetary realm; on the contrary.

The intent in all three cases is to commercialize space. If Branson plans for a new species of tourism, Musk suggests colonization, while Bezos talks in terms of industrialization. Most recently—to quell any doubts along these lines—SpaceX (Musk) is pursuing a program to sell billboard ads in satellite form. Between this idea and Branson’s for a new kind of cruise ship, one can easily see that the real “vision” is to terrestrialize the “final frontier,” or, in other terms, to recreate the world of consumerism with special effects.

Mr. Bezos’ concept is a bit different. Heavy industry, manufacturing, resource extraction, and other highly polluting facilities will be transferred off planet to space-based platforms, such as the Moon and selected asteroids. Such might seem a promise of considerable benefit for humanity. Yet one might suspect another side to the story. Who would prepare, pay for, and control this massive transfer of capital and labor? If the corporate sector, would this not put profit, branding, etc. above people, as here on Earth (in Mr. Bezos’ warehouses, for example)? Moreover, wouldn’t this grand plan qualify as an ultimate form of “outsourcing” for things like environmental damage? And if the time ever came when humans needed to abandon the Earth and go elsewhere for survival, would every living family be freely invited along, assigned a seat, given a place in the next phase of human settlement?

Mr. Bezos offers a clue to the answer in statements he made to the press after his July 2021 flight and return (wearing a cowboy hat):

“When you look out at the planet, there are no borders. There's nothing. It's one planet and we share it and it's fragile."

"We have to build a road to space so that our kids and their kids can build a future…We live on this beautiful planet. You can’t imagine how thin the atmosphere is when you see it from space."

“I also want to thank every Amazon employee and every Amazon customer because you guys paid for all of this.”

The last quote, which has magnetized no small current of criticism, is particularly honest.

Apparent innocence in the first two statements reveals an inability to articulate the experience of space beyond cliché. Meanwhile, Mr. Bezos, who wants to save the planet, can only do so on the backs of low-wage workers, enormous numbers of them (by mid-2021, Amazon had 1.3 million employees, most of whom are hourly). These workers, confined to massive warehouses, must perform at the pace of a fast-motion assembly line, as in Chaplin’s Depression-era classic, Modern Times (1936). In the name of humanity, Mr. Bezos calls for global unity, though on Earth he has created an anti-union culture. He wishes to save our planet for anonymous generations of the future, yet, in the present, his warehouses have an annual turnover of over 100%. The planet, he finds, is beautiful and fragile. He seems immune to the fact that wealth like his own—modeled on that of Andrew Carnegie or J.D. Rockefeller—is inseparable from an immense carbon footprint that no green offsets can delete.

Carnegie and Rockefeller succeeded by building their enterprises into well-lubricated, pitiless machines, cutting costs at every turn and increasing efficiency with relentless fervor. Amazon is no different; it has the advantage, however, of advanced technology. Workers are monitored digitally, their labor precisely measured and ranked, to a degree that captains of f 19th century industry would love. The ironies and disconnections that Bezos reveals between his plans for space and his practices on Earth are also fundamentally the same as those of his predecessors. Carnegie’s famous essay, “Gospel of Wealth,” opens with these words: “The problem of our age is the proper administration of wealth, so that the ties of brotherhood may still bind together the rich and poor in harmonious relationship.” Bezos’ final statement above is a simpler, slightly more honest version.

Judging from videos taken during the voyage, the journey was more of a carnival ride for him than an awakening or exploration. But this makes sense: the truer gamble and risk was the building of his company, Amazon. What this has meant, however, is an ironic loss. At the very moment when the billionaire self, rising over the planet, attains its apotheosis, it is erased by the lack of an equivalent response. Having built an empire and ventured beyond gravity, Jeff Bezos has nothing important to tell us. Such may be the most significant message of all.

What does it mean, after all, to physically “leave the world behind”? In fact, the discourse about “going into space” has not changed over the decades. The term “escape” still describes the act of going beyond a planet’s gravitational pull. Might it be mortality itself, then (the most Earth-bound of finalities), that the billionaire seeks to rise above, if only for a few moments? Or, in a different sense, does the civilian experience of rising like a god above the insect struggles of the common people offer the man with the wealth of a thousand generations a taste of eternity?

Yet, this leaves out the matter of a higher purpose invoked by all three gentlemen (but why no women?). This, too, recalls Carnegie’s text. His “gospel” demanded that “surplus wealth” be devoted during the lifetime of its owner to the common good, e.g. founding a university, hospital, libraries, museums, and so forth. Such would allow, in biblical terms, the rich man a reserved seat in the kingdom of heaven. For the 21st century, however, such ground-based philanthropy as a basis for the grand ascent is no longer sufficient. As a savior, one must pave a path to the celestial realm itself. Bezos, Branson, and Musk, all businessmen, do not view themselves as messiahs (Musk occasionally excepted) but as secular prophets. Their space ambitions are the embodiment of our era’s return to an obsession with wealth and technology as the key forces to build “a better world.” Their visions—tourism, colony-building, industrial development—are hardly the stuff of prophecy. They are more in the way of

This, finally, evokes the question of what real astronauts saw and felt in their own historical period. Neil Armstrong’s marmoreal phrases from the Moon’s surface are too iconic to be of service. Instead, considering Bezos’ own words, here are statements by Richard Truly, 1980s commander of the Space Shuttle:

One of the things that struck me on my first day in space is that there is no blue sky. It’s something that every human lives with on Earth, but when you’re in space, you don’t see it. It looks like there’s nothing between you and the surface of the Earth. But when you look at the Earth’s horizon, you see an incredibly beautiful but very thin line…That thin line is our atmosphere. And the real fragility of our atmosphere is that there is so little of it.

Photo by Rakicevic Nenad from Pexels