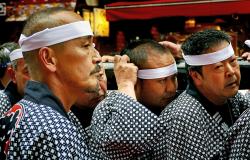 Global Governance Futures 2030 fellow Ryo Ishida on why Japan's cities are fit for its aging population.

We often hear how rapidly the population is growing in many cities, and about accompanying challenges such as congestion or housing shortages. Some countries, on the other hand, are experiencing the opposite trend: a shrinking and aging population. Russia, Italy and Japan have already started losing their populations. Germany is expected to follow this trend by 2020 and China by 2030. Aging societies will be more common: seniors (people above 65 years old) accounted for nine percent of the global population in 2015, and this figure is expected to rise to 22 percent by 2050.  More than a quarter of the population is senior in Japan, and other developed countries will shortly reach the same level: Germany by 2030, France by 2035, and even China by 2045. This demographic shift poses a different set of challenges from those currently faced by growing cities. For these mature cities that have passed their phase of economic and demographic growth and started to stabilize or decline, adapting to these challenges presents an opportunity for them to become alternative models for sustainable societies. Aging and shrinking cities are a real challenge: neglecting them will threaten the very basics of economic and social infrastructure.

Japan is the country hardest hit by the aging demographic challenge and some Japanese cities have already started to lead the way, applying solutions with tangible results. Although these solutions are not universally applicable, the way these cities approach the challenges they face is an example of how we can work towards sustainable societies. In doing so, Japan can offer leadership on an issue that could have global ramifications.

Japan’s population started to shrink in 2008, and by 2065 it will lose 40 million people – a third of its current population. Seniors account for 28 percent of the Japanese population. This ratio is estimated to increase to 35 percent by 2030 and 40 percent by 2060. This demographic shift is accompanied by many other social and economic challenges: by 2030, a third of housing in Japan will be vacant, and by 2040, 896 municipalities in Japan (more than half) are at risk of disappearing as they lose women of childbearing age. These challenges are especially visible in second or third tier cities – those that are not regional economic or political centers.

Three case studies show how Japanese cities are transforming to meet the challenge of being a mature city:

Toyama is a north western city with a population of 400,000. To prepare for the coming population decline, in 2006 the city started developing a master plan – the compact city strategy. The plan included the concentration of public transportation in targeted areas, as well as financial incentives. It supported developers to focus future investment in the central area, and incentivized residents to relocate to this area. As a result, the population became more concentrated in the central area. An increase in public transport usage, land price increase and a decrease of spending in the non-target area resulted in a more balanced city budget.. Toyama aimed for “soft relocation” using incentives and by making the central area more attractive, rather than “hard relocation” that relies on government decrees forcing people to leave. This takes longer, but preserves local communities and results in higher levels of resident satisfaction.

Inagi, located in the west side of the Tokyo prefecture, introduced the “Caring Volunteer System,” in 2007. To cope with the increasing care needs of elderly people, the city’s system engages elderly people in nursing activity as volunteers.  As a reward, volunteers receive discount on nursing insurance for the future. The system has three effects: firstly, reducing the cost of nursing by leveraging volunteers; secondly, keeping volunteers themselves healthy by providing opportunities for moderate exercise in the form of nursing and engaging in social activity; and lastly, building local community spirit.  In 2017, there were some 670 volunteers registered, none of whom came to require nursing care themselves, thus bringing down the city’s overall nursing costs.

In 2015, western Japanese city Maniwa established a woody biomass power plant that generates energy from locally-sourced and otherwise unused wood. The plant can cover more than 100 percent of the local energy demand. The city also started a woody biomass refinery business which uses the byproduct wood used for power generation. The initiative has helped the area become energy independent and more sustainable, has helped preserve the forest by thinning out excess wood, and generates local employment. The plant performs well financially and initial investment in the powerplant will be paid off within several years. Maniwa’s power plan is an example of how areas with a shrinking population can move away from energy systems with heavy infrastructure to “smarter” solutions better suited for small energy demands.

These examples are illustrative rather than holistic. Such solutions also need to be tailored to local realities, taking into consideration transport, infrastructure and cultural factors, among other things. They are more applicable to cities with a high level of infrastructure, such as major cities in China, Germany or France. Cities with less established infrastructure, such as those in Russia, need to firstly establish basic healthcare and transport systems. Prioritizing specific areas may even trigger the relocation of the senior population. While each city needs to consider these specificities, there are basic principles that every city needs to consider: solutions to these challenges require a combination of economic, political and social approaches. Planning and governing mature cities requires a fundamentally different mindset from that needed for growing cities: cities need to start by accepting the tough reality of their aging and shrinking population, choose least bad scenario, and set and pursue priorities with conviction. Meticulous local coordination is also required. To shrink, cities need to start from what and who is already there. This makes the execution slow and bottom up. Many policies require strong and often difficult judgements, such as choosing to cut out certain areas in order to save the entire city.  But ignoring the challenge will only worsen the situation and threaten transportation, housing, healthcare and energy – the very basics of economic and social infrastructure.

Ryo Ishida is the Founder/CEO of MyCity inc. He is Global Governance Futures 2030 fellow. The views expressed here are his own.