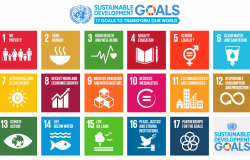 Peter Edward and Andy Sumner argue that to end poverty, we must address the political challenges that come with improving the governance of economic growth.

Ending global poverty has long been an aspiration of the United Nations. This aim forms a centre-piece of the Sustainable Development Goals (SDGs), which set a target to “end poverty in all its forms everywhere” by the year 2030. The recent report presented at the UN’s Human Rights Council session in Geneva by Philip Alston, the outgoing UN Special Rapporteur on extreme poverty and human rights is a timely assessment of the current state of progress. His report, The parlous state of poverty eradication, is a hard-hitting refutation of the widely-held perception that the world is well on the way to eradicating global poverty.

On first glance, it appears that the SDG agenda is within close reach, as since 1990, global poverty at the $1.90-per-day mark has more than halved, plummeting from 1.9billion to about 0.7billion. What’s more the decline in the global poverty headcount has been underpinned by dramatic growth in global output and consumption, both of which have more than doubled since the end of the Cold War. Alston’s concern is that by relying predominantly on these headcounts, not least in the SDGs, the UN lends its support to a self-congratulatory narrative of poverty reduction that is highly misleading. Further, that these headline figures provide substantial backing to the idea that economic growth alone will provide an eventual end to poverty.

So how accurate is that take? Since all international poverty lines are somewhat arbitrary, one major point of contention is over-reliance on any poverty line, including the $1.90 ‘extreme poverty’ indicator set by the World Bank, as a basis for drawing sweeping conclusions about either the current state of global poverty, or the interaction between poverty levels and economic growth. Economic growth is so often championed for its poverty-reducing impact due to the decline of extreme poverty headcounts occurring alongside recent periods of sustained global growth. What is less discussed, though, is that just a 10-cent difference in the choice of poverty line can add a staggering 100 million to the global poverty headcount. It is important therefore to acknowledge that how we consider the statistics is central to the conclusions that we draw, as the specific poverty line we choose to adopt can significantly alter the narrative told on how effective economic growth has been in reducing world poverty.

If a more skeptical approach to analyzing global poverty data is taken, cracks begin to appear in what seems at first glance to be an irrefutable success story on the impact of growth on poverty reduction (and even raising questions is sufficient to get folks annoyed).

This is not to say that the income growth among the poorest people in the world that has happened does not matter. Clearly it is a better outcome than deterioration. The issue is that setting very low poverty lines and communicating the trends with those lines may lead to a narrative that absolute poverty (the extreme label tends to get forgotten) is virtually eradicated or soon will be. What is presented in poverty measurement as a technical, apolitical measurement issue is highly political. Put another way, global poverty reduction since the Cold War has been mostly about moving people from slightly below to slightly above a very low poverty line. A more important question is why, given the amount of economic growth in developing countries, has absolute poverty not fallen at more reasonable poverty lines?

What we can say is that it wouldn’t have taken that much redistribution to have ended poverty already at $2-per-day. Consider, for example, that those living on less than $2-per-day captured a mere 1.9% of the global consumption increment since the Cold War. Had they instead captured 3.3% of that increment, then poverty at the $2-per-day line would have been eliminated in its entirety by 2012. This means that just a 1.4% increase in the proportion of the global consumption growth increment accruing to the world’s poorest people would have been enough to end poverty altogether at the $2-per-day line some eight years ago.

Perhaps even more surprisingly, the additional resources needed to end $2-per-day poverty could quite easily have been redirected from the richest global 10% of the population - those consuming over $30-per-day - without having any significant, or indeed perhaps even noticeable, impact on the consumption levels of this group. For the richest decile of the population captured 39.1% of the consumption growth increment from 1990-2012, and had just 1.4% of that increment been redirected to the $2-per-day poor, they would still be left with a huge 37.7% share. This modest amount of redistribution of growth could have been achieved with fairly minor tax and transfer adjustments. One could even go so far as to call it ‘global philanthropy’.

That being said, $2-per-day is still an incredibly low level of consumption, and eradicating poverty at more reasonable levels would require more significant redistribution efforts. Take for example the $4-per-day mark. This target could also hypothetically have been achieved already whilst still having allowed for a much larger share of global consumption growth to have accrued to the richest decile of the global population, yet it would have required a more substantial shift towards stronger global and national welfare regimes. So, if $4 or higher poverty lines are to be ended in any reasonable timeframe, a much greater focus must be given to the governance of growth - managing the distribution of growth to determine whom exactly benefits from it - in the near future.

Hence, the question everyone today should be considering is not really can economic growth end poverty, but rather, how can the overall efficiency of the distribution of economic growth be improved so that poverty can be eradicated faster. One might even say that the long-standing over-emphasis on reducing poverty measurement to the extreme poverty level serves to obscure just how different the governance of global growth must become if more substantial progress is to be made in ending poverty in its various forms by 2030.

The challenge of eradicating poverty across a range of poverty lines by 2030 would require vastly different degrees of distribution of future global growth, ranging from just minor tax and transfer adjustments to a wholesale reform of the current form of capitalism (Something the FT is running a series on).

Yet if the SDG agenda is taken seriously it is time to abandon the focus on arbitrary poverty indicators, and rather begin recognising, discussing and addressing the political challenges that come with improving the governance of economic growth.

Peter Edward is a Lecturer at Newcastle University Business School, UK. Andy Sumner is Professor of International Development at King’s College London. Their book, The End of Poverty, is published by Palgrave MacMillan.

Deaths vs. The Economy: An Unexpected Reversal