Vikalp Sangam: A Search for Alternatives in India…and Globally 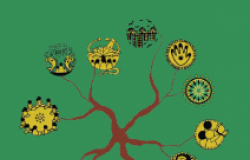 Pallav Das and Ashish Kothari explain the need for alternative visions to the dominant model of economic development in India, and beyond. Pallav and Ashish are two of the founders of Kalpavriksh, a 40-year Indian NGO focusing on environment and development issues.

Contemporary India is going through a perplexingly critical time in its economic development, as it seems that every step it takes towards tackling poverty further pushes the country deep into the swamp of environmental degradation. Home to six of the ten most polluted cities in the world, with its natural resources being plundered rapaciously to realize an ill-conceived vision of development and its weather patterns becoming increasingly erratic and often lethal, the country seems to be hurtling ever forward towards ecological mayhem.

Moreover, the agenda being foisted on the Indian people is deepening already entrenched social inequities and suffering caused by patriarchy and casteism. The richest 10% in India now hold 3/4 of the total wealth. The super rich, the top 1%, now account for nearly half of the country’s total private wealth, about $1.75 trillion! Meanwhile, India’s share of the world’s extreme poor is still about one third.

Despite this bleak picture, however, there are significant efforts being made by civil society to construct alternative paradigms and pathways towards a world that is sustainable, equitable and just. These are frameworks and visions that aspire to bring together the existing heritage of ideas and worldviews, and cultures, which still survive in the country, particularly amongst the indigenous communities, combining them with new progressive ideas and grassroots practice. Movement activists, academics, thinkers and practitioners of alternatives, indigenous and rural communities, artists and communicators are coming together.

Vikalp Sangam, or the Confluence of Alternatives, is a unique initiative to explore and understand alternative thinking and organizing on a large spectrum of economic, social and environmental issues in India. The chief aim is to create a platform where alternatives that don’t rely on ecological self-destruction and the bitter calcification of economic inequality, reach a large audience and become viable for discussion, analysis and eventual replication in other places.

Vikalp Sangam is a collaborative effort that started in 2014 by four prominent Indian civil society organisations, Kalpavriksh, Bhoomi, Shikshantar and Deccan Development Society which have been actively seeking solutions to environmental, developmental and educational challenges confronting the country.

But, why are we searching for alternatives in the first place? It’s true that movements can periodically encroach upon the accumulated power of the ruling elite, but only an alternative way of thinking and being can ensure the equitable distribution of economic, social and political power within the society. From the perspective of meaningful change the most important question is, are contemporary movements able to demonstrate that they’re not only questioning and resisting the existing structure, crucial as that is, but also have viable, well thought-out alternatives to offer? Moreover, are such alternatives already in action in some form and, in fact, showing promise for scaling up?

What counts as an ‘alternative’? What are its underlying principles?

Let’s take a look at what constitutes an alternative. According to the “Alternatives Framework”, which is in a continuous process of evolution through discussions among the Vikalp Sangam participants, “alternatives can be practical activities, policies, processes, technologies, and concepts/frameworks that lead us to equity, justice, sustainability. They can be practiced or proposed/propagated by communities, government, civil society organizations, individuals, and social enterprises, amongst others. They can simply be continuations from the past, re-asserted in or modified for current times, or new ones; it is important to note that the term does not imply that these alternatives are always ‘marginal’ or new, but that they are in contrast to the mainstream or dominant system.”

The Vikalp Sangam process is rooted in the realization of the ecological limits of human activity and the consequent rights of nature to survive and thrive. Committed to simplicity and sufficiency, Vikalp Sangam advocates self-reliance in meeting basic needs of the people as well as respect for the dignity and creativity oflabor and work, and equity between physical and intellectual labor.

In the same spirit, the governance model is also designed to be closer to local rural and urban communities linked at bioregional, eco-regional and cultural levels such that each person can participate meaningfully with largely face-to-face decision-making as part of a participatory democracy. Ultimately, the process emphasizes the inextricable interconnectedness between humans and their environment, as well as the intrinsic relationship between cultures, ways of living, knowledge systems, values, economies and livelihoods, and polities.

The Vikalp Sangam process is geared towards the propagation of this idea of “alternatives”. In the last three years the initiative has established an active website for dissemination of news and views on the “alternatives” to bring thinkers and practitioners together to learn from each other and to further sharpen the debate (for reports on these and other related material, see here ).

These Vikalp Sangam deliberations have resulted in the following five interconnected and overlapping spheres as the cornerstone of the exploration for alternatives:

For the Vikalp Sangam framework, the “center of human activity is neither the state nor the corporation, but the community, a self-defined collection of people with some strong common or cohesive social interest. The community could be of various forms, from the ancient village to the urban neighborhood to the student body of an institution to even the more ‘virtual’ networks of “common interest.”

The inputs coming to the Vikalp Sangam discussions are based on the alternatives experiments being conducted by organizations all over India. Let us give you an idea of the various experiments taking place:

Alternative economies & technologies: initiatives that help to create alternatives to the dominant neoliberal ‘logic’ of growth, such as localization and decentralization of basic needs towards self-reliance, respect and support of diverse livelihoods; producer and consumer collectives; local currencies and trade; the gift economy; production based on ecological principles; innovative technologies that respect ecological and cultural integrity; and moving away from GDP-like indicators to more qualitative, human-scale ones that account for well-being.

Alternative politics: people-centered governance and decision-making, including forms of direct democracy or the Gandhian idea of swaraj in urban and rural areas; re-imagining current political boundaries to make them more compatible with ecological and cultural contiguities; promotion of the non-party political process; methods of increasing accountability and transparency of the government and of political parties; and progressive policy frameworks.

Energy: alternatives to the current unsustainable sources of energy, including decentralized, community-run renewable sources and micro-grids; equitable access to energy; promoting non-electric energy options such as passive heating and cooling; reducing wastage in transmission and use; putting caps on demand; and advocating energy-efficient materials.

Livelihoods: the search for alternative, localized economies; satisfying, dignified and ecologically sustainable livelihoods and jobs including traditional occupations that communities choose to continue, such as agriculture, pastoralism, nomadism, forestry, fisheries, crafts, and others in the primary economy; or jobs in manufacturing and service sectors that are ecologically sustainable and dignified.

Food and Water: security people’s sovereignty over food and water, including ensuring community control over processes of food production and distribution, and the commons from where uncultivated foods are obtained; sustaining the diversity of Indian cuisine and promoting uncultivated and ‘wild’ foods; use and distribution of decentralized, ecologically sustainable, efficient and equitable producer-consumer links; making water storage a priority and promoting democratic governance of water and wetlands.

Similar experiments are taking place on Health and Hygiene, Learning and Education, Settlements and Transportation and Culture and Media. A huge treasure trove of opinions, facts, theories and data is emerging. We believe it shows the way towards the creation of what we call “Radical Ecological Democracy”, based on climate justice, environmental sustainability and socio-economic equality.

Finally, we’re also exploring the possibility of replicating the Vikalp Sangam model at an international level. A one-day Sangam has already taken place in Lebanon, involving groups from Jordan, Egypt and Palestine. And now a Global Tapestry of Alternatives is to be launched soon, building on the experience of the Vikalp Sangam and similar processes elsewhere such as Mutua Crianza in Mexico. The idea is to enable exchange of experiences amongst the myriad movements for justice and ecological wisdom, to mutually strengthen each other, collaborate on activities, and create a stronger political mass for transformation.

We are convinced that human wellbeing can be achieved without endangering the earth and without leaving behind more than half of humanity.

Ashish Kothari: Ashish is the co-editor of Alternative Futures: India Unshackled, a collection of 35 essays on India’s future, by a diverse set of authors – activists, researchers, practitioners, media persons, policy-influencers; and of Pluriverse: A Post-Development Dictionary, a compilation of over 100 essays on radical alternatives from around the world. Pallav Das:  Pallav curates the Radical Ecological Democracy platform, and his conservation work has contributed to the preservation of threatened habitat areas in South Asia, particularly in the Himalayas.

A longer version of this post was first published in Empowering Nonviolence, a project by War Resisters International.

The Shameful Implosion of UK Aid