Book Review - Humanitarian Rackets and their Moral Hazards: The Case of the Palestinian Refugee Camps in Lebanon 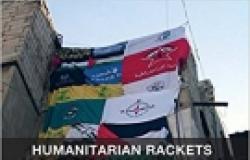 Rayyar Marron’s book provides a critique of how academic and activist accounts of Palestinian refugee camps end up reinforcing the humanitarian narrative of refugee victimhood. By underlining refugee economic and political agency, especially in the camp of Shatila in Lebanon, Marron recounts economic fraud and tactics that not only guarantee refugees’ survival and empowerment, but also seek to suggest a de-romanticised configuration of ‘refugee’ within the Middle Eastern moral economy. The author questions human suffering underlying the formulation of social and humanitarian policy. In this vein, in the scholarly literature, camps are defined not only as “sites of exilic nationalism” (p. 5), but also of resistance (p. 4). In this context, Marron contests how “Palestinianness” is addressed as a mere humanitarian cause, where refugees are passive aid recipients in need of international compassion.

The book is composed of an introduction, seven chapters, and a brief conclusion. The lengthy introduction aims to collocate the book within the framework of the de-romanticisation of vulnerability and of refugee agency: but it struggles to anticipate the core arguments. Chapter 1 intends to show how Palestinian refugees themselves seek to repackage their originally military cause as humanitarian due to the decline in funding, therefore often portraying themselves as “dispossessed peasants” (p. 44). Marron emphasises the identity crisis through which Palestinian refugees in Lebanon passed through when the Palestinian Liberation Organisation (PLO) was removed from Lebanon in 1982. Nevertheless, the chapter loses the opportunity to accurately describe what the author sees as a crucial historical moment, when Palestinians dropped the militant guerrilla culture as a public discourse to embody the exceptional case for assistance. More attention to this historical moment would have unraveled how the Palestinians’ unethical tactics to guarantee everyday life – such as smuggling and political protection rackets – are actually connected to daily grievance. The author, making the important attempt to de-romanticise the refugee category and refugee agency, however ends up focusing only on one side of the coin, providing a predominantly negative representation of camp society. A nuanced approach to examining everyday life would instead have informed the longstanding dialectics between need and greed in refugee economies.

Chapter 2 suggests the emergence of a Palestinian nationhood in connection with the pan-Islamic and pan-Arab cause (p. 50), in a complex framework of foreign state patronages. Marron specifically argues that a Palestinian sense of national belonging precedes the PLO battles, while providing shy hints of this pre-exilic society. This chapter does not provide the specificities of whom, where, and what led humanitarian definitions and practices to a negatively nuanced – but under-explained - everyday racketeering and appropriation.

In Chapter 3, the author argues that the PLO and the Palestinian political movement of Fatah radicalised the political landscape in Lebanon, seeking direct influence from within the formal institution of the parliament (p. 76), or through studentships, as cadres of Fatah enrolled as students in Lebanese universities (p. 78). By conducting robberies and soliciting funding, the PLO and Fatah militarised the civilian refugee community, raising violence in the camps. The author describes the “neopatrimonial” tendencies of Fatah and the PLO in terms of “self-enrichment” rather than the official rhetoric of the “revolution” (p. 87). Marron thus opposes the narratives that depict the so-called Palestinian revolution as an effort against Lebanese sectarian politics.

Chapter 4 highlights the challenges of organising camp society outside of patronage legacies. The pervasive influence of factional politics on refugee lives is in fact mentioned as the most deleterious issue for the Palestinians, rather than poverty or lack of infrastructure per se. On the one hand, the chapter is not too convincing in the attempt to incorporate humanitarianism into the discussion of patronage, where political groups compete for assistance, recruiting their families and allies in the capacity of beneficiaries or employees within humanitarian projects, including the United Nations Relief and Works Agency (UNRWA) (pp. 93-95). On the other, the author clearly shows how camp dwellers challenge the legitimacy of the popular committees, as they represent the interests of proxy states to the camp society (pp. 103-104). Marron here opposes the tendency of the scholarly literature to separate out the Palestinian oppressive sovereigns from the refugees.

Chapter 5 provides accounts of rent-seeking and illegal housing (p. 111) to shed light on camps as sources of livelihoods and proliferation, by specifying, for instance, that the percentage of Palestinian camp dwellers who own their homes (82%) is higher than Lebanese nationals (68%). Besides, Chapter 5 seeks to approach the humanitarian framework, by mentioning how NGOs are captured by competing factions in the camps (p. 116). Marron, however, is not detailed in showing how ordinary people participate in these dynamics, risking, on the one hand, a new homogenisation of refugees - shaped by negative agency – and, on the other, a new homogenisation of humanitarians, who emerge as victims that are over-burdened with responsibilities, and finding “their path disrupted by amorphous forces” (p. 124).

The role of humanitarian agencies which stems from this chapter is slightly opaque: the attentive reader is left with several questions regarding what humanitarian projects the author precisely refers to until Chapter 6, when Marron finally outlines the political economy of refugee camps and NGOs. Drawing on Horkheimer’s theory of rackets, the author largely draws on her own ethnographic experience as a teacher in a vocational school in Shatila to inform her argument that the protectors in refugee camps are also the sources of violence (p. 126). The experiential anecdote serves to illustrate how factions, influential retired community members from different political constituencies, camp residents, and humanitarians participate in the “racket society”. Likewise, Marron mentions that public services are privatised by camp factional officials to appropriate aid from outside (i.e. waste removal service, electricity grid, etc.). Nonetheless, the author often mentions dynamics of welfare power-sharing, which can surely overlap with humanitarian interventions, without telling us how she frames such overlaps and, furthermore, is too quick to label all of the service providers in the camp as “humanitarian”.

While in the first instance the author depicts the humanitarian system as caught up in the racketeering dynamics as a mere victim, in Chapter 7, she nuances their action as a “moral hazard” (p. 149) in the crystallising refugee vulnerability and as facilitating the amplification of statelessness (p. 146). Racketeering against UNRWA projects is therefore seen as the only means by which camp dwellers can access resources (p. 163). In the effort to normalise refugee camps and dissuade public narratives from ossified victimhood, Marron concludes by asserting the humanitarian exacerbation of camp racketeering dynamics but, at the same time, denouncing how humanitarian failures have been “deflected away from camp society and back onto the Lebanese state and the international community” (p. 171). The author here argues that “humanitarian assistance is not a measure that ensures collective welfare”, but rather an individual entitlement for which racketeering is necessary in order to obtain “fair shares”. I find this the most significant and intriguing argument advanced, which, probably, should have been introduced and developed earlier in the book.

Throughout the chapters, the reader struggles to identify the voices of Marron’s interviewees and her own empirical evidence. Among her second source-based historical accounts around the formation of a camp habitus oppression, the refugee individual, however, is not well visibilised: refugees seem to be given agency through the negative morality of the humanitarian rackets and political neopatrimonialism, while being unable to turn camps into civil societies.
Moreover, to me, the choice of the title remains unclear, as the humanitarian discourse and practices are not given the largest room for analysis. By the same token, the geography of the camps in Lebanon is not clearly outlined, emerging as an abstract and therefore easily homogenisable space, while most of the accounts and the camp history provided actually regard Shatila exclusively. The book’s overall imprecise structure hinders a still needed in-depth discussion of humanitarianism in camp societies.

While revealing a specific disciplinary approach is not essential in my view, the author could have been more explicit in several sections in defining her positionality while in the field and the local politics of knowledge. The book presents a very large number of key themes which therefore remain hinted at rather than properly explored, scattering the reader’s attention. On the whole, this book is primarily a historical account for social sciences scholars and researchers interested in refugee-related issues, and humanitarian practitioners. I particularly suggest this book to those who engage with the history of Palestinians in the region, and the way camp politics intertwines with the domestic politics of “host societies”. In this regard, the author provides insights from relevant first hand experience and important secondary sources, which inform the current debates on politics, refugeeness, and humanitarian governance.

Estella Carpi is a Research Associate in the Migration Research Unit, Department of Geography, University College London, working on Southern-led responses to displacement from Syria in Lebanon, Turkey, and Jordan. She received her PhD in Social Anthropology from the University of Sydney (Australia) with a research project on social responses to conflict-induced displacement and humanitarian assistance provision in contemporary Lebanon. In the past, she also worked as a researcher in Egypt, Australia, and the United Arab Emirates, mostly focusing on humanitarian and welfare systems, forced migration, and identity politics.

Book Review - Avoiding the Terrorist Trap: Why Respect for Human Rights is the Key to Defeating Terrorism