Book Review - Emerging Powers and the World Trading System: The Past and Future of International Economic Law 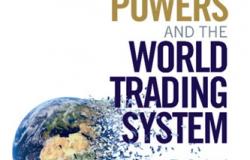 As one of the foremost American legal experts on trade law and policy, Gregory Shaffer has written a profoundly multidisciplinary book. He weaves insights and methods from law, political science, economics, and sociology into a single narrative broadly informed by the legal realist tradition. Shaffer seeks to understand “how it is that the United States now calls into question the trade law system it created, while emerging economies that long criticized that system for its bias in favour of US interests defend it” (Shaffer 2021, p. xiii).

To explain this reversal, he shows how emerging powers Brazil, India, and China built legal capacity at the WTO, and then used its mechanisms so effectively that they challenged American policies and practices. Their effectiveness contributed to an increasingly level playing field in terms of legal capabilities, with one of the foremost unintended consequences being rising nationalism, and a withdrawal from globalization on the part of the United States.

This is not a book about the United States. Nevertheless, the American withdrawal from liberal leadership looms large and dark in the background. Shaffer’s original insight may be termed a paradox of legal capacity, although he won’t name it until the final chapters. The paradox looks like this: the more legally capable Brazil, India, and China became, the less successful the United States (and the European Union) perceived themselves to be in an institutional order for trade that requires a legal defense of public policy.

In particular, the more legal capacity the emerging powers developed, the less the US and EU were able to leverage their own enormous capabilities for the purposes of opening markets and defending trade policy. Twenty-first century capitalism is an arms race not only in terms of developing the tools of finance and investment, but also in the sense that developing the rules by which the rest of us must operate creates significant advantages for the putative rule maker. The momentum of first-mover advantage and the legitimacy and prestige that come from crafting the rules are now openly contested by emerging powers, much to the consternation of the US and Europe.

The greatest weakness of this superb volume is its generic title, which does not do any service to its important thesis. The book ought to have been called ‘The Paradox of Trade Law at the End of the American Century,’ or something suitably evocative, because this study brilliantly describes the way in which the liberal international trading order, and the development of international economic law more generally, has been a victim of its own success.

In what turns out to be an excellent choice, Shaffer describes his research methods in a preface. One might imagine them to be lost there, or tacked on as an afterthought, but this is not the case. In the preface, the methods stand out as formative of what is to come. What’s more, Shaffer’s discussion is a very good example of a mixed methods approach to qualitative empirical analysis. Developed in a straightforward and detailed manner, it is a quietly masterful ideal of what mixed-methods research can be.

The theoretical chapters in Part I analyze the crossroads at which Anglo-American trade policy finds itself. Ought scholars and practitioners to fight for the flawed vision of a world without walls, to paraphrase former WTO Director General Mike Moore (Moore 2003)? Or should they embrace the new nation-centred order of sovereignty and narrow self-interest (Etzioni 2018)? Shaffer argues that the naïve hope for peaceful globalization through the spread of trade and democracy was always a red herring because the emerging powers’ “enmeshment in the transnational legal ordering of trade spurred the strengthening of state capacities” with numerous unforeseen consequences for American leadership, not least of which was the successful challenging of US trade remedy action at the WTO (Shaffer 2021, p. 51).

Shaffer gives us three in-depth and wide-ranging case studies that demonstrate the recursive dynamic of state and system transformation at work.  The WTO played a central role in state transformation in Brazil, India and China, and these states in turn transformed the environment of international trade law. The case studies are remarkable for their insights on the transformative effects of legal capacity on both emerging powers and the ecosystem in which they evolve. Shaffer chose a broad national focus in each study, ranging widely across three decades of history, but his finely tuned sensibility for the telling detail is always present. The fact that each of these chapters was co-authored by a colleague with extensive trade law (and linguistic) experience in the national context is also a significant strength.

Of course, one cannot help but read such a volume with rising anticipation for the last chapter, where Shaffer turns to the troubled place of the United States in the order it created. And here the paradox is presented in stark simplicity. “The US challenge to the legitimacy and efficacy of the international trade regime that it created, and the emerging powers’ defense of that regime, is a paradox that cuts across international relations theories” (Shaffer 2021, p. 298). Indeed. And of course, he is correct that when historians of the future analyze the US retreat from leadership, they must account for not only systemic factors, but also for the way that trade law evolved in the three decades after the Cold War.

To that end, the study provides “a legal explanation of the paradox,” without which any other explanation is incomplete because “legal capacity. . . is the medium through which structural economic change becomes expressed in institutional terms” (Shaffer 2021, p. 299). In Shaffer’s explanation, the blame for rising American nationalism and withdrawal from leadership lies not with emerging powers which embraced the liberal international order and continue to defend it, but with the US itself. Successive administrations and Congress relied on trade remedy measures to provide beleaguered domestic industry with relief from import competition, rather than undertaking the heavy lifting of creating better infrastructure, easier pathways into education, and a more robust social safety net to protect American citizens from the tyranny of the market.

Without comprehensive institutions of social protection, the US fell back on the blunt instruments of trade remedy, which were unable to protect citizens from the corrosive effects of sharpened global competition and soaring inequality. When even these unfit instruments were declared to be illegitimate in WTO dispute settlement, the stage was set for an anti-system authoritarian to throw out the rule book and challenge allies and rivals alike to a bare-knuckle brawl: winner takes the crown.

So much has been written already about the Trump Administration, but so little of it is truly insightful without a study such as this which dissects the way that the international legal order for trade facilitated the creation of new powers and simultaneously neutered the traditional policies of its principal architects. The trading system did what it was designed to do, and we weren’t prepared for the consequences.

Marc D. Froese is Director of the International Studies Program and Professor of Political Science at Burman University.

What the Pandemic can Teach us about Political Philosophy