Book Review: Global Inequality - A New Approach for the Age of Globalization 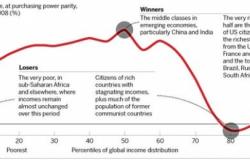 Some of my favourite development economists are nomads, people with feet in different regions, which seems to make them better able to identify interesting patterns and similarities/differences between countries. Ha-Joon Chang (Korea/UK), Dani Rodrik (Turkey/US) and now Branko Milanovic (Serbia/US), whose latest book Global Inequality: A New Approach for the Age of Globalization is a brilliant and thought-provoking essay stuffed with enough graphs to satisfy the numerati, anecdotes for the general reader and political insights for the policy wonks. Read it.

Milanovic is best known for his number crunching, especially his great graph of where the money from global growth went from 1988-2008 (see below). There’s no better way of showing the simultaneous rise of the emerging world (mainly Asian) middle class and the global plutocracy, accompanied by the hollowing out of the Western middle class and the neglect of the poorest.

But this book, even more than his previous ones, shows he is much more than a tweeter of top graphs: his level of political curiosity and insight is uncommon for an economist. He introduces politics much more centrally than other inequality gurus like Thomas Piketty or Angus Deaton, for example. In fact, I wish he’d given more time to the politics bit, and less to the economics. More on that later.

So what does he say? He sums up the book structure with a nice ‘executive infographic’. He shows the overall trajectory of global inequality, then decomposes it into what happens within and between countries. Like Piketty, Deaton or Chang, he takes the long historical view – centuries rather than decades, with erudite asides on inequality in the Roman Empire. He then pulls it together to discuss how inequality is likely to evolve in the 21st Century (the best section, IMO).

There is so much in here that doing it justice in a blog post is pretty much impossible, but the things that most struck me included:

The writing reminded me a lot of Piketty – like a very long dinner listening to a particularly erudite and interesting guest. Milanovic finishes with ‘ten short reflections on the future’, in which there are some great points, for example that given the mobility both of capital and high earners, future attempts to reduce inequality will have to be more like East Asian ‘predistribution’ of assets and education, than European tax and spend. But he then wandered down some eccentric or disappointing blind alleys, eg arguing that ‘the root cause of prostitution is income inequality’ or dismissing as hypocrites those concerned with planetary boundaries and limits to growth.

And then, suddenly and frustratingly, the book stopped. I wanted him to push himself harder to take the great political insights in chapter 4 to produce a real conclusion and advice on the most promising political pathways and opportunities for those wishing to tackle the scourge of inequality in this century. Any chance he had could spend an extra week in the Caribbean sometime and finish the job?

P.S. I’m not the only fan, here’s Martin Wolf’s rave review in the FT