How to Have Difficult Conversations 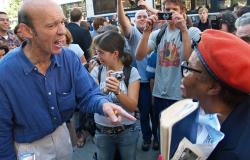 What if collective introspection made us into better campaigners?

Campaigners aren’t known for being contemplative. By definition they are trying to change something beyond themselves, and the stereotype of an outgoing extrovert with a megaphone exists because in part, it’s true. That kind of campaigning attracts admiration and often appears as the visible face of change. But what if collective introspection made us into better campaigners by improving our ability to listen and learn, especially from those we disagree with?

Who we interact with, and how, have became urgent concerns for campaigners, as opinions become more polarised around us. The challenge of reaching people we don’t agree with is especially important at a time when the far right is mainstreamed by the media and inciting hatred is a regular activity among presidents and other elected politicians. The challenge is both personal and political – what are the tools we need to disagree better?

For the past 15 years the Campaigning Forum (ECF) has functioned as a good example of the kind of space we need to promote long-term community building on the basis of cooperation and openness. Set up by Duane Raymond to encourage campaigners to share experiences as the digital sphere opened up (before social media!), ECF has expanded in reach and yet remained a close-knit community, providing an ecosystem of support that ranges from the technical to the emotional, where peers support not-knowing and where it is safe to ask for help.

At a recent ECF gathering Rosie Carter of HOPE Not Hate presented her experience of how we might approach an increasingly divisive political landscape. She was one of the organisers of the National Conversation on Immigration in the UK, which set out to answer the question, ‘just how divided are we, and how do we build bridges?’ Carter ‘walked the talk’ by travelling around the country to listen to people express their feelings and opinions. Although she found many people she didn’t agree with and had lots of difficult conversations, she also came away hopeful that a growing majority exists that is ‘open and tolerant.’ As this graphic shows there’s a lot of concern and ambivalence on immigration around which genuine conversations could be shaped, but campaigners will have to put more energy into engagement and understanding in order to be useful in this task. We have to listen to and respect views we might disagree with, and seek to find out why people hold the views they do without expecting that our own convictions will automatically sway them, so how can we learn to do this effectively?

After Rosie spoke I offered a peer session on ‘how to have difficult conversations,’ and the room filled with campaigners keen to share experiences. Drawing on sociocracy, a governance model made for power sharing and active listening, we sat in a circle, spoke in rounds, and I asked them to check in with themselves, identify bodily sensations and then express how they were feeling. The level of trust and safety that the group developed in minutes is not at all usual, and is a testament to the long-term trust that ECF builds for participants.

Google has spent millions of dollars proving that trust is the bedrock of constructive communication. They wanted to know why their best teams succeeded, and after not being able to prove any of their assumptions and going back to observe those teams, they found that what they had in common was not personality or intelligence or confidence or prior success, but something they called ‘psychological safety.’ That’s the kind of safety that’s built on feeling able to be real and vulnerable in a group, not competing with your peers, and being encouraged to learn from failure collectively.

How do we create this kind of trust and safety? In the session on difficult conversations I put my favourite quote from psychiatrist and Auschwitz survivor Viktor Frankl on the screen behind me: “Between stimulus and response there is a space,” he wrote, and “In that space is our power to choose our response. In our response lies our growth and our freedom.”

It’s a space that grows with reflection and requires slowing down our knee-jerk reactions into considered responses. We tend to think of this as an individual process. Aided by meditation, mindfulness, breathing and other practices, we seek to expand that space in ourselves and on our own. Yet because we are social animals that respond to cues in our context, seeking that space together is much more powerful.

It is in this space that we must locate our respect for the other - and if we can’t find it easily, to ask ourselves why. If we can also keep in mind what feels real and alive in us, we stand a better chance of responding in a way that will build on our commonalities rather than exacerbating our differences. It will also make it easier to accept, or at least understand, those differences, because we will be focusing on our common human needs -things like recognition, acceptance, respect and care.

The idea of using our feelings as a signpost to shared needs comes from ‘non-violent communication’ (or NVC), a method of conflict resolution created by mediator and activist Marshall Rosenberg. NVC is a deceptively simple and powerful approach which asks that you take responsibility for your own reactions - so someone doesn’t ‘make’ you angry; rather, you may feel anger when something is said. This is at odds with everything we’re taught in today’s ‘culture of blame.’

But owning your feelings is only the beginning: NVC then asks that you follow the feeling to the need that lies underneath. So if I feel frustrated with someone because in my view ‘they are not listening,’ I have to take a step back and wonder, what is it that I need in this situation? I would like to be heard, and that means I need understanding, or at least consideration. If I am then able to engage the person I’m frustrated with from that need and not from the feeling of frustration, my words and how I express them will be very different - and our human ability to mirror and respond in kind means that I am more likely to get a genuine response. We know it’s easy to escalate conflict, but it is also possible to build on empathy.

It’s surprisingly hard to work out one’s own needs, as opposed to what you ‘need others to do.’ A need is not a preference or an opinion, it’s the recognition of our deepest and most vulnerable desires. Crucially, our needs as human beings in this deeper sense are shared, so we can all recognize them. If we are able to speak while connected to our needs, others are more likely to respond to that commonality instead of reacting against our differences.

NVC makes a lot more sense in practice than in just reading about it, and it also takes a lot of practice to remember that there can be space between what happens and our reactions to events, a space in which we can grow and choose different responses. Campaigners and activists of every stripe need communities like ECF where there is space for mutuality and safety to explore how to disagree better. There’s no doubt that it is easier to begin to have difficult conversations with like-minded people.

Yet is also apparent that we have to be prepared to go beyond our own circles and learn how to use these tools to create trust as an integral part of our work. Creating safe spaces to have difficult conversations for ourselves will also make us better at creating wider conversations that reach across differences.

Marcela López Levy is a group therapist, sociologist and writer working at the intersection of power and psychology.