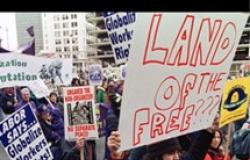 In the 1970s, the postwar international economic order, anchored by the International Monetary Fund and the World Bank, came under attack. Most notably, developing and under-developed countries in the Third World demanded a New International Economic Order (NIEO) in 1974. Not surprisingly, industrialized nations sought to lessen the effects of globalization on their own economies and steer talks of interdependence towards a route that allowed for continued domination of the international economy by the Global North. Meanwhile, corporations amassed political and economic powers that eclipsed that of some nation states. In the end, the industrialized nations and their corporate allies succeeded in beating back the demands of the Group of 77 (G-77) countries seeking a NIEO. Yet, as Paul Adler illustrates in his remarkable book, No Globalization Without Representation: U.S. Activists and World Inequality, debates over the NIEO represent only part of the story. In fact, globalization’s opponents, from locales spanning across the globe from the United States to Penang, Malaysia, embarked on a decades-long campaign to protect the world’s vulnerable citizens from corporate malfeasance in the 1970s and the neoliberalism of the World Trade Organization in the 1990s.

The first campaign undertaken by Adler’s public interest progressives involved the marketing of infant formula in under-developed nations. Most notably, the Infant Formula Action Coalition (INFACT) targeted the Nestlé corporation. INFACT’s Nestlé boycott received much attention. It forced Nestlé officials to reach out to the campaign’s leaders to defend the product and the company’s marketing practices. When this approach failed, Nestlé went on the attack, accusing the boycotters of seeking to further the aims of the NIEO and pressure the church-going participants to end their opposition to breast-milk substitutes. Not only did Nestlé’s efforts fail, but INFACT convinced Senator Ted Kennedy (D-MA) to hold hearings, which occurred in May 1978. Additionally, Kennedy contacted the World Health Organization (WHO) director-general Halfdan Mahler about creating a code of ethics to rein in Nestlé. Eventually, the U.N. International Children’s Fund (UNICEF) joined in these efforts as the two U.N. agencies prepared for a meeting in the fall of 1979, the Joint WHO-UNICEF Meeting on Infant and Young Child Feeding. Though concerned that the campaign moved from the grassroots to the halls of power inhabited by elites, where activists had less influence, and by the possibility that the negotiations might stall, INFACT’s leaders came to see it as an opportunity to reform international bodies, just as progressives had sought to do with domestic agencies in the United States.

In May 1981, 181 countries voted in favor of the International Code of Marketing of Breast-Milk Substitutes, leaving the United States as the only “no” vote. Though public interest groups had greatly strengthened the language of the code, the Carter administration had convinced the WHO to make it non-binding. Nonetheless, as Adler argues, activists remained determined, recognizing from the start that any code, binding or otherwise, would require the constant oversight of public interest groups to ensure enforcement. Beyond concrete victories, the infant formula campaign tested the relationship between activists from the Global North and South. As Adler has shown, in trying to explain why mothers of the Global South accepted the misinformation promoted in the advertisements for breast-milk substitutes, groups like INFACT unintentionally “conveyed the message that impoverished people could not make thoughtful decisions” (30). Thus, even as INFACT refuted the idea of the industrialized North as superior to the Global South, public interest progressives, mostly white and middle class, exhibited the same sort of paternalism as others in the North had previously.

In the 1980s, Adler’s fair globalizers turned to the debt crisis engulfing the Third World, especially Latin America, before setting their sights on the North American Free Trade Agreement (NAFTA) and the World Trade Organization (WTO). According to Adler, public interest progressives “saw NAFTA and the WTO as amplifying threats to the regulatory state” (82). Interestingly, Adler suggests that the turn to NAFTA meant that the “internationalist orientation of the 1970s and 1980s public interest campaigns dimmed” as attention turned to how global economics affected the United States. In turn, for many opponents, the Third World turned into an enemy rather than an ally. Moreover, whereas earlier public interest groups had sought to remake the global economy, NAFTA’s critics offered no alternatives. Instead, in the words of Adler, “the overwhelming focus fell on just saying ‘no’” (114). Yet, the Alliance for Responsible Trade (ART) retained its internationalist perspective, looking at the campaign as part of the long battle against neoliberal economics. ART refused to follow the path of simply rejecting NAFTA, advocating instead a partnership with Canadian and Mexican activists to develop a new blueprint. Conversely, the Citizens Trade Campaign (CTC), which included such heavyweights as Public Citizen, mainly wanted to defeat NAFTA, resulting in a focus on congressional lobbying. In many ways, as Adler notes, this split was representative of a historical divide between supposedly pragmatic public interest progressives and radicals.

Despite the efforts of the anti-NAFTA groups, NAFTA passed. According to Adler, after failing to defeat NAFTA, public interest progressives came to the realization that they had fewer friends in Washington to rely on, in terms of either federal employees or congresspersons. Consequently, they “started to break out of their silos and ally more deeply with unions and community groups” and other grassroots activists (147). The creation in 1995 of Global Trade Watch (GTW) points to this new direction. Lori Wallach, who had worked on anti-NAFTA and WTO campaigns under the auspices of Public Citizen’s Congress Watch, founded GTW, which was premised on the notion that congressional lobbying and respectable activism had failed, requiring a greater focus on the grassroots. Not surprisingly, as activists prepared to protest against the WTO in Seattle in 1999, differences arose between radicals and reformers. For instance, a two-month argument ensued over the appropriate slogan to use. While the radicals aimed to tear down the WTO, and thus suggested “No to WTO,” the reformists simply wanted to make changes to WTO policies, which led to them favoring “People for Fair Trade.” In the end, the two sides agreed on People for Fair Trade/No2WTO. A similar dynamic occurred in terms of the tactics, aims, and audiences of the disparate participants in the protest.

Throughout No Globalization Without Representation, Adler seamlessly weaves together the various forms of activism carried out by the fair globalizers. In doing so, he highlights the difficulties faced by public interest progressives, as evidenced by their growing reliance on grassroots activists in the 1990s and beyond in the face of the bipartisan consensus on neoliberalism. Simply put, the lesson of Adler’s book is that if progressives of the twenty-first century hope to fundamentally alter the status quo, whether in relation to the economy, climate change, or foreign policy, it will take more than just public interest groups. They need to confront powerbrokers in the halls of power and on the streets, in the United States and abroad.