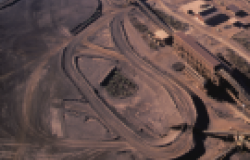 This post represents the second in a series of opinion pieces from the ongoing 2016 EITI Conference, in Lima, Peru being covered on the ground by the Global Leadership Initiative's team. Please check in regularly to keep up to date with the latest news and analysis from the summit. For previous posts please click here.

Accountability in resource wealth involves inclusiveness. Yet, in many countries, consultations rarely involve legislators. Instead, mining governance ranging from contract acquisition to fiscal allocation has oftentimes been under the tight grip of the executive.

Crucial information, then, becomes an exclusive right of some decision-makers, with the wider public left uninformed in decision-making. The opaque nature of the administrative structures is usually an obstacle in achieving transparency and accountability within the sector.

The blog, then, argues that increasing the involvement of the legislature and Supreme Audit Institutions (SAIs) is an important step to make the EITI an inclusive process.

Parliaments play a very crucial role in governing the oil, gas and mining sectors. Legislators are mandated to create laws; they also have the power to approve national budgets and monitor the everyday management of domestic revenues from the extractive industries.

Put simply, parliaments are responsible for law-making to support the sustainable management of resources. They serve as watchdogs in the proper utilisation of government revenues. Perhaps most crucially, parliaments embody the citizens. They represent the interest of the general public who voted them to debate and legislate important policies to govern resources on the behalf of the society at large.

However, natural resource governance has usually excluded parliamentarians. Apart from enacting an EITI Law, parliaments have been typically marginalized in the crafting of social contracts between the state and its citizens.

Strengthening Parliaments through the EITI

In 2013, EITI revised its standards with EITI standard 5 (1) putting in place the requirements for the appointment of an independent administrator to carry out audits of companies and government entities participating in EITI implementation processes.

The UN passed resolution 66/ 209, aimed at “promoting and fostering the efficiency, accountability, effectiveness and transparency of public administration by strengthening Supreme Audit Institutions”. Above all, the resolution encourages governments to actively pursue independent and capable institutions to strengthen various systems of public accounting.

In addition to a clearer mandate for supreme audit institutions, the EITI seeks to enhance the capacity of parliaments to effectively monitor and implement oversight in the management of natural resources. For example, the EITI supports reform initiatives in Congo, Brazzaville and Australia to compel ministries and companies to publish financial reports in websites and the wider media outlets.

Some EITI partners also work with parliamentarians in utilizing existing channels to demand accountability, for example through house committees and special legislative commissions, with the purpose of effectively engaging in multi-sectoral governance processes.

Parliaments lack the technical capabilities to effectively interrogate the complex policy issues surrounding resource extraction. This, then, requires policy issues to be better understood by legislators whose role is usually to set out the broader governance framework to guide extractive activities.

Furthermore, parliaments are equipped to open up the opaque and highly secretive deals and contracts in the sector. However, political will is important in doing this, given the controversial nature of these complex issues.

At a time when EITI is at the crossroads, parliamentary engagement is more important than ever in fostering transparency and accountability in the extractive sector. Their participation in the governance process is crucial, but further reforms in the EITI governance framework might be needed to make this involvement more meaningful.

Winfred Syombua is a Policy Analyst for the Global Leadership Initiative (GLI). She has demonstrable experience in working with legislative bodies on Human Rights and Governance.