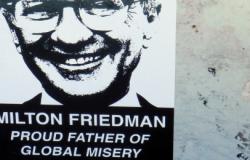 Dan Banik and Jason Miklian show how and why the private sector's role in sustainable development has become a $2 trillion shadow industry, and ask what this change means for the future of development and even the liberal international order itself.

Milton Friedman would be livid. The kingly economist and Nobel laureate spun his mantra that “the business of business is business” at every available opportunity throughout the 1970s and 1980s. Friedman believed passionately that firms should steer clear of trying to improve society, leaving this weighty responsibility to governments and NGOs. The cornerstone member of Ronald Reagan’s Economic Policy Advisory Board, Friedman’s free-market fundamentalism influenced corporate activity for years as firms worked in impoverished parts of the world alongside – but almost never with – do-gooder aid and development actors.

But we’ve seen a sea change in business attitudes over the last 25 years, driven by several interconnected trends. First, companies have established deeper footprints in poor and fragile countries, both through their own expansion and by acquiring local competitors. Second, activist attention to corporate misdeeds in such places is much higher, kicked off by concerns over ‘blood diamonds’ and other ill-gotten minerals in the 1990s through to the scrutiny of global sweatshop clothing supply chains today. Third, a new generation of activist CEOs and investors have come to the fore, embracing the belief that businesses should be not just profiteers but also positive social actors.

Taken together, these profit and reputational drivers have led the private sector to make a sustained collective effort for global development for the first time. The international community is funneling its enthusiasm through the Sustainable Development Goals (SDG), unanimously adopted by world leaders at the United Nations in September 2015. The 17 SDGs – grouped under overarching themes of people, planet, dignity, prosperity, justice and partnership –aspire to reduce inequality and increase economic growth while supporting sustainable energy and attempting to build the socio-economic foundations of peace everywhere in the world, all through their unprecedented effort for genuine engagement from both the Global North and South.

Today, over $2 trillion in business investment is benchmarked to the SDGs, all Fortune 500 firms have Corporate Social Responsibility departments, and over half of them directly engage with SDG goals as a part of their social community policy. Business engagement in development through the SDGs is thus of a scale unparalleled in human history, and this immensely powerful sector has already begun to fundamentally shift how global development is done.

Still, critics abound. The SDGs have been roundly condemned for their unrealistic ambitions and lack of focus. The Economist termed them “Stupid Development Goals”, and the economist William Easterly rebranded them as “Senseless, Dreamy, Garbled.” And with the Trump administration backing out of multilateral initiatives like the Paris agreement on climate change and the Extractive Industries Transparency Initiative and making drastic cuts to the USA’s foreign aid budget, momentum for poverty reduction and social development through collective initiatives like the SDGs is fading in their most important stronghold.

Undeterred, SDG proponents in both the business and practitioner communities make two main arguments to argue for ever greater private sector involvement in global development, across sectors and by both Global North and South firms.

First, the “business case” perspective showcases how SDG compliance can create market opportunities and grow profits through adherence to sustainability, and that economic growth will lead to better societies. For example, the non-profit Business and Sustainable Development Commission claims that achieving the SDGs will create 380 million new jobs, and that the fulfillment of 4 key SDG goals alone – food and agriculture, cities, energy and materials, and health and well-being – will create $12 trillion in business revenue by 2030. Advancing the SDGs, the idea goes, not only cultivates goodwill toward businesses and large investors such as pension funds, but generates sound returns.

Unilever is one of the large multinationals that has bought in to this belief. Driven by activist CEO Paul Polman, Unilever has made the case that compliance with the SDGs reduces the company’s risks associated with climate change and conflict, and has reworked the global consumer products conglomerate’s entire supply chain in anticipation of what he calls “the greatest economic opportunity of our lifetime.”

Second, the “moral case” perspective argues that businesses should prioritize the SDGs in their quest to be more responsible global citizens. Here, the idea is that businesses can work to achieve the SDGs by delivering an expanded form of corporate social responsibility that, rejecting Friedman, rests on the moral duty of business to do good. Thus, firms are obligated to demonstrate greater respect for issues like the protection of human rights and reducing corruption, which in turn will influence governments to make more sustainable development choices.

For example, India’s Tata Group has prioritized the eradication of poverty, noting that “by producing affordable goods and services for the poor”, businesses can create jobs as well as view the poor as “producers and consumers of products, rather than as mere beneficiaries of charity”. As many governments respond to business interests and concerns, the private sector has the moral duty to engage in public dialogue aimed at lobbying for policy change that will benefit the poorest and most vulnerable sections of society.

But a key question lingers: What should businesses actually do to help deliver the SDGs? Despite 17 Goals, their accompanying 169 targets, and their nearly 500 indicators by which to measure success, there is no concrete guidance on how businesses should individually participate. Moreover, the SDGs themselves are idealistic but intentionally unrealistic aspirations that are bound to fail their targets in many places. Further, few if any firms are likely to sacrifice profit for SDG pursuits, and SDGs themselves might be undermined if every private sector social initiative is also marketed as SDG-promoting.

The current method of simply letting companies pick and choose whichever SDGs suit their corporate aims – perhaps a designed effort by the international community to coax firms into engaging in the first place – has muddied our ability to direct businesses capacity to those activities that are the most effective. And self-reporting of business compliance with and impact of SDG-related programs and pursuits reinforces the critique that the impact of business efforts in the SDGs are minimal at best, and at worst constitute ‘blue-washing’ as companies without oversight use the United Nations’ good offices and branding to give the impression that firms are responsible actors. Others argue that society should shape business rather than business shaping society, and that the global action should be focused on “localizing” rather than “globalizing”.

If the private sector is to make a meaningful contribution to global development beyond what it would do anyway in fragile parts of the world (including reducing risk, growing markets, and maintaining good/improving community relations for the purposes of stability), we must better define the role for business in the SDGs. The SDG agenda is replete with references to “we”, without a clear division of labor between various stakeholders and identification of duty-bearers who can be held to account.

Operationalizing the SDGs requires a clearer understanding of the inter-connected yet distinct role of national governments, international agencies and businesses. With Friedman’s belief that firms should stay out of social improvement altogether feeling hopelessly dated, it seems time to establish a clear line between the roles and responsibilities of development actors and the private sector. This is particularly urgent in low-income countries and conflict-prone “fragile states”, which are confronted with the dilemmas and potential pitfalls associated with coordinating the activities of numerous competing actors.

Those researching the role of the liberal international order are looking extensively at America’s step back on the global stage and what the rise of a presumably illiberal China means in its place, and rightly so. However, states are not the only actors looking to reshape this order. And companies engaged in the SDGs are talking a good game about their willingness to promote liberal values in places lacking them.

But are we ready to let business take over the roles and the responsibilities of the state in international development? If business is going to be an integral part of the SDGs, governments must first identify, articulate, coordinate and implement development programs aligned with their national interest, and make them sufficiently attractive for both domestic and international firms. This also means incorporating public administration entities, which are typically bypassed in policy formulation.

Leading governments must also develop the capacity to isolate activities aimed at achieving the SDGs from mere profit-making initiatives that can thwart social and economic development, especially as it’s questionable whether governments of vulnerable nations will be able to say no to powerful business interests when they come calling with enticing offers of help.

Without such guidance, the SDGs – despite the billions of dollars spent and high-profile political support – might simply be remembered as a hopeless idealism, an epic waste of money, or worst of all another painful lesson in multilateral initiatives exacerbating the very things they are supposed to help. After all, when they are everyone’s business, achieving the SDGs simply becomes nobody’s responsibility.

The Many in One: A Review of Amartya Sen’s “Home in the World: A Memoir”