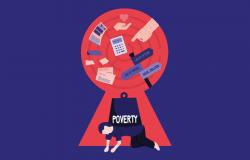 In 1942, William Beveridge issued an epoch-defining report that established a model for welfare states in the post-war era. He recognized that the old social protection system had broken down and that it was “time for revolution, not for patching.” The challenge, Beveridge said, was to slay five giants: disease, idleness, ignorance, squalor, and want.

Today, it is the post-1945 income distribution system that has broken down irretrievably, threatening economic failure and jeopardizing what Klaus Schwab calls “Globalization 4.0.” Today we must fight eight new giants. To do so, we urgently need a twenty-first-century income distribution system in which a basic income plays a central role. Such a system might not slay today’s eight giants, but it would significantly weaken them.

The first giant is inequality – the huge growth in income and wealth disparities within countries that goes well beyond what is captured by measures such as the Gini coefficient. An increasing share of total income is being captured as rent by owners of physical, financial, and so-called intellectual property. Meanwhile, real wages have stagnated or fallen, and ever more people are falling through widening holes in the social safety net. Traditional redistributive tools such as direct taxes, collective bargaining, and labor regulations cannot reverse these structural shifts, however much those on the left might wish.

What is needed is a new income distribution system that restores the market economy rather than distorting it. By recycling rents currently taken by the plutocracy and elite to everybody, a basic income paid as a common dividend would be the anchor of a reformed system. Contrary to what some critics assert, a basic income would not be regressive. Paid equally and quasi-universally from rentier income, it would necessarily be progressive.

The second threat is economic insecurity. The welfare state was supposed to insure workers against contingent risks and shocks. But it is failing because of reduced social insurance coverage, flexible labor markets, and widespread technological disruption, among other causes. Moreover, today’s economic insecurity is characterized by uncertainty about the future rather than known risks. People feel threatened by “unknown unknowns” that, by definition, cannot be insured against. In an open, globalized economy, only a basic income can guarantee basic security.

The next giant, and closely related to the first two, is debt. Millions are living on the financial edge, with unpaid rents, utility bills, and high-cost credit cards. A significant rise in interest rates or an economic downturn could trigger an avalanche of distress. True, a basic income would not solve the debt problem, but pilot projects show that when people know a regular amount is coming in, they are likelier to pay down debts and gain greater control of their finances.

Fourth, and again related, is stress. This is a global pandemic, with an increasing number of people suffering from depression, mental illness, suicidal tendencies, and physical ailments linked to job pressures, insecurity, inequality, and feelings of inadequacy among many people who perceive themselves to be just “licking at the window” of consumerism. A basic income would not cure the stress pandemic, but it would reduce its intensity and prevalence.

The fifth giant is the ever-growing precariat – the millions of people who face a bits-and-pieces life of unstable, often unpaid labor, having to rely on money wages alone. They are supplicants, without what sociologists call “agency,” who depend on discretionary favors from bureaucrats, family members, and occasional employers. A basic income would offer much-needed respite to these people and make them feel less like beggars.

Robots are the sixth danger. I am skeptical about the alarming predictions of tech gurus and economists who believe that artificial intelligence and technological wizardry will soon lead to mass displacement of humans. Still, the ongoing tech revolution is undoubtedly disruptive and, although it may accelerate growth, it will continue to intensify inequalities. A basic income would help to share the gains more widely.

The threat of extinction from global warming and the ecological catastrophe is the seventh giant that must be confronted, and it may prove to be the most decisive in mobilizing support for a basic income. The threat must be combated with new and increased eco-taxes or levies. Returning the proceeds of “green” levies to people as equal common dividends – a form of basic income – would turn unpopular regressive measures into progressive ones. This is already happening in Canada, led by a successful initiative in British Columbia. What’s more, our research shows that a basic income would tilt economic activity toward personal services, community, and voluntary work, reducing the yawning “care deficit” in aging societies.

The eighth giant blocking the way to a flourishing, inclusive economic system is populism, which in some cases is fast becoming neo-fascism. Support for populists also has grown dramatically in Europe, no doubt owing to chronic economic inequality, insecurity, debt, stress, and anger. A basic income would make many more people feel like valued citizens with a stake in democracy.

I have worked on basic income policies for three decades, and I have been involved in piloting variants on four continents. As the economic, political, and environmental threats to our future multiply, rolling out a universal individual basic income is more important than ever.

Global–Regional Realignments in Trade, Finance and Development: Introduction to the Special Issue