Trump Wants to Maintain US Empire But Without the Alliances 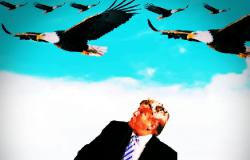 During the U.S. invasion of Iraq, even more reluctant scholars on both ends of the political spectrum were finally forced to acknowledge that the United States is an empire and that it has been acting as one since the end of World War II. Of course, there was a natural disagreement among them as to whether the U.S. was a different sort of an empire from those that had dominated world politics in the past, with conservative thinkers like Niall Ferguson arguing that the U.S is essentially a benign empire.

Yet, as Daniel Immerwahr, associate professor of history at Northwestern University, reminds us in his pathbreaking book, How to Hide an Empire, U.S. imperialism was alive and kicking throughout the 19th century. In fact, the United States was an empire from the very beginning of the founding of the nation, although this fact has never been part of standard educational narratives about U.S. history and foreign policy.

Meanwhile Donald Trump’s fetishization of the military is a reflection of the way imperial logic has been deeply ingrained into the mindset of most Americans, although Trump’s own vision, as Immerwahr argues, is one of a “fortress America” and of a U.S. foreign policy that relies less on alliances and on the presence of military bases across the globe.

In this interview, Immerwahr talks more about the contemporary shape of U.S. empire and how it has shifted under Trump.

C.J. Polychroniou: Over the last few decades, there has been an ongoing debate among some scholars as to whether the United States became an empire following the end of World War II. In your recently published book, titled How to Hide an Empire, you argue that the U.S. has always been an empire. Can you elaborate a bit on this claim?

Daniel Immerwahr: From the first day the United States received its independence from Great Britain, the country was, in spite of its name, not a union of states. It was an amalgam of states and territories. And for most of its history, the United States has had overseas territories. Add to that the hundreds of foreign military bases currently under U.S. control. There are lots of things you might mean by empire — you might refer to a commercial empire, an empire of pop culture. But by the strictly territorial definition, which understands empire to mean territories and outposts, the United States has unambiguously been an empire and remains one today.

This isn’t just a minor fact. The overseas territories have contained millions (as they do today). In 1940, one in eight people who lived in the United States lived not in the states but in the territories. More people in the country were colonized than were Black, more people in the country were colonized than were immigrants. That’s how big the empire was. It’s not just that the overseas parts of the country have accounted for a lot of its land and population. They’ve also been important to its past. The overseas territory of the United States has consistently been on the front lines of its history.

How do we explain the fact that the reality of the U.S. as an empire is largely absent from public consciousness?

Many people are comfortable calling the United States an “empire” in reference to its policies. But, even still, a lot of people don’t know very much about its actual overseas territory. I was raised and schooled in Pennsylvania — at no point in my education did I ever see a map of the United States that had Puerto Rico on it. And the history of the country as I learned it was the history of the mainland, the contiguous part. So, I think it’s not a great surprise that most mainlanders have been largely unaware of these other parts of their country.

That lack of awareness has mattered a great deal. It’s allowed the territories to serve in times of war as sacrifice zones. In times of peace, it’s allowed them to serve as laboratories, where lawyers, doctors, architects and other professionals can try out ideas with little oversight or fear of consequences.

The U.S. has been at wars continuously since 9/11. Is this the outcome of imperial logic?

It’s not just since 9/11. In nearly every year since World War II, the United States has deployed its armed forces abroad for actual or potential conflicts, overall more than 211 times in at least 67 separate countries, according to a 2016 Congressional Research Service Report. The explanation isn’t that the United States is a normal country that happens to get into wars because it’s plucky. Rather, the United States is unique in that it maintains hundreds of foreign bases around the planet (Scholar David Vine, author of Base Nation: How U.S. Military Bases Abroad Harm America and the World, counts 800 bases, including secret ones). There’s no other country that even approaches that footprint.

And that’s mattered a lot. In my book, I show just how much global history has turned around those bases. A surprising number of cultural artifacts, from the Beatles to the peace symbol to Godzilla, can trace their origins to the U.S. basing system. Those bases have been major political issues in other countries — two Japanese prime ministers have been brought down by anti-basing politics.

By all accounts, Donald Trump seems to believe that the U.S. empire is crumbling. Does America now look like Rome before the fall of the Republic?

Trump is right to see a decline of U.S. power. What’s odd is that he’s both upset about it and doing a lot to hasten it. So, he often speaks of the need to cancel longstanding international agreements and shutter bases. His idea of raiding the military’s construction budget to build his wall was a vivid expression of his desire to contract the country.

Do you see a link between Trump’s increases for military spending and potential concerns on his behalf over the decline of the U.S. as an empire?

Trump fetishizes military power, but many aspects of the military make him uncomfortable, including all of the mutual defense pacts. My sense is that he wants power in the world without presence in it. His vision is of a country that is confined to the borders of the contiguous United States, a wall built high around it, and bristling with fortress defenses. That’s very different from the typical pattern of U.S. power, which involves superintending a complicated alliance system, peppering the planet with bases, and fighting via coalitions.

We’re at an interesting moment for the United States’ territorial empire, partly because Trump is throwing so much of it into crisis. We now have a president who is talking openly about closing bases and seeking to halt federal funding for the largest remaining U.S. colony, Puerto Rico. All of that is pushing the overseas parts of the country into the limelight. An empire that for mainlanders has long been hidden is now hard to ignore.

C.J. Polychroniou is a political economist/political scientist who has taught and worked in universities and research centers in Europe and the United States. His main research interests are in European economic integration, globalization, the political economy of the United States and the deconstruction of neoliberalism’s politico-economic project. He is a regular contributor to Truthout as well as a member of Truthout’s Public Intellectual Project. He has published several books and his articles have appeared in a variety of journals, magazines, newspapers and popular news websites. Many of his publications have been translated into several foreign languages, including Croatian, French, Greek, Italian, Portuguese, Spanish and Turkish. He is the author of Optimism Over Despair: Noam Chomsky On Capitalism, Empire, and Social Change, an anthology of interviews with Chomsky originally published at Truthoutand collected by Haymarket Books.

This first appeared on Truthout and was reposted with permission.

The End of the Sino-Russian “Alternative”? How Quickly Soft Power Can Recede