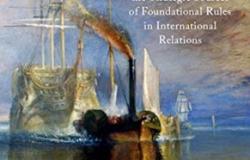 Efforts by states to establish an international order are often seen as a means to foster cooperation for a more peaceful and prosperous world. ‘After World War II, America had the wisdom to shape institutions to keep the peace and support human progress,’ said President Barack Obama in a speech in 2014. Underlying such remarks is the assumption that the world order that was created through the establishment of NATO and the Bretton Woods system was meant to enhance global security and economic prosperity in a benevolent structure.

Kyle M. Lascurettes in his book ‘Orders of Exclusion’ challenges this conception and argues that the contemporary order fits a long trajectory in world history in which powerful states created systems not primarily to enhance cooperation, but to exclude certain actors (pp. 3-4). His fascinating theory puts international orders like the state system of Westphalia, the post-Napoleonic Concert of Europe, or the modern Bretton Woods system in a different light. The pattern Lascurettes observes throughout history is that dominant states whose future security or primacy on the world stage is threatened, enact world orders to exclude and weaken their enemies (p. 35). Orders, as he defines them, are systems with actors who regularly observe common rules, both in terms of behaviour and membership of the group (p. 6).

Lascurettes provides a set of case studies of such orders between 1648 and today. He begins with an examination of the Peace of Westphalia of 1648, which followed the Thirty Years War and recognised for the first time the sovereignty of the nation state. Sweden and France, who were the main winners of the war, pushed for the creation of a system of independent actors, he writes. The recognition of nation states as primary actors in international politics allowed the victors to suppress claims by the Catholic church and the Habsburg Empire – their two main enemies – for universal authority above individual states. The creation of the order thus was a means to counter and curtail opponents (pp. 59-61)

In 1713, Great Britain won the War of the Spanish Succession that had erupted after France and Spain planned to merge their kingdoms under one crown. Through the Treaty of Utrecht, Great Britain introduced a set of rules that abolished the automatic recognition of territorial claims by dynasties and made the maintenance of the balance of power in Europe a legitimate foreign policy objective. The new system, Lascurettes highlights, allowed the victor to let the balance of power override dynastic claims, preventing the creation of a great power block (p. 74).

In 1918, following its victory in World War I, the United States under President Thomas Woodrow Wilson championed a new world order in which inter-state war was supposed to be outlawed and conflicts be settled peacefully. While the general view is that the export of democratic values was an important motivation for Wilson, Lascurettes argues that the US was primarily driven by the desire to exclude its enemies. Although Germany was defeated and the fear of absolutism was therefore declining, the US saw Bolshevism as a new threat that needed to be contained: since the rise of revolutionary socialism after the Russian Revolution of 1917 posed an ideological threat that could not be defeated militarily, the US sought to enact an order that was meant to weaken it (p. 147).

Lascurettes points out, for example, that the right to self-determination, a corner stone of Wilson’s vision, was intended to allow the creation of states like Poland, Czechoslovakia, and Yugoslavia to minimise Russian influence, rather than to grant independence to all countries or European colonies. Moreover, Wilson’s insistence on democracy and orderly power transitions as criteria for membership of the League of Nations points to a strategy of exclusion of certain actors that threatened American dominance – that is, primarily Russia (pp. 153-157).

Finally, he shows that the origins of today’s order are equally excluding: concerns about fascism led the victorious powers after World War II to build a system based on ideas such as open economies, social welfare, and individual rights – criteria that excluded countries like fascist Germany with its mercantilist trade policy and group-centred ideology (pp. 177-178).

From such a perspective, the evolution of today’s international system is not much different from earlier orders of exclusion. As the current order is increasingly threatened by China as a new great power, Lascurettes’ exclusion theory has several practical foreign policy implications: a strategy of incorporating China as much as possible into the existing system is unlikely to happen, he writes. Rather, if history is any guide, US leaders are more likely to focus on building an order that excludes, rather than assimilates their opponent (p. 237).

Lascurettes’ findings are based on nine global power transitions between 1648 and 1989 (overview on p. 231). For every case study, he considers three alternative explanations for the establishment of world orders by powerful states: first, the need to strengthen their dominant position by assimilating smaller states (‘binding’); second, the desire to spread their own beliefs, ideologies, or institutions (‘exporting’); and third, the wish to prevent the repetition of a major problem or crisis from the past (‘learning’) (p. 11). Lascurettes concludes, however, that none of these alternatives are able to explain the emergence of world orders as coherently and consistently over centuries as exclusion theory can.

From a theoretical perspective, ‘Orders of Exclusion’ provides a piece of theory to bridge the gap in International Relations between realism, which explains state behaviour as a self-serving striving for security, and liberal explanations that stress the ability of states to cooperate. Lascurettes’ interpretation of history shows that great powers are willing to cooperate indeed, but that they do so to exclude their rivals, rather than out of altruism (p. 234).

As the current world order is increasingly questioned, Lascurettes provides a thought-provoking long-term view of international history that should stimulate theorists and practitioners in their work on a system for the future. And while the accounts of history are insightful, the real strength of the book is their re-interpretation and the long-term patterns that they illustrate. ‘Orders of Exclusion’ is a fascinating study of history, diplomatic strategy, and international relations theory.

Benjamin Duerr is an international lawyer and political scientist. He works as an adviser for international organisations and writes about foreign policy, history, and war and peace.

Tools of Convenience: Western led Economic Sanctions and an Emerging Arc of Grievance