Media Centre – G7 Ise Shima Summit. As the seven leaders of the world’s most advanced economies meet on Japanese soil, the unblinking eye of the world’s media follows fervently as Japan leads the discussion on a range of high-level, high-octane global issues. At the same time, this global platform also provides an opportunity for Japan to capture the spotlight as host and redirect it towards future events. Apparently, the intention is to sow the seeds for their success and once again turn the world’s attention to one of East Asia’s superpowers.

Within the International Media Centre (IMC), a range of exhibitions ardently showcase Japanese culture and tradition while also plugging events that will take place in Japan in the not so distant future. Among these are the Rugby World Cup in 2019 and the

the following year. The exhibits use displays that advertise these events and generate potential spectators for them, no doubt hoping to make them stand out and promote Japan as a place of interest and curiosity.

As Shinzō Abe openly stated, the reasoning behind Ise-Shima as a location for the G7 Summit was borne from his desire to improve the world’s awareness of the area and to improve both its cultural and economic appeal. This self-promotion is not limited to the location, the summit itself seems to be a manifestation of the country’s desire to unashamedly self-advertise and keep the world’s gaze firmly fixed upon Japan. They are especially conscious of diverting attention away from its neighbour China, who despite not being a member of the G7, represents a dominant and immovable force within Asia (China will also host the G20 in September and thus attempt to steal the limelight). 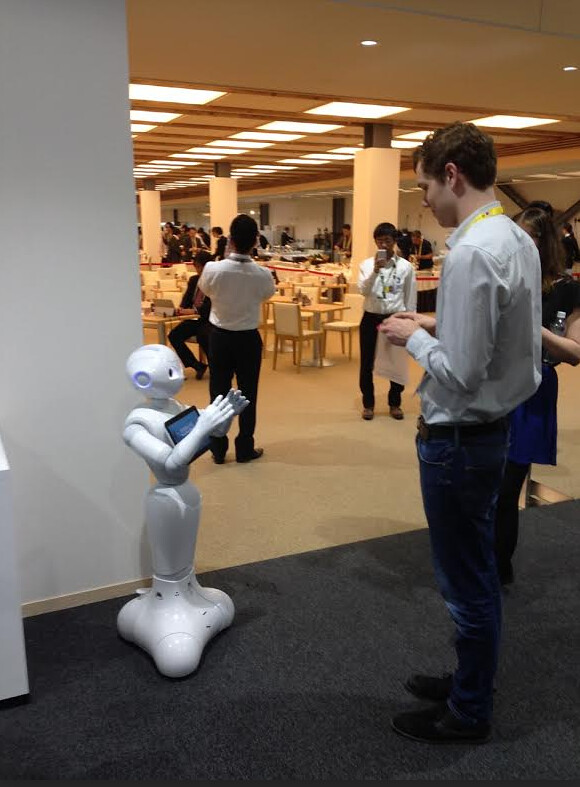 Back within the IMC, Japan’s culture and technological prowess has been significantly plugged through super high-tech displays of driverless cars. Courtesy of Robot Taxi, inc., these cars are fitted with contactless technology which allows customers to use their smartphone software to order, ride and pay for a car journey without the need for human interaction. Toyota’s fuel cell vehicle ‘Mirai’ is also on display, which aims at optimising fuel consumption through its zero-emissions status. The cars are prototypes for the Tokyo 2020 Olympic and Paralympic Games, which promise to not only be a showcase of sporting greatness but of technological superiority. These next generation vehicles and personal mobility devices are intrinsically linked to the events in order to optimise their future exposure. The G7 sets the scene for this connection to take place.

Another exhibition of Japan’s technological brilliance comes in the form of the LabDroid ‘Maholo’, from the ancient Japanese word meaning ‘paradise’, which is used within laboratories to enrich and innovate scientific experiments. The Japanese tech industry’s conception of ‘paradise’ refers to the fact that such technology can eliminate human action within practical areas of experimentation, thus removing human error and producing higher levels of accuracy. It was explained that tomorrow’s scientist will be able to focus on the theory and methodology of a scientific experiment, rather than the handling of chemicals, mixing of compounds and creation of drugs. Scientists will no longer be ‘pipette slaves’, but innovators and creators. Maholo is representative not only of Japan’s innovation within the Brave New World of technological advancement, but also Japan’s ability to commodify and reap the financial advantages of being at the forefront of human-substituting technology. Few occasions could serve as a better World Fair for Japan to promote its latest products than a gathering of the world’s most economically and technologically developed countries. Here, the products are advertised to an international market, increasing their export potential as future goods for Western countries.

The stark contrast between the kimono-attired hosts and the sleek white metal veneers of the cars and robots emphasises the strength of Japan’s national identity and its desire to lead a world that is expanding infinitely deeper into the realms of technology and digital interfaces. In this way the summit represents the ebb and flow of attention that world-leading countries try to master in order to remain - world-leading - and the opportunities that Japan has taken to retain its pivotal position in popular interest.

However, there are downsides to using the G7 to advertise national interest versus global summitry. In particular, by focusing on Japanese identity and its technical prowess in the world, it threatens to downplay the importance of the summit itself as well as sideline the collective global problems the summit is actually meant to resolve. The fear, like with any advertisement campaign, is that the consumers will start to believe the claims about what the product claims to do rather than what the product actually does. And when this happens, public opinion can become more concerned with political flash and less concerned with political substance.