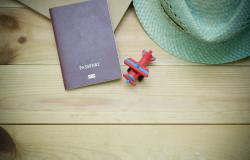 Emilian Kavalski and Nicholas Ross Smith, from the University of Nottingham Ningbo China, take the proposed introduction of immunity passports to remind of the hundred-year-old relationship between pandemics and travel documents.

As the proverb goes: “there is nothing new under the sun”. And the responses to the current COVID-19 pandemic seem to confirm the timeless wisdom of this statement. From the undermining of democratic processes, the growing racism (initially, in the West, against Chinese – and people of Asian background – and now, in China, against foreigners), the weakening of international collaboration as demonstrated by the global scramble for vital medical supplies, to the enveloping politics of fear. COVID-19 follows in the well-trodden footsteps of millennia of human responses to pandemics.

To put it simply, the international community is in crisis and how to deal with the COVID-19 pandemic to re-start global interaction is a hot topic at the moment. Of the many potential global measures for mitigating the threat of COVID-19 that are being discussed, one of the more prominent is the introduction of “immunity passports.”

The concept of an immunity passport for COVID-19 is quite straightforward. It is a form of documentation confirming that a person is immune to COVID-19. The idea is that through the mass testing of populations, a database of immune people could be generated which would allow the gradual re-opening of societies and borders. Such a measure is touted as a way of kickstarting economic activity again, particularly as the potential economic toll of COVID-19 is unprecedented in recent human history.

The idea of immunity passports is not a new concept, however. Before the First World War, essentially one did not need a passport to travel. If a person had the means to pay for their fare and the ability to procure work and accommodation, they could travel (largely) unhindered across national borders.

It was only the start of the war that led European countries to begin closely monitoring their borders for security reasons. At the end of the war, the intention of the signatories of the 1919 Treaty of Versailles, however, was a return to the pre-war “freedom of communications and of transit”. The preamble to the resolution adopted at the 1920 Paris Conference on Passports and Customs Formalities and Through Tickets suggested that passports were only a temporary measure until “the pre-war conditions [are] gradually re-established”.

But, the onset of the Spanish Flu pandemic put a spanner in the works. The death toll, which surpassed that of the war itself, revealed the vulnerability of modern states linked by globalization to pandemics. Thus, in the wake of the Paris Conference, the concept of passports mutated to also regulate the movement of people owing to “considerations of health or national security”.

Furthermore, the demands of post-war reconstruction and recovery put a premium on healthy populations. It was decided that one of the best ways to ensure the wellbeing of the citizenry was through regulating who could enter the territory of the state and who could not.

Thus, the temporary measure of monitoring borders first introduced during World War I became a permanent feature of international relations after the Spanish Flu pandemic. National borders gradually became, among other things, membranes ensuring the immunity of populations against exposure to foreign carriers.

But, for many, borders alone were deemed insufficient in protecting against the health risks brought about by the movement of people. By the mid-1920s governments begun to demand compulsory medical examinations for all those who would like to visit their countries. It was even proposed that passports should include a “general medical certificate” page. The idea was that every traveller would undergo a thorough medical exam before embarking on a cross-border trip. Thus, when they arrived at their destination, travellers would be able to prove that they were in good health and not contagious. Some delegates even insisted that passports should include “vaccination certificates” providing the full immunization record of their owners.

The idea of a medical certificate page on the passport, however, was quickly scuppered by the technological limitations of the time. There was the question of whether one page would suffice for frequent travellers and the possibility one could get infected en route was raised, not to mention the challenge of governing this consistently on a global level.

There were also ethical concerns about the infringement on privacy that such a certificate would entail. As one delegate at the 1926 Passport Conference in Geneva observed, many travellers “objected to having their finger-prints taken,” let alone subject themselves to an intrusive medical exam. The Hungarian representative at the meeting, Ladislas de Gömöry-Laiml, was so incensed by the discriminatory nature of these propositions that he exclaimed in exasperation: “What is a passport and what are its uses?”

Fast-forward one hundred years and the technological capability of our age seems to solve one of the main hurdles that precluded the fulfilment of the immunity passport in the 1920s.

China, for example, has used artificial intelligence powered by supercomputers to produce an immunity passport of sorts, administrated at the city-level, to fight the COVID-19 outbreak: a health code application for smartphones. Using data collected via mass surveillance, Chinese cities have been able to ensure that only people conclusively free of COVID-19 – aka “green code” people – are allowed out in public. Those that have been in close contact with people that have tested positive for the virus or have been in locations that have high rates of the virus are confined to either central or home quarantine. This application has been heavily cited as a key measure in China’s seeming success in containing the COVID-19 outbreak relatively quickly, especially compared to western democracies that have been heavily afflicted.

Few countries outside of China have the capabilities or legal wiggle-room to engage in such mass surveillance, but any international immunity passport measure would likely aim to use some elements of the Chinese response, particularly the focus on utilising big data. Already, European governments have started using location data from mobile network providers to measure compliance with social distancing rules. South Korea has pioneered a radical individualized pinging of mobile phone users to provide detailed and publicly-accessible maps of the movements and location of individuals infected with COVID-19; while Taiwan has utilized this data to erect an “electronic fence” around people in quarantine. Companies, too, have made adjustments, such as the Emirates airline which became the first to introduce COVID-19 blood testing of passengers prior to boarding and issue health certificates.

However, while we now have the technological know-how to make the immunity passport a reality, the ethical issues raised back in the 1920s remain. For many, the proposal of an immunity passport is frightening because not only does it entails increased government surveillance, it threatens to significantly erode freedoms and civil liberties further. This ranges from increased inconveniences such as the use of health checks (on top of security checks already in place) for transport and large gatherings to the more insidious potential of the 24-hour invigilation of a person’s life – a modern take on the panopticon. Furthermore, it creates a potential class of “super-citizens,” whose immunity to COVID-19 may give them preferential treatment from entering their local supermarket to applying for jobs, travelling overseas, and holding public office.

Although governments are keen to stress that most of the tabled measures to combat COVID-19 are exceptional and designed to be in place only for the short term, the birth of the passport after the Spanish Flu pandemic is an illustration of how something introduced during a state of emergency can easily become a new normal. And it is on this point that one should first weigh the pros and cons of the potential introduction of an international immunity passport.

Nicholas Ross Smith is an Associate Professor of International Studies at the University of Nottingham Ningbo China.