Where were the Youth at the 2018 Global Land Forum? 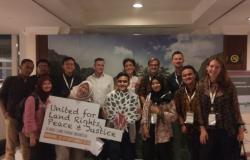 During panel discussions at the 2018 Global Land Forum on ‘Securing Land Rights for Youth’, Aneesh Thillenkery recognised the importance of the session; ‘there is finally a space for youth in ILC and I am very happy that it is here.’ Nevertheless, throughout the event, there was a notable absence of young land rights activists. Their only major physical representation was the Youth Congress meeting which lasted less than 2 hours on the Wednesday evening. Attempts to integrate youth-centred issues into discussions at group session largely failed. Whenever I mentioned this topic as part of working groups, people would not engage, mainly due to ambiguities in knowing their particular needs.

The panel highlighted the importance of addressing youth rights against the backdrop of an increasingly aging population, citing that 80% of the population in rural areas are over 60 years old. Problematic areas identified included the absence of examples of ‘spontaneous leadership’ in rural areas of Latin America, and the lack of youth participation in political discussions over their land rights regarding their territory.

Panelist Qhapaj Conde of Red Jovenes Indigenas highlighted that although indigenous youth are mobilised, the realisation of their land rights is not a priority and there was a ‘lack of youth identity over land.’ In part, this was attributed to migration to cities and overseas, Aneesh Thillenkery representing the Asia region describing this as follows: ‘They have an Asian heart but a Western dream.’ Elena Birca, the NES Representative of Moldova, echoed similar motivations in her region, highlighting significant differences between the law and the reality on the ground: ‘land titles don’t fit with the reality of land that young people hold. So young people leave the land to find easier ways to get income.’

A key point throughout were the absence of representation of youth in decision-making processes, evident particularly at national levels in terms of policy. Elena Birca described National Engagement Strategies (NES) to combat this, resulting from meetings with young people, which included the development of a national database to identify youth, and to create a communication network for landowners and farmers. Qhapaj Conde, however, argued in favour of the identification of strategies within umbrella organisations in order to realise generational change. Aneesh Thillenkery advocated for more creative strategies to re-engage the youth with land rights, describing the success of a energetic drama program centred around performances on land rights issues. An audience member drew on this, reasoning equally creatively that ‘farming should be creative to the youth’ and thus attractive job titles such as ‘Farming Analyst’ should be used to encourage them to pursue work in this field.

The representatives at the panel recognised the diversity of youth groups they represent.  In terms of strategies for the future, however, the debate failed to move beyond the point that successful strategies in one region of the world would not necessarily translate effectively to other areas due to varying social, economic and political systems. Therefore, there exists no united strategy identified beyond the importance of advocacy and law reform. Intersectional land-related issues facing global youth were entirely neglected in both the panel discussion and more widely across the conference. For example, young girls trapped in child marriages often have no legal title to the land they cultivate and this causes further harm as they cannot profit from the land by selling produce which could fund school fees for their children. Children are in turn trapped in this cycle of poverty, and have little education. Land rights are cited by many as a key way to preventing cycles of ‘poverty, violence and child marriage.’ Another example is LGBTQ+ youth, who can face significant discrimination when asserting land rights, including access to community land. The issues have been identified. The way forward remains uncertain.

If Trump Had Followed Vietnam’s Lead on COVID, US Would Have Fewer Than 100 Dead