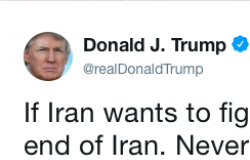 International Media Centre - G20 Osaka Summit. The circulation of US daily newspapers is at its lowest since the 1940s thanks to the growing influence of social media in an era of Twitter being the primary source of global news.

After announcing his forthcoming arrival in Osaka for the G20 summit (on Twitter of course), Trump shared 18 tweets in the space of 11 hours. His online activity is apparently the space to watch for updates on one of the most anticipated events for the global economy and, judging by the posts so far, the key themes proposed by Shinzo Abe have little relevance to Trump’s agenda.

Former reality TV star Donald Trump is not the first “celebrity” to enter the world of politics, but he is the first to find Twitter the best form of communication. Unlike former US presidents - Barack Obama, George W. Bush, and Bill Clinton to name a few - Trump is a political outsider so you wouldn’t expect entrance into the presidency to have been so easy. But it seems that all you need to have your voice heard in the political sphere is a strong social media following and more money than sense, making wealthy celebrities well-positioned to do well in this brave new era.

Celebrity politicians are not a new phenomenon and were around well before Twitter came to govern political announcements, but they are uniquely advantaged in politics and social media has elevated this dramatically. Ronald Reagan, the 40th US president, was a Hollywood movie star prior to his political career and is said to have been the most significant US president of the post-1945 era. Reagan’s political talent was amplified by his communication skills, achievable agendas, and understanding of how to discursively reconstruct conservative ideas - and how far to press them - without offending voters.

Trump, on the other hand, cannot resist tweeting about how he is “like…really smart”, how sexual assault is inevitable, and openly discussing Kim Kardashian’s “fat ass” and the sex appeal of his daughter. Trump’s opinion of what should be shared on social media raises deeper questions about the role of Twitter in broadcasting news, especially whether Twitter is the appropriate forum to introduce policy. Shouldn’t personal opinion be kept separate from the governance of a country? In an ideal world, the reporting of global politics should be left to reporters and expert analysts, and political decisions should be left to those with an appropriate political or legal background (in other words, Trump’s predecessors).

While his social status contributed towards his success during the election, guiding the US to war via Twitter is certainly not what the founders intended when creating the online platform. Trump’s Twitter-world is impulsive and has been described as a “social cancer” and anyone who feels the need to repeatedly call themselves a “stable genius” clearly isn’t.

The 280-character limit to a tweet means that it is not a forum for complex or sophisticated messages, perhaps indicative of the simple, populist messages governing politics right now. Tweeting requires almost no effort with little reflection or consideration of consequences. This informality does not fit with the role of the president of one of the world’s most influential countries whose pronouncements carry serious diplomatic consequences.

Social media has undoubtedly changed the way in which political communication is carried out in the US and this carries risks that were previously not present. There are benefits, such as immediate and direct communication between candidates and supporters, but the incoherence of messages spread through social media can drown out legitimate reporting mechanisms. There is now a risk that what constitutes “important” news will be determined by what celebrities are endorsing, and key political issues will go unrecognised in an era of refreshing Twitter instead of reading the morning newspaper.

At the G20, Trump intends to speak to Indian Prime Minister, Narendra Modi, about the tariffs against the US and while a “tentative truce” has been agreed between the US and China regarding the ongoing trade war, it will be interesting to see if the US president dictates to the summit as he did in Argentina 2018 or whether he sticks to his tweets and backs off from China.

Indeed, this creates another problem: decisively skewing the news agenda away from the substantive policy concerns of the summit towards the inconsequential tittle-tattle regarding the interactions of key leaders. Reporting thus becomes about a soap opera - what Trump did or did not say, whom he offended, and so on - rather than a serious reflection on the major challenges facing the world which the G20 is supposed to solve.

Nonetheless, there have been talks about personalities such as Oprah Winfrey and Kanye West running for US office, so it seems that if you have a million followers or more, you’re all set for a career in politics!