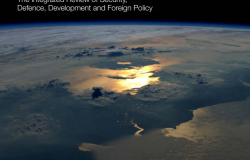 Fabio Petito argues that the UK is failing to realise the importance of regional blocks and has few realistic responses to the current crisis of the liberal international order.

Last week Boris Johnson presented the conclusions of his Integrated Review of security, defence, development and foreign policy (IR) described as “the most comprehensive articulation of a foreign policy and national security approach published by a British Government in decades”. This 100-page document, which was published after the PM’s presentation in Parliament, is the result of a year long consultation, which involved many experts and different stakeholders. I was involved myself in one of this private invitation-only dialogues, that Wilton Park convened with the Cabinet Office, but clearly my points, hesitantly  articulated online and expanded in a zoom chat, didn’t’ gather sufficient traction to shape the IR - by the way not sure what to make of the fact that the acronym used for this consultation is the same we constantly use to describe our field of International Relations (IR).

There is in fact, I would contend, a major geopolitical contradiction that underpins the rearticulation of this post-Brexit Global Britain strategy. The key message of the review is that the UK government will shift its foreign policy towards the Indo-Pacific, "increasingly the geopolitical centre of the world". The problem is that this new geo-strategy of “Indo-Pacific tilt” is not aligned with the UK geography and with new emerging global cultural-ideological environment. Therefore, the IR is simply a bad strategy which will deal a major external blow to the UK, even before we get into the discussion of its means and implementation.

The IR analysis of the geopolitical realities is broadly correct and arguably has been long overdue. As the IR suggests, the UK will operate in a world of “systemic competition”, i.e. a competition which “will determine the shape of the future international order”. More than 10 years ago here at the University of Sussex we launched an MA in Geopolitics & International Affairs to train the next generation of international professionals on the basis that the “The world is undergoing significant strategic and geopolitical redefinition exemplified by the rise of the new Great Powers and the shift of economic power away from the West”.

The predictions that the twenty-first century would have seen the emergence of a post-Western world have been around for a while. It is good that the UK strategy seems, at least implicitly, to finally acknowledge this geopolitical reality, which had become more visible as result of the failures in Afghanistan and Iraq and after the global financial crisis.

Whatever you might think of recent political-security developments and the impact of the pandemics, there is now a consensus that multipolarity is back and here to stay. Contrary to the post Cold-War narrative of globalisation, the international system is redesigning itself along regional lines and blocks.  The growing number and role of emerging regional centres of powers (China, India, Russia, Brazil, South Africa, Indonesia, etc…) is ultimately based on a long term economic estimation which suggests the fast progression of the (relative) economic decline of the West in favour of the new Asian fast-growing economies of China and India. This is, however, just one part of the story, the analysis of the current geopolitical condition, but what about the development of a strategy fit to successfully navigate this new geopolitical reality?

Jakub J. Grygiel has argued that a successful foreign policy strategy conceptually requires the alignment among the physical reality of Geography, the changing Geopolitical distribution of centres of resources and lines of communication, and Geostrategy as the geographic direction of a state’s foreign policy. The problem is that for the UK to tilt globally to the Indo-Pacific is geographically challenging, to say the least, in a context where the regional level (in this case the EU) has become geopolitically more relevant than the global one. This Indo-Pacific geo-strategy is doomed to fail for, brilliantly, not understanding, at the same time, the geographical constraints of proximity (of a middle-sized island locked in the north-western part of Europe) and the geopolitical changes (of an international system becoming more multipolar and regional).

In addition to that, in my view the IR doesn’t go far enough in thinking through the implications of, and the possible realistic responses to, the current crisis of the liberal international order, which was designed and supported by the US and its allies after WWII.

The IR acknowledges that ‘illiberal’ powers are revisionist powers which will try to shape the future world order, but it doesn’t regard this as an epoch-making process of transformation beyond its liberal and Western-centric matrix. In other words, the IR doesn’t really engage with the gradual ideological transformation of the normative structure of international society, first of all visible in the global resurgence of cultural and religious pluralism as well as in the quest for cultural authenticity and civilizational states in the non-Western worlds.

In my view, whether it is the issue of democracy, human rights or secularism, it is becoming increasingly clear that the merging of ‘modern’ political values and practices with traditional local cultural references and ways of living will be the rule rather than the exception in a post-Western post-liberal world. And the different religious traditions of Islam, Confucianism, Hinduism, Buddhism, Christian Orthodoxy, to other civilizational traditions, will act as cultural sources for the enactment of different programmes of modernity.

A new multipolar world in a context of civilizational politics and multiple modernities require a new strategic thinking and different forms of literacies in the West that are, I am afraid, not yet available. Willy-nilly we need to imagine a pragmatic exit strategy from the Western-centric and liberal international order towards a rule-based international system that will need to accommodate much more the interests, values and cultures of the non-Western world. We need a conceptual and political framework to answer this momentous challenge and help to shape the future international order of the 21st century but I am afraid the IR doesn’t rise to this challenge.

This might seem a set of very general philosophical statements and issues. The ones that foreign policy practitioners tend to dismiss as too theoretical and, to some extent, I accept this point. I would argue, however, that this issue will become concretely visible when the Prime Minister will visit India at the end of next month as a foretold foundational trip to unlock the opportunities of the Indo-Pacific tilt.

Will India accept the framing of the meeting only in terms of liberal categories, as the meeting with the largest democracy in the world? Will Narendra Modi’s strongly held belief that India is a civilizational state rooted in Hinduism be irrelevant to his dealings with the former colonial master, when just a week ago, pointing out that the country would be celebrating 75 years of its independence next year, the Indian PM Modi argued for enhancing the indigenisation in the national security system. Not just in sourcing equipment and weapons but also in the doctrines, procedures and customs practised in the armed forces?

Some years ago, in a pre-Brexit world, Patrick Porter complained, in an interesting piece, that the UK doesn’t do grand strategy. In this respect the RI is a welcome development. I wonder, however, if an ethnocentric strategy of post-Brexit imperial nostalgia fits the ancient Latin motto that sometimes the remedy maybe worse than the disease.