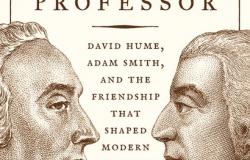 Branko Milanovic explores the life of the enigmatic economist through a recent book on his friendship with David Hume.

Dennis Rasmussen’s book The infidel and the professor is a pleasure to read. It is an excellent introduction to the thinking and the friendship of David Hume (le bon David as he was dubbed by the philosophes during his wildly successful sojourn in France) and Adam Smith. I had a book recommended to me by a friend, and I read it with two objectives in mind: first, to get a bit more of a feeling for Adam Smith as a person, and second, to learn more about his relations with the physiocrats while he lived in France, On both accounts, I learned nothing. Still, the book was a pleasure to read: it is well structured, not overly technical, and very well written.

Of the five economists I discuss in my forthcoming book (Quesnay, Smith, Ricardo, Marx, Pareto) I find Smith the most enigmatic. This book confirms him as being reserved, a somewhat distant and lonesome character despite dinners and company that he seemed to have, intermittently, enjoyed. Rasmussen’s thesis about the very close friendship between Hume and Smith is somewhat dubious, or is at least exaggerated. Rasmussen, for example, claims that it was the closest and/or the most important intellectual friendships in history. But just going over the five authors I mentioned, there are intellectual friendships that seem stronger: Quesnay and Mirabeau as well as Marx and Engels coauthored articles and books; Ricardo and Malthus, and Pareto and Pantaleoni corresponded much more frequently than Hume and Smith. 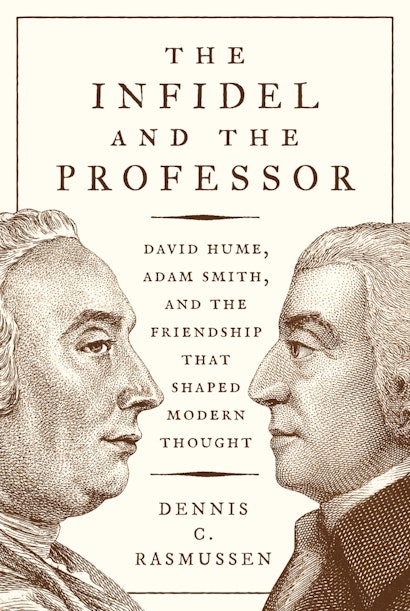 So how close was the Hume-Smith friendship?  They did not spend almost any time living in the same place: when Smith was in Glasgow, Hume was in Edinburgh; when Smith finally moved to Edinburgh, Hume was dead for a year. According to Rasmussen, they exchanged 170 letters, of which only 56 are still extant (15 from Smith to Hume and 41 from Hume to Smith). Hume and Smith met in 1749 and Hume died in 1776. That means, on average, 6.3 letters per year—not an extravagant number for a  seemingly very close friendship. In this relationship, Hume is the insistent partner, often beseeching Adam Smith to visit him, reinviting him again, finding schemes that might please him and induce him to come. Smith’s letters are mostly technical in nature: they ask for Hume’s recommendations (especially during Smith’s stay in France) and bring to Hume’s attention this or that of Smith’s students or friends. Lack of Smith engagement with Hume’s incessant invitations can also be read—a hypothesis Rasmussen does not mention—as a slight annoyance with an obstreperous friend: rather than having to find endless excuses for not getting together Smith just prefers to keep quiet.

Hume’s open, vivacious  and friendly temperament, attested by all, was very different from Smith’s. In this partnership the usual roles between a younger and older partner were reversed: while usually a younger partner tends to seek out the older and better established partner’s friendship and to ask for his advice, here we have a twelve-year older and more famous Hume asking for Smith’s company, and Smith often proffering advice to Hume. In fact, Smith’s advice is always on point: good, rational, cautious and mindful of the intellectual and political climate. The role reversal was due to the temperamental difference between the two men:  the less guarded and much more lively older man, and the very deliberate and thoughtful younger one.

Other than confirming Smith’s reserved and prudent nature as well as his wisdom, both in dealing with people and in his writings, the book does not throw new light on Smith’s life: his relations with his mother and the family, his amorous life (apparently non-existent) or his wealth. This is not the primary objective of the book since it tries to document Hume’s and Smith’s intellectual mutual influence (Smith seems to have in many instances benefitted from Hume’s—the reverse is practically non-existent), not their lives. However, Rasmussen’s emphasis on their friendship inevitably drives the book towards the personal side of both thinkers. The book thus falls somewhere between intellectual history and a biography à deux.

On my second topic of interest, the influence of physiocrats on Smith, there is nothing in the book. Smith’s stay in France (from January 1764 to the Fall of 1766) is given in the chronological order but with very few details. I do not think that this is due to Rasmussen’s choice: other books on Smith’s travels in France are equally vague. There is simply not enough information on what Smith did in France, and by whom he might have been influenced.

Rasmussen makes the usual nod to Smith having met with d’Alambert, Voltaire, Quesnay etc. in Toulouse and Paris, but this is all that we know. Even the word “met” is, I think, hardly appropriate in this case. Smith’s spoken French was quite poor; his understanding was probably not much better, especially not in a salon where several people would speak at the same time and where topics would easily mix personal intrigue and gossip with philosophy. So, it may seem more appropriate to say that Smith was a few times (we do not know how many: three, five, ten, twenty?) in presence of the French luminaries. No document referring to their discussions or conversations exists.

One wonders how Smith was spending his days in Toulouse with his young change, the Duke of Buccleuch. Were they made of the same solitary routine as his ten years in Kirkcaldy during which he wrote most of The Wealth of Nations?  What did Adam Smith do evening after evening in Toulouse? Surely, he was not conversing with the eight-year old Duke, nor did he have any French acquaintance to visit or entertain (as he himself complains in his letter to Hume—asking, as usual, for Hume’s intercession on his behalf). Spending eighteen months like that, at the age of 41, must not have been especially pleasant.

The combination of intellectual and personal history is at its best in the chapters that describe the nasty querelle between Rousseau and Hume (actually, the querelle was almost entirely in Rousseau’s mind and was of his creation), Smith’s refusal, in the last months of Hume’s life, to publish his strongly anti-religious Dialogues, and finally the Socrates-like Hume’s final days when “everyone” was curious to see whether the impious philosopher would succumb to the dread of annihilation and, as many have done, espouse religion in the last hours of his life. As is well known, Hume did not do so.

But, in the end, it is worth mentioning Smith’s reaction to Hume’s request to publish posthumously his Dialogues. Rasmussen provides several hypotheses for Smith’s decision, and I think that the most sensible one has to do with Smith’s self-interest. Given Hume’s terminally declining health, the posthumous publication of the Dialogues would have come just months after the publication of The Wealth of Nations. At that point--especially at that point!—Smith was not keen of getting embroiled in a row over religion which could not only taint him with the epithet of atheist but would eclipse his just released book, in whose writing he had spent, on and off, two decades of his life.

Smith’s decision was fully comprehensible and in keeping with his personal interest. By unfortunate coincidence, it happened to mean the rejection of a favor being asked by a dying man who was his friend and from whom he has learned a lot. Smith had to choose between the philosophy of the Theory of Moral Sentiments that applies to our relations with family, friends and others close to us, and the philosophy of The Wealth of Nations that applies to our relations with the rest of the world. He chose the second even if, by his own criteria, he should have chosen the first.