Digital Identity for Refugees in India: Empowerment or Surveillance? 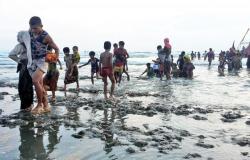 Astha Kapoor explores Rohingya refugees' fight for their entitlements and the story of their digital identity in India.

The discussion of digital identity for refugees has been gathering pace in the last few years. This question has been central to human rights, and more recently, the Sustainable Development Goals (SDGs) which aim to provide legal identity for all, including birth registration by 2030. Refugees need identification for registration on arrival, registration in camps, and service provision. The introduction of digital identification makes the process efficient and transparent. However, for refugees this is a complicated exercise as identification can be used as a tool of empowerment as well as for surveillance. This article explores the different facets of this issue, using the example of Rohingya refugees fleeing persecution in Myanmar to Bangladesh and India.

Since opening its doors to Zoroastrians – now a flourishing minority in India – in the 8th century, India has accepted refugees. Among those admitted in the last fifty years have been people from East Pakistan, Sri Lanka and Afghanistan as well as refugees who have been the subject of contention, such as the Dalai Lama. Yet, India does not have a cohesive law or policy on refugees. Nor is it a signatory to the 1951 United Nations Refugee Convention or the 1967 Protocol on Refugees. As such, refugees do not have an official legal status or identity numbers and are marginalized, unable to access government benefits or services and living in destitution.

Rohingyas, the long-persecuted Muslim minority from Myanmar, are the most recent influx of people looking for refuge in India. While by some estimates there are over 40,000 Rohingya refugees in India, the United Nations High Commissioner for Refugees (UNHCR) has only been able to issue refugee cards to 17,500 due to uncertainty over whether they should be considered illegal immigrants or refugees.

Meanwhile, the Supreme Court of India is in the process of deciding whether or not Rohingyas can be deported to Bangladesh. This case is a key opportunity to lay down basic protections for and create precedence on the matter of refugees in India. A favorable judgement would grant not just Rohingyas, but also other refugees in India legal refugee status and therefore the leverage to demand basic amenities from the state.

At the same time, two refugees, Mohammad Salimullah and Mohammad Shaqir, recently petitioned India’s Supreme Court to uphold and realize the rights of refugees from Myanmar to health and education, on the same basis that has provided for similar services for Tamil refugees since the 1990s. Given that there are no laws pertaining to refugees in India, the decision to extend support is made on an ad hoc basis and some speculate that Rohingyas are not being treated hospitably because they are Muslim and face unfounded allegations of terrorism. In its response, the Indian government claims that refugees already have access to basic services. Lawyers acting for the Rohingyas argue that this cannot possibly be true, since the refugees are not assigned the all-important biometric identity number, Aadhaar, which is a prerequisite for such access as well as essential for opening bank accounts, procuring SIM cards and seeking work. As a result, refugees are systematically excluded and marginalized.

The Unique Identification Authority of India, which issues Aadhaar, maintains both that the biometric identity is simply a proof of residence and that it allows anyone living in India for more than 182 days to register for one. However, because of the lack of clarity about the status of Rohingya refugees, Aadhaar is not issued to them and even held from those who have registered with the government or UNHCR and are officially recognized as refugees. As such, and despite the fact that the Constitution of India guarantees the right to a dignified life to all residents of the country, Rohingya children are unable to go to school, women do not have access to reproductive health, and malnutrition is rampant in the squalid camps that have sprung up in the northern and eastern parts of the country. Aadhaar, envisioned as a tool for inclusion and empowerment by the Government of India, is being used to exclude Rohingyas.

The Rohingyas’ fight for their entitlements and the story of digital identity in India are intertwined with another Supreme Court case, which is likely to decide whether Aadhaar is mandatory for all residents to access government services. The Indian government, which is pushing the courts to rule for the deportation of Rohingya refugees, wants to identify all those in the country. In a county like India – with its large, undocumented population – Aadhaar would make this process much easier.

The UN believes digital identity part of realizing the “right to recognition,” and UNHCR is recording the biometric identities of refugees both to ensure that everyone is identified and to avoid a duplication and/or theft of identities. This right, however, may prove to be a double-edged sword. Rohingyas need the identity number to obtain any services within India, yet this identity number can also be misused, for example for surveillance and for identification of refugees for deportation. In Bangladesh, for instance, where Rohingya refugees have been given biometric identity numbers so that they can access benefits, this tool is also used to regulate their movement and ensure that they do not leave refugee camps. As Professor James C. Scott (Yale University) noted, the state is interested in making its subjects “legible,” or making a detailed map of its citizens to perhaps govern them efficiently. However, legibility or readability also appeals to the predatory nature of the state – digital identity is at the core of that tussle.

The risks of data collection among refugees must be mitigated through data minimization or collecting only the bare minimum in order to verify a person’s identity. This is critical to prevent surveillance that could lead to mass human rights abuses, as in the case of Rwanda, where ethnic group specification on personal ID cards aided those committing genocide. It is also imperative to have a distributed trust model through blockchain so that data is encrypted and stored in a decentralized manner and transactions are transparent. These mechanisms can reduce the risk of a data breach and related exploitation.

In the midst of these debates, India has a rare opportunity to frame the country’s approach to refugees and to biometric identity numbers, and to decide what kind of state it wants to become: one that does not provide refugees with basic amenities and deports them to a country where they are persecuted, a state that uses biometric identity to surveil refugees and control their movements while allowing them to stay within the borders of the country, or one that uses innovative technology for inclusive and empowering policies. It is high time for the Supreme Court of India to come to progressive judgements that use digital identity to empower and safeguard the well-being of all those residing within the borders of India, and to guarantee their right to privacy – a critical element of a dignified life.

Astha Kapoor is an independent consultant who works on the interface between technology and governance. She is also a GGF 2030 fellow. The view expressed here are her own.