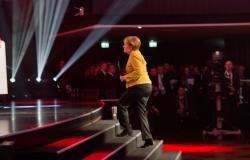 In hindsight, it is ironic – and symbolic – that the outgoing chancellor who refused to chart a course for Germany in the world came to be seen as the leader of Western democracies during her last term. She too does not have a recipe for how to deal with volatile world of increasingly assertive authoritarian powers.

Tomorrow, the era of Angela Merkel as German chancellor will end. She came to office in 2005, shortly after the Iraq war, which she had supported from the opposition benches. At that time, Russia was, in fact, still the ‘regional power’ that US President Obama would erroneously call it later on, in 2014, when it had just invaded Crimea. Now it has established a military foothold in the Middle East far beyond Syria, where it is a warring party, and is again threatening destabilization and outright war in Europe’s East. Meanwhile, over the 16 years of her chancellorship, China has become the world’s industrial and technological powerhouse, demonstrating that a country can be (increasingly) autocratic and still economically successful. Also beyond Beijing and Moscow, there’s little doubt that the autocrats are winning.

So, while it is often thought that Merkel’s calm leadership more than once prevented a worse outcome – think of the debt crisis in Europe or the negotiations with Russia over Ukraine – it is fair to ask how she contributed to the broader direction of “the West” that she has supposedly led as of recent. Here, a first look at Germany is instructive.

As is well known, Angela Merkel rose to being a full-time politician in the short period of German unification in 1990. In addition to her personal background as a trained physician hailing from a protestant pastor’s family in East Germany, it is those first years in politics during the transition from what was the Bonn Republic to a unified nation that left a mark on her.

Unsurprisingly, politicians of all stripes then were adamant to re-assure allies that the populous and economically strong old-new country would be just as timid internationally as it was during the Cold War. When Germany experienced its first full change of government in 1998 in nearly five decades from the liberal-conservative to the social-democrat-green camp, the freshly elected chancellor was quick to promise, well, continuity. He then led the country to participate in the NATO campaigns in Kosovo and, later, in Afghanistan, famously drawing the line at Iraq in 2003.

Upon assuming office, Angela Merkel did not have much of a foreign policy platform to showcase. Her four different governments have been oscillating between cavalier solo efforts on the 2011 Libya intervention as well as on energy relations with Russia (that’s Nord Stream 2), and admirable efforts to hold the union together (no more, no less) bracing the 2009-2012 financial crisis as well as during the current Covid-19 pandemic. Merkel’s handling of the migration peak in 2015 has had a lasting impact on German society, partly due to what comes down to a foreign policy omission: The failure to tackle those famous ‘root causes’ early on, to consult with European partners, even to protect its borders or prepare internally, both at the level of administrative management and public opinion.

More generally, the chancellor has broadly failed to reach out to German citizens to explain to them the momentous changes building up around the country during her tenure. As it happened, her most consequential foreign policy statement hardly resonated inside the Bavarian beer tent where she spoke in 2017 after returning from the G7 summit in Sicily: “The times in which we could completely depend on others are on the way out,” she said without much fanfare and in her own fumbled ways.

Translation: After the British EU referendum and the election of Trump, Europeans had to take their destiny into their own hands.

That was it, no further explanation given at the time, despite that momentous statement. No government conclave assembled on what this would mean for Germany, no commission was convocated to elaborate on the details. Never mind that the federal government had just published its White Paper on Security Policy after broad inter-departmental coordination and public consultation, making no such reference. Let alone that Merkel herself would have used the 2017 election campaign to make her case why – in the face of allies turning away and adversaries turning more aggressive – only she could lead a re-orientation of Germany towards a more active international role.

Now, she’s stepping down in the middle of the pandemic’s fourth wave and without giving the country a sense of direction.

Interestingly, Germany is not alone in this soul-searching, as major democracies have begun to search for meaning too in an increasingly volatile, uncertain, complex, and ambiguous world. If the UK after Brexit is formally on a mission to redefine its place in the world outside the EU, France has for decades tried to determine its role through the EU itself. Successive recent French Presidents, from Jacques Chirac slow-rolling the bloc’s enlargement by the Americanophile East to Nicolas Sarkozy aiming to create an EU-clone around the Mediterranean to Macron dreaming of European sovereignty, have used their leadership to shape the union according to France’s global interests.

Even the United States has now joined the fray, or how else could the revealing admission by Jake Sullivan, now the U.S. national security advisor, be understood, when he wrote in 2018 that Washington “still hasn’t found a durable answer to the most basic of questions: What is American foreign policy for?” Twenty years earlier, the United States had safely considered itself indispensable; then began the “endless wars” in the Middle East, followed by entrenched polarization over issues like environment, trade, and migration.

Making any wild guesses about what Merkel could have achieved had she been a more active, more ambitious politician in international affairs, is futile. She may have only outlasted so many of her peers because of her sober, minimalistic, and methodological style that drew her away from grandiose projects like creating a unified Europe, saving democracy after Trump, or only defining Germany’s role in the world. That leaves a much less capable crowd of politicians with the enormous tasks out there.

'Your Own Space and Time': Spatiality and Temporality in the Study of the International Organisations of the Middle East