After Afghanistan, NATO Must Adjust in Iraq 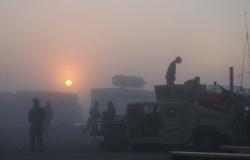 Following the messy military withdrawal from Afghanistan, many questions remain for NATO and its member states. With concerns that the United States’ growing reluctance to remain engaged militarily in the Middle East could create possibilities for further instability in the region, the Alliance should work to learn the lessons of Afghanistan and recalibrate its mission in Iraq. This would send a message to friends and foes that it remains committed to peace and stability, particularly in the countries where it maintains a military presence.

The helter-skelter manner in which American and subsequently NATO forces withdrew from Afghanistan in August 2021 caused consternation for many across allied capitals and beyond. Armin Laschet, the leader of Germany’s centre-right CDU party, declared that the moment was “the biggest debacle that NATO has suffered since its creation” and suggested that the Alliance was facing a new – and more uncertain – era. The anxiety within the transatlantic community not only stemmed from the reputational damage being inflicted by the chaotic exit from the country, but also from fears that American disengagement could have a negative impact on NATO’s credibility as an international actor.

Following the U.S. decision to leave Afghanistan, a continued NATO presence in the country, even if viewed favourably by some allies, was no longer realistic. British Defence Secretary Ben Wallace remarked that some NATO members considered forming a coalition to maintain the mission in Afghanistan, “but rapidly came to the conclusion that this was inconceivable without the critical enablers provided by Washington, notably its air support.” Even Turkey, the NATO member state most committed to a long-term engagement in Afghanistan, requested significant US financial and logistics support to continue operating Kabul International Airport once NATO troops had gone.

Hence, it was a fait accompli that NATO foreign and defence ministers would follow the United States’ decision to withdraw their forces from the country back in March. However, what should have been an organised exit was complicated by the collapse of the Afghan government and the rapid re-conquest of the country by the Taliban – two developments that should push the Alliance to recalibrate its thinking in neighbouring Iraq. As doubts persist over the United States’ commitment to foreign engagement, especially in the Middle East, NATO Mission Iraq (NMI) can be an example of sustainable engagement that incorporates lessons learned from Afghanistan and reflects the Alliance’s ability to adapt so as to face tomorrow’s challenges.

In the last few years, the Iraqi state, with the aid of external forces, has managed to reclaim approximately 95 per cent of the territory it had lost to Daesh. This resulted in the relative stabilisation of the security situation, but the country nonetheless remains fragile. The terrorist organisation continues to launch attacks in the country, and there is an official consensus that without continued vigilance, the group has the capacity to regain a firmer foothold that would allow it carry out larger-scale attacks in the future. At the Baghdad Conference for Cooperation and Partnership in August 2021, French President Emmanuel Macron noted that the fight against terrorism in the country was not over and underlined that Iraq’s stability is ‘essential’ to that of the Middle East as a whole.

The precariousness of Iraq’s security situation underlines why NMI’s stated mission - to “strengthen the Iraqi security institutions and forces so that they are able to prevent the return of ISIS, fight terrorism, and stabilise their country” – remains relevant. However, to make matters more complicated, the Iraqi security sector lacks cohesion, with several defence forces of varying size, capabilities and affiliations operating within the country. The most notable of these, the Popular Mobilisation Forces (PMF) and Kurdish Security Forces (i.e., Peshmerga), contributed heavily to the military defeat of Daesh but maintain tenuous links to Baghdad. Iraqi dependence on and militias that are not willing to accept federal oversight or control can undermine the legitimacy of the state, particularly when they draw resources from foreign actors. NATO’s training efforts and engagement can help to build a more inclusive security apparatus that brings some of these forces together, and which would therefore be more resilient in the long-term as Iraq continues to face threats posed by terrorist organisations.

Following recent parliamentary elections, whoever manages to form the new government in Baghdad will have to face these serious challenges in addition to a dismal economic situation. Inaction could result in further instability in the country, carrying severe implications for security across the Middle East, such as fuelling terrorism, conflict, and mass migration – consequences that NATO members on both sides of the Atlantic would feel directly.

After Afghanistan, there are both short- and long-term adjustments for the Alliance to make vis-à-vis its operations in Iraq and beyond. The first is that NATO member states must accept their intelligence failure after being unable to predict the swift collapse of the Afghan army in the face of the Taliban’s military advancement across the country. Secretary-General Jens Stoltenberg admitted himself the Alliance was not expecting events to occur as they did so quickly, and while that context is different from Iraq’s, a similar scenario cannot be repeated. The Afghanistan crisis can thus be used as a moment to shift NATO’s strategic outlook and establish a new framework for the future, so as to ensure it is politically planning (in closer unison among allies) ahead in Iraq rather than simply reacting to events as they occur.

Another consideration is military training. Like in Afghanistan, NMI works with the Iraqi state to help build more effective security institutions through training and advice, which contributes to the fight against terrorism. However, the collapse of Afghan security forces in the face of the Taliban revival left a deep scar in the reputation of NATO’s training capacities. As boosting training and capacity building of partner countries is a key part of NATO’s 2030 Initiative, allies will have to conduct a realistic assessment of the training aspects of NMI to analyse its progress and avoid the future collapse of local armies.

Lastly, NATO must strive become less dependent on a single member’s capacities going forward to make missions more sustainable. The good news is that in Iraq, this process is already underway and America’s reluctance to maintain a larger presence in the region could force NATO to adapt accordingly. Recently, NATO defence ministers decided to expand NMI following a request by the Iraqi government, even though the United States has taken steps to reduce its presence in the country. NMI will now include training centres outside of Baghdad and be supported by European troops, commanded by Italy – signs that allies continue to recognise the importance of the mission whilst supporting its sustainability.

Due to the precarious security situation in Iraq, as well as the scars left by the Afghan crisis, NATO must draw on these lessons as quickly as possible to adapt in what is a more uncertain geopolitical environment. Continued volatility could become an export source of instability, and allies must therefore adjust to show forces of destabilisation in the region that the Alliance is committed to the future stability of Iraq and the Middle East a whole.

Matthew Jabłoński is currently an official at the NATO Parliamentary Assembly, working as a coordinator for the Economics & Security Committee. Previously, he worked within the Humanitarian Diplomacy section at the International Committee of the Red Cross and the Political Section of Arms-Control, Disarmament and Non-Proliferation at the Delegation of the European Union to the United Nations in Geneva. Matthew’s previous work has focused on the foreign policy of the European Union, as well as conflict prevention and management in Eastern Europe and Central Asia. He holds an MA in European Affairs from the Institut d’études politiques de Paris. The views reflected in this article are the author’s alone and do not represent the views of any organization.