From Welfare in One Country to Global Poverty Alleviation...and Now Where? 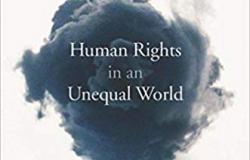 There is a Chinese saying about two people sharing the same bed but dreaming different dreams. Samuel Moyn’s book “Not Enough” is about such uneasy alliance between political freedoms (human rights) and economic welfare. It does not facilitate things that the latter comes under two guises: the need for “sufficiency” (not letting anyone fall below a certain poverty floor) and economic equality.
Moyn’s book opens with the French Revolution and the short rule of the Jacobins who introduced, at least in the realm of ideas, not only political but also economic equality. It is no surprise that some thirty years later, Chateaubriand in his marvelous “Memoires d’Outre Tombe”, would claim that the only true French religion is the one of economic levelling. Moyn’s story then goes—but not in a strict chronological order—over the predictable episodes of Bismarck, the Russian Revolution,Beveridge, and Roosevelt, and the conflict between political rights and ability to really exercise those rights (economic “sufficiency”). But these are not the best parts of the book. It is unfortunate that they are in the beginning because many a reader (I fear) may get put off by, at times, stultifying prose, very complex sentences, and clever “interactions” between Bismarckian and Hitlerite welfare states, Swedish and American social protection for men only etc.

This is a well-trodden ground of the welfare state in a single country, and is not, I have say, particularly new or exciting.
The book picks up (and then how!) when it moves to the debate between human rights and economic “sufficiency” at the global level: a topic which did not even exist before the 1960s. I wondered why the writing suddenly came to life: the writer is the same. The reason is that here Moyn follows a chronological approach: he starts with Gunnar Myrdal, moves to the New International Economic Order (NIEO) of the non-aligned, Prebisch and the structuralists, then to the basic needs (ul Haq and Sen), to global justice (Beitz and Shue), and ends with neoliberalism and human rights.
The chronological approach gives to the book energy and excitement that the first three chapters lack—because the chronological approach lets us see how B follows upon A, not necessarily in the exact opposition to A, but often by taking some elements from A and replacing others. It also shows us how the discussion was framed by the political developments at the time: NIEO by the ascendance of the Third World and the non-aligned, basic needs by the debt crisis and the rejection of the welfare state in the West, global distributive justice by globalization.
The book shows us, brilliantly, the unlikely trajectory whereby the focus on poverty alleviation globally got linked with the protection of human rights, globally as well, and how the latter, after being invoked in order to provide a justification for the unipolar moment, intellectually collapsed together the Washington consensus.
The most interesting contrast, in my opinion, is between the NIEO and the doctrine of basic needs (see the Table below). NIEO was essentially a state-based effort mounted by the Third World countries, many of them despotically ruled, to change globalization playbook, to allow easier access to technology, lower tariffs to their exports, and greater aid. But it was founded on the idea of national independence, and thus on the UN-enshrined, but often abused, idea of non-interference in internal affairs. The Third World wanted the West (the Second World played almost no role in this) to provide them with trade advantages and more money, in order to stop divergence in mean country incomes—but not to be allowed to ask any questions about how the money was spent or whether the poor in recipient countries actually benefited from it. The main unit of discourse was the state. The world was just an aggregation of nation-states.

The basic needs approach, on the other hand, being born as the NIEO faltered  under the twin “attack” of the rising cost of oil and the debt crisis precipitated by Volcker’s increase in interest rates, took exactly the opposite approach. The key unit of interest was no longer the state but the individual. (Moyn does an excellent job in showing how Charles Beitz’s “Political Theory and International Relations”, that took several years to be published, underwent a subtle but significant change in that direction.) The key interest therefore was no longer to stop the divergence in mean country incomes but to help individuals who are poor become less poor. But helping the poor people wherever they may be meant also disregarding the rule of non-interference in domestic affairs and having, as it were, a direct relationship with people in poor countries. To put it brutally, that meant that the World Bank in Washington would, theoretically, have a direct relationship with the poor people in Tanzania without the intermediation of the Tanzanian nation-state (and of course would criticize the Tanzanian nation state if it did not reduce poverty enough or if it was corrupt). The state had no longer agency.
Now, that approach which circumvents the nation-state makes lots of sense also when applied to the protection of human rights. The core human rights (say, the right to free speech, to political participation, to non-discrimination, to the fair trial etc.). should also be globally monitored, and the relationship should be direct between the monitors (but who are the monitors?) and individuals at risk. It is at that point that, ideologically, the basic needs doctrine (and elimination of absolute poverty) became close friends with Northern NGOs that, really or ostensibly, cared about human rights in (by now called) “emerging countries”.
Moyn rightfully singles out the role of East European revolutions that were, compared to any other historical revolution, unique in *not* dealing or putting forward any economic claims (even, paradoxically, dismissing them a priori). They  highlighted only the claims of political freedom. What better example than “Solidarnosc” that started as a free trade union but ended up not saying a word when the Gdansk shipyard, its birthplace, was dismantled as economically unviable under the new regime.
The high point of neoliberism in the 1990s thus involved an ideologically coherent trinity of the Washington Consensus, basic needs (reduction of the absolute poverty globally), and protection of human rights. The role of the nation-state, especially of the weaker nation-states, became nil: they received their policy prescriptions straight from the Washington-based international organizations, whether it be about budget deficits or the best ways to organize social assistance, and then from the equally Washington-based, and often State Department-affiliated, human rights NGOs.
It was an ideal world for some, and less ideal for others. But that world came crashing down because of the overreach exemplified in the Iraq invasion, and then because of the Global Financial Crisis and loss of confidence in the “core countries” that undergirded  it. The fact that the most important poverty reduction ever was achieved by not following the Washington creed further reduced its intellectual appeal.
This is a topic that I would like to discuss in my next post, perhaps, like this one, written in Washington DC.
This post first appeared on Branko's blog and was reposted with permission.