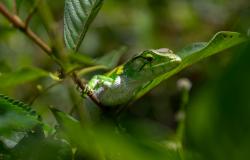 Ecosystems and biodiversity are vulnerable to ongoing climate change and extreme weather disruptions. Can you think of any global or regional initiative that is effective in preserving biodiversity? What makes it successful?

The past three decades of multilateral efforts have not succeeded in halting biodiversity loss or sufficiently accounted for the multiple interlinkages between climate change and biodiversity. Addressing climate and biodiversity objectives together has the most potential for success. For instance, estimates suggest that 30 percent of the mitigation measures needed to reach the Paris Agreement’s goals could be provided through so-called “nature-based solutions” (NbS) – measures that use nature and ecosystem services to reach mitigation outcomes. If NbS are implemented in line with global standards (e.g., the International Union for Conservation of Nature (IUCN) Global Standard on NbS), they will generate net gains for biodiversity while simultaneously respecting the rights and needs of local stakeholders.

Despite the limited success of multilateral negotiations in addressing biodiversity loss, the number of initiatives led by non-state and subnational actors are increasing. One example is the Cities with Nature initiative led by ICLEI, The Nature Conservancy (TNC) and IUCN, which is financed by the German Ministry for the Environment (BMU). This initiative supports cities and local governments in implementing NbS and tracking their contributions on a digital platform. In doing so, cities can make visible the different initiatives they adopt to address climate and biodiversity objectives as well as contribute to global biodiversity governance, while also confronting other societal challenges.

Why is a global approach to climate change so important to ensuring the future of human security despite the challenges associated with getting governments to make meaningful commitments and to live up to them?

Current commitments to reduce greenhouse gases (GHG) are setting us on a path for a 2.4-degree Celsius world which is not enough to reach the goals of the Paris Agreement. Even more concerning, implementation of these commitments is still lagging behind, heading us toward a 2.9-degree scenario. Climate change is a global problem that requires collective action: GHG emissions by individual countries have international consequences, and any solution needs to be global in scale. With international value chains stretching across many different countries, it can be challenging to decide whether GHG emissions should be counted on the production or the consumption side. This calls for a collective effort where all stakeholders take responsibility and implement adequate measures to reduce GHG emissions. With the Paris Agreement, both so-called industrialized and developing countries pledged their commitment to reduce GHG emissions and adapt to the effects of climate change. To make this possible, financial and technical support with developing countries aims to aid them in mitigating and adapting to climate change. This is particularly relevant since GHG emissions originally rose with industrialization in Europe and the United States. Over the past decades, some emerging economies have become major GHG emitters. Global cooperation needs to help promote transitions toward climate-friendly technologies as countries increase their demands for energy and resources.

The past decade has seen China launch different initiatives to establish a green financial system. Despite these efforts, the country ranks as the biggest polluter and energy consumer in the world. Has China made any meaningful impact to address environmental degradation at home and its associated consequences beyond its borders?

China pledged to peak its emissions by 2030 and reach carbon neutrality by 2060. To reach this goal, Beijing is investing heavily in renewable energies, electrification of the transport sector and is implementing large-scale forest restoration programs. For instance, almost half the electric cars and almost all electric buses worldwide are in China. These investments go hand-in-hand with China’s efforts to promote green finance through adjustments to its financial, fiscal and environmental policies. In addition, China is one of the largest issuers of green bonds in the world.

However, China is still the largest emitter of GHG and continues to invest in coal-fired power within its borders and abroad. In fact, Beijing’s definition of green bonds allows for investments into “clean coal”, meaning the replacement of older coal plants with more efficient production centers. This is inconsistent with international standards and risks further raising carbon emissions for the medium and long term. The financial sector is a key actor that can trigger a transformation of the energy sector. However, if China continues to invest in coal both nationally and abroad, this will overshadow many of the important emission reductions made in other sectors.

Has the COVID-19 pandemic affected biodiversity conservation? If so, how?

Pandemics and biodiversity loss are both caused by similar activities: namely, human encroachment on intact ecosystems such as global agricultural expansion and intensification and unregulated wildlife trade. Encroachment – meaning the spread of human activities into natural areas – increases the risk of virus transmission from animals to humans. A recent report by the Intergovernmental Platform on Biodiversity and Ecosystem Services (IPBES) confirmed this trend. The report also warns that pandemics could occur with even greater frequency in the future. In particular, COVID-19 has highlighted the risks associated with industrial animal husbandry, which is part of a global food production system with devastating effects for biodiversity.

On the positive side, these interlinkages between biodiversity and human health present an opportunity to more effectively communicate the importance of collectively addressing the global biodiversity crisis. The new global biodiversity framework, currently under negotiation, which is set to be adopted soon in Kunming, China, could benefit from this momentum.

Biodiversity mainstreaming efforts – i.e., initiatives to include environmental and sustainability concepts in policy, plan and program-making at the national and international level – have not resulted in the expected transformative change within economic sectors. What are the underlying drivers of biodiversity loss that need to be addressed?

The debate on biodiversity mainstreaming within the context of the Convention on Biological Diversity (CBD) has been evolving since the treaty came into effect three decades ago. In the early days of the Convention, mainstreaming did not play a major role and was only considered in the context of policy integration and coherence within the public sector. With the Strategic Plan for Biodiversity (2011-2020), mainstreaming became a stronger focus: Discussions centered on mainstreaming in productive sectors with a continued emphasis on the role of governments in enabling mainstreaming. Previous international biodiversity negotiations focused specifically on key industries such as agriculture, fisheries, forestry, and mining. These productive sectors are closely linked to the main drivers of biodiversity loss, including changes in land and sea use, direct exploitation, pollution, invasive alien species, and climate change.

Within the ongoing negotiations of the new global biodiversity framework, mainstreaming is understood as a key element of transformative change that does not only aim to trigger change in productive sectors, but also at a macro level, addressing the indirect causes as well. These indirect drivers of biodiversity loss include poor governance, economic systems, equity issues, and societal values. For this reason, transformative change requires a fundamental, system-wide configuration and integration of biodiversity objectives at all levels.

Photo by Quentin Pelletier from Pexels