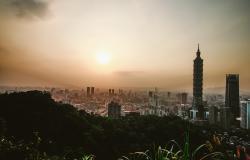 Dan Steinbock argues that relying on think-tanks and corporate proxies, particularly those of Secretary of State Antony Blinken, US Big Defense seems to be driving the White House priorities from Ukraine to Southeast Asia.

After his travel to Cambodia for the US-ASEAN minister’s meeting, Secretary of State Antony Blinken visited Manila and met with President Marcos and Foreign Secretary Enrique Manalo. Presumably, Blinken’s strategic objective was “to strengthen the enduring alliance between the United States and the Philippines."

Blinken has a vital role in the Biden administration’s controversial geopolitics. It has also been central in the Center for National Security (CNAS), the think-tank architect of the White House funded by Pentagon and Big Defense.*

In the past few months, CNAS has left no doubt about what it expects to happen in Asia and how the Biden administration should respond to such scenarios. Such priorities will require great prudence from the Marcos administration.

“The Philippines shall continue to be a friend to all and an enemy to none,” Marcos said in his first state of the nation address. “We will stand firm in our independent foreign policy, with the national interest as our primordial guide.”

In mid-May, the US NBC’s popular Meet the Press aired a segment, which imagined a conflict over Taiwan in 2027. In the war game simulation, the US-Sino tensions burst into an open war over Taiwan (Figure 1). 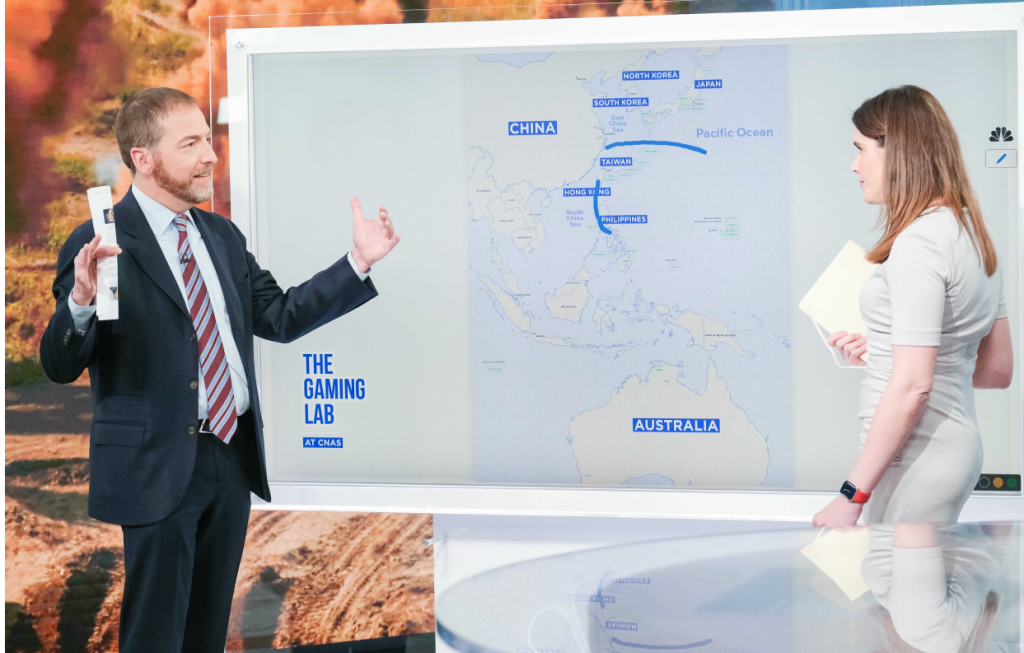 The NBC promo slogans were dramatic: “U.S. should prepare for drawn-out conflict if China invades Taiwan… An attack would plunge the region into a broad, drawn-out war.”

In the CNAS scenarios, Japan, Australia, and the Philippines are defined as “US allies.” (That’s the implication Blinken means by his term “enduring alliance.”) In the Taiwan scenario, Australia and Japan provide base access and contribute forces to the defense of Taiwan, while Philippines permits US forces to use bases on its territory, which turn the country an actor in the imagined war. Nor does CNAS rule out limited use of nuclear weapons in the region.

Here’s the inconvenient truth: Philippines would be the only ASEAN country to suffer the potentially devastating repercussions of the imagined war (Figure 2). 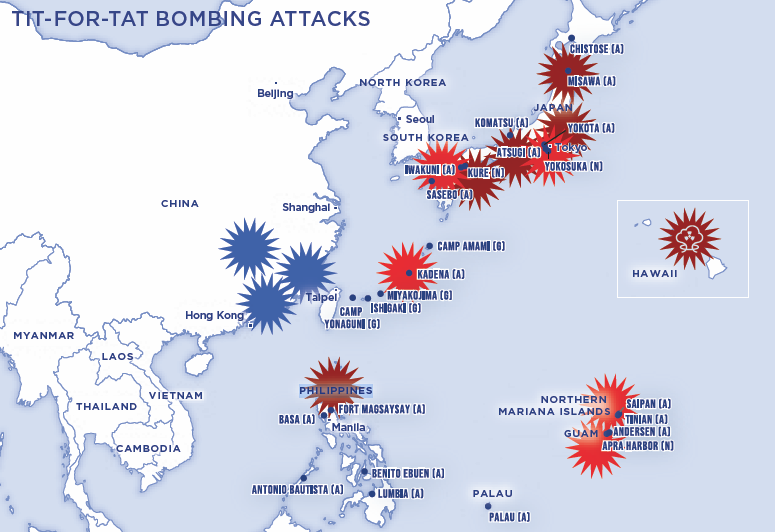 Fighting to the last Asian?

What made China opt for the invasion of Taiwan in 2027, as CNAS suggested? Actually, China didn’t. The selected year did not come from Beijing at all, but from Washington.

The year 2027 was "postulated" in public Washington testimony in March 2021, by the ex-Commander of US Indo-Pacific Command, Admiral Philip Davidson. He is the controversial Cold Warrior who in 2020 had ignored the US Navy’s Covid-19 order, which left 600 sailors testing positive, with one fatality. Yet, the testimony shifted attention from his misconduct to purported patriotism – a classic diversionary tactic.

What is the CNAS solution for the Taiwan tensions? Strategic talks? International diplomacy? Not at all.

Instead, Michèle Flournoy, the co-founder of CNAS and a veteran Hillary Clinton advisor, urged the United States to develop “the capability to credibly threaten to sink all of China’s military vessels, submarines, and merchant ships in the South China Sea within 72 hours.”

Flournoy is notorious for her hawkishness, from Afghanistan and Ukraine to Asia. The effective objective is to militarize containment and minimize US costs by diversifying risks to allies and proxy conflicts to Asia, based on Ukraine lessons.

Whether that would contribute to peace is debatable, but it is certainly in line with the interests of CNAS’s big donors, which include the crème de la crème of the Big Defense: Northrop Grumman, Boeing, Lockheed Martin, and Raytheon. The donors also feature energy giants Chevron and Exxon, Soros’s Open Society Foundations and the US-based Taipei Economic and Cultural Representative Office (TECRO).

After 2016, there has been a significant escalation in Taipei's big donations to US think-tanks, thanks to funding by the TECRO and other Taiwanese lobbyists. Since then, prominent think tanks - Brookings Institution, the Center for American Progress, the Center for a New American Security, the Center for Strategic and International Studies, and the Hudson Institute – have released policy papers urging greater U.S. ties and arm sales with more independent Taiwan, in return for five- and six-figure annual checks. In 2020, Taiwanese lobbyists helped to push through more than $5 billion dollars in arms sales to Taiwan, in part by contacting the offices of nearly 90 percent of all members of Congress, particularly Speaker Pelosi's office. The same goes for U.S. Senate Foreign Relations Committee, which recently introduced the bipartisan Taiwan Policy Act of 2022 to provide almost $4.5 billion in security assistance over the next four years and designating Taiwan as a "Major Non-NATO Ally." Coupled with Pelosi's recent Taipei visit, these moves will accelerate – not decelerate - Chinese efforts at Taiwan's reunification.

How to make fortunes on geopolitics

Undeniably, geopolitics can be lucrative to those consultants whose ideas promote military wares. Between the Obama and Biden administrations, Blinken co-headed WestExec Advisors with Flournoy. Unsurprisingly, allegations have also been raised about his conflicts of interest, as well.

Following 25 years in government jobs, Blinken left for the private sector after Hillary Clinton lost to Trump in the 2016 election. With key clientele in defense industry, private equity, and hedge funds, WestExec has been manna from heaven to him. Today, only half a decade later, Forbes estimates his worth at about $10 million, according to estimates on WestExec contributions, real estate, equity stakes and board memberships (Figure 3). 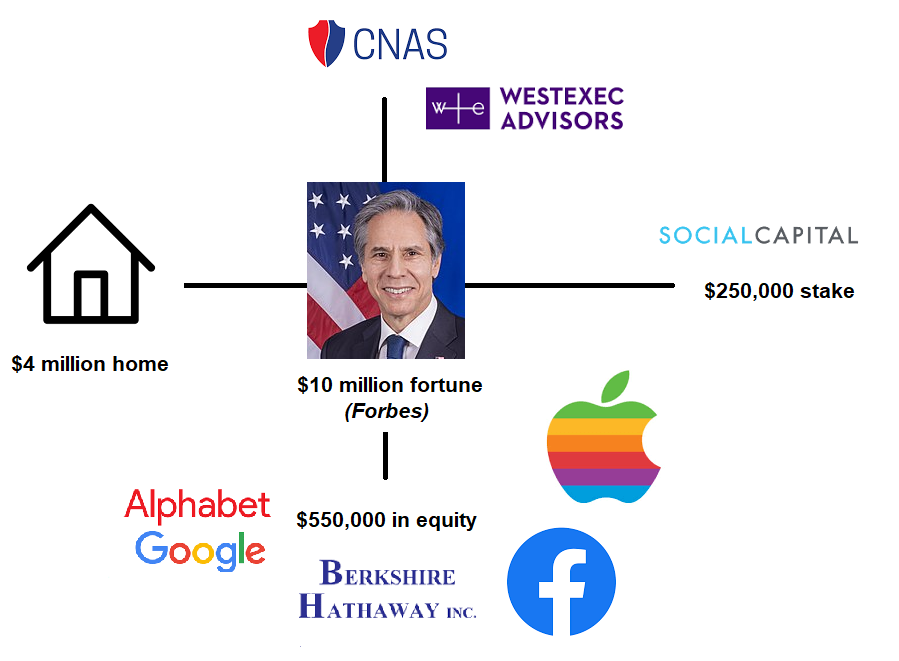 When members of the cabinet have significant investments in Big Tech, such as Alphabet (Google), Facebook and Apple, the bold antitrust policies that the Biden administration initially promised seem unlikely.

The venture capital firm Social Capital was founded by an ex-Facebook Sri Lankan-Canadian-American entrepreneur. In 2017 Marc Mezvinsky, better known as the husband of Chelsea Clinton, became its vice chairman. An ex-Goldman Sachs banker, Mezvinsky had launched a hedge fund to profit from the Greek debt crisis. By 2016, while managing $330 million, Eaglevale Partners closed its Hellenic fund after losing 90% of its value. Social Capital was a welcome stint after the debacle.

Flournoy and Blinken also served as strategic partners in a private equity firm Pine Island Capital Partners, led by the notorious investment banker John Thain who tanked Merrill Lynch in 2008, while paying himself fat bonuses along the way. Amid the subprime debacle, Thain spent $1.2 million to remodel his office, including $35,115 for a gold-plated commode on legs (he apologized and reimbursed the company, after he got caught).

By late 2020, Pine Island Capital was well-positioned to cash in on the US Covid-19 response, investing in government contractors.

In the 2018 Shangri-La Dialogue, Asia’s premier defense summit, General Dynamics CEO Phebe Novakovic asked why weren’t US defense contractors making more money in Asia, the world’s most dynamic growth market? To win over the “unsophisticated buying authorities” (read: the governments of East and Southeast Asia) she advocated upgrades “to fight together should the need arise.”

At the time I warned about intensified efforts at an arms race in the region.

Since then, progress has been rapid. Today, Asia is geopolitically more divided, economically weakened and thus militarily more vulnerable as monies are being diverted from economic development to rearmament. Furthermore, today the risk of nuclear proliferation overshadows the region as well (which is typically shunned in most “war game” scenarios). In other words, new opportunities and new markets are now more viable for Big Defense.

The other side of the story is runaway inflation, growth-slowing rate hikes and rapidly spreading collateral damage from new conflicts to new Cold Wars. When Big Defense needs new enemies, even national interest is no longer national.

In East and Southeast Asia, disagreements have been negotiated for years to preempt conflicts. When destructive conflicts don’t exist, there is now a huge profit motive to create them – even in the peaceful Asia.

Dr. Dan Steinbock is an internationally recognized strategist of the multipolar world and the founder of Difference Group. He has served at the India, China and America Institute (USA), Shanghai Institutes for International Studies (China) and the EU Center (Singapore). For more, see https://www.differencegroup.net

* For the full analysis of CNAS, WestExec, Biden administration and the Big Defense, see Steinbock, D. 2022. “The Center for International Insecurity.” The World Financial Review, July-August.

The commentary was originally published by The Manila Times, Aug. 1, 2022,