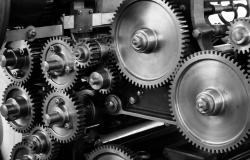 In the next decade or so, the history of economic policy will be enriched by a new, never imagined, experiment: how to accomplish technologically regressive import substitution? This is the problem that Russia will have to face and that is entirely new. To explain why it is new, consider first what is import substitution. It was originally, at the time of Alexander Hamilton and Friedrich List, a policy whose objective was the technological catch-up of less developed countries through the use of high tariff barriers to enable local production of things that were previously imported. The policy was imitated by many other countries, including Imperial Japan after the Meiji Restoration and Czarist Russia under the Prime Minister Sergei Witte. Soviet industrial policies in the 1930s and even after World War II were also in the same mold. And, finally, domestic policies in Brazil and Turkey in the 1960-80s (among other countries) defined the meaning of import substitution for several generations of economists.

In all these cases, not surprisingly, the aim of policies was technological modernization. No one has ever tried to implement import-substitution policies with the objective of going backwards in the development chain. Neither would Russia were she not under the pressure of Western economic sanctions. Why does it have to go backwards? The reason is that Russian “inclusion” in the world economy over the past thirty years has left the country fully dependent on foreign technologies, as Russia has specialized in the production of raw materials, food and relatively unprocessed products. The industrial areas that are normally the backbone of traditional (predigital) development  were well developed in the Soviet Union, but have been abandoned, left to deteriorate and, even if barely existing, are today technologically obsolete. Almost all of what is technologically advanced was produced, or was dependent in part, on Western-made technologies.

In the next decade Russia will try to revive these industries (e.g. machine building for petroleum and gas exploration, avionics, car production) on the basis of technologies that have been left rusting for thirty years. For sure, Russia would prefer to catch up with Boeing and Airbus, but an endeavor of that kind requires years and years of development and tens of thousands of specialists. Instead, as the Russian Ministry of Transport’s just published plan for the period up to 2030 envisages, in order to (re)create domestic aviation industry Russia will have to go back to the Tupolev-like technologies and that of the rather unsuccessful Sukhoi Super Jet. Even if Russian regressive import substitution is successful in terms of output, which is very doubtful as it projects the increase of production from 18 domestic aircrafts in 2022 to almost 200 in 2030 (the rate of growth of 35% annually!), once the Russian market gets reopened and sanctions lifted, all that effort will be shown to have been in vain because the new and created-from-scratch Russian models would be less efficient than Western.  Thus, in the year X when sanctions are removed, Russia will be, under the most optimistic scenario, in the same position that the USSR was in the 1980s: it will have an industrial base but that base will not be internationally competitive.

To further complicate the matters of technologically retrograde import substation, we need to take into account the labor force. In past import substitution episodes, workers were relatively low-skilled and import substitution policies were supported by policies of improved education in order to have workers able to “man” the new and more sophisticated machinery. In the Russian case now, the problem is exactly the reverse. Russia has a labor force that is highly  educated and tends to move towards post-industrial areas, like in other advanced economies. But here it would have to go down in its skills levels to be adequate for the operation or (re)creation of the technologically regressive  import substitution. To put it in graphical terms:  while the original import substitution required that semi-literate peasants learn a bit of arithmetic in order to “service” the machines, here we would expect software engineers to become metal-bashing workers or foremen in large factories. This is because the demand for their (advanced) kind of skills will be reduced as Russian economy is cut off from the global market, and domestically there will be few similarly advanced sectors that would employ them.

There will be thus a mismatch between the skill level of the labor force and the skill level technologically needed. Suppose that workers of high skill level (HW) are needed to work with highly sophisticated machines, say robots (HM).  But if HM are unavailable  because previously they were all imported and they cannot be produced at home, the technological level of home-produced machines will be medium, call it MM. For MM however, one does not need HW workers but medium skilled workers MW. Thus, one needs to proceed to the deskilling of high-skill workers or just simply to ignore their level of education and “allocate” them to the jobs for which they are over-qualified. It is hard to believe that workers would find such repositioning attractive whether in terms of income, or challenge of, or interest in, the work they do.

From the economic point of view this forced experiment will be interesting to observe since, as I mentioned, nothing similar in modern history has ever  happened, but I do not think that it will be very much fun for the participants.