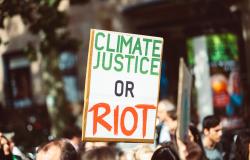 Finance for Loss and Damage came onto the negotiating agenda at COP27 in Egypt – climate researcher Lily Salloum Lindegaard argues that this has only made the delay tactics by wealthier countries more visible.

Loss and damage as a policy area is marred by deep-seated divergences between more vulnerable and developing countries and wealthier, developed countries. Already in 1991, in the negotiations to form an international climate convention, small island states flagged the need for finance to address the coming climate impacts. However, no such measure was included in the United Nations Framework Convention on Climate Change (UNFCCC, 1992).

Now, three decades later, more vulnerable and developing countries continue to push for finance arrangements to address losses and damages. This issue has become a major focal point at COP27. But rather than offering substantive progress, COP27 has so far mainly demonstrated the delay tactics employed by wealthier nations.

The Path to COP27

This momentum on loss and damage in the policy field has reflected growing losses and damages on the ground. The latest IPCC report finds that losses and damages are already widespread and severe – from rising food scarcity, malnutrition and mortality to species extinctions and losses of entire ecosystems already observed at 1.1 degrees of warming.

Negative climate impacts are occurring at lower levels of warming than previously expected, and it will not be possible to adapt to all current and coming climate change impacts – especially in the most vulnerable countries that are most affected by climate change. This translates to extensive losses and damages.

Such losses and damages are already being felt around the world. Therefore, at COP26, the G77 + China pushed for the establishment of the ‘Glasgow Facility’, a funding facility dedicated to loss and damage. There was not broad consensus, and it was instead agreed that the ‘Glasgow Dialogue’ would be established to discuss finance over the following two years.

The push for dedicated finance to loss and damage emerges against the backdrop of extremely limited finance under the UNFCCC to loss and damage specifically, with what is available being difficult to access. That means that countries needing support for rebuilding after an extreme event; support to climate-related migration, resettlement or displacement; or compensation for lost territory or GDP have few to no options.

These diverse and unmet loss and damage needs are being clearly articulated by affected countries and are supported by the latest IPCC assessment report. However, the response from the Global North is largely characterized by delay and pushback – countries from the Global North, concerned with questions of liability and compensation, have been beating around the bush.

At the first session of the Glasgow Dialogue in June 2022, for instance, countries from the Global North emphasized the importance of minimizing loss and damage, attempting to steer focus back towards adaptation and away from finance to address losses and damages after the fact. They also highlighted the utility of existing mechanisms both inside and outside the UNFCCC, such as humanitarian assistance, disaster risk reduction, development assistance, the Adaptation Fund and the Green Climate Fund, risk pooling and insurance mechanisms, etc.

Needless to say, there has been pushback. Vulnerable countries highlight that existing mechanisms have largely failed to fill the major gaps in loss and damage finance. Humanitarian assistance, for instance, is already extremely overstretched. And the novel measures increasingly put forward by countries of the Global North, specifically insurance, have a quite limited utility considering the diversity of loss and damage needs.

In addition, non-UNCCC mechanisms are not based on the convention’s principles, for instance historic responsibility, equity and common but differentiated responsibility. They can entail different mandates and interests, not solely focused on loss and damage needs of vulnerable countries.

Now in Egypt, finance for Loss and Damage made it onto the negotiating agenda for the first time. While it has been widely reported that the COP would therefore address the issue of compensation, this is not the case.

In a verbal read-out by the COP’s president, it was noted that “The outcomes of this agenda item are based on cooperation and facilitation and do not involve liability or compensation.” At the same time, a footnote was included in the official agenda noting that “This item and the outcomes thereof are without prejudice to the consideration of similar issues in the future”, giving parties the room to take up liability and compensation at a later point.

This wrangling set the tone for the work with finance at the COP so far. Developed countries continue to delay, dilute and delimit steps towards dedicated loss and damage finance under the UNFCCC:

Delay: On the whole, countries from the Global North have sought solutions that delay a decision on finance. The Glasgow Dialogue is one examples. Now at COP27, an elements paper based on the negotiations on loss and damage finance reflected the same. Under the point ‘Outcome of the ‘process’ up until 2024’, two options were included. The first, funding arrangements. The second, “Decision(s), on the basis of the negotiations, informed by technical work to be conducted, taken between 2023 and 2024, on the role of the Convention and the Paris Agreement in the context of the mosaic of funding arrangements for responding to loss and damage.” In other words, deferred decisions.

Dilute: Countries from the Global North continue to try to dilute discussions of loss and damage, for instance by including ‘minimizing’ loss and damage in the discussion, which effectively introduces preventative action, i.e. adaptation, into the equation. This is also evident in some of the financial pledges for Loss and Damage that have been announced during the COP.

These tactics are nothing new – they have dogged loss and damage finance for years. And now that it is an official agenda item, they have only become more visible.

It remains to be seen what the COP’s final negotiations will bring. There has clearly been some movement past the gridlock on loss and damage finance. It has indeed come onto the agenda; a few relatively small pledges have been made; the insurance-based Global Shield against climate-related disasters has been launched by the G7 and V20; and, finally, there is increased willingness from some countries from the Global North to consider a finance facility, though with major conditions. These mark progress in an area that has seen little for decades. Yet the outcome of the COP in terms of filling current major loss and damage funding gaps is still uncertain.

What is clear is that pressure regarding loss and damage finance will not ease up. The sudden devastation and slow ruin experienced by societies, ecosystems and economies across the globe will continue to worsen with each increment of global temperature rise. The science of loss and damage and attribution to climate change, which has already come far, will continue to improve. And demands from affected countries and populations will only increase.

Time is running out – for the vulnerable countries and populations around the world as they seek to shore up their development and their futures. And for wealthier countries that continue to drag their feet on loss and damage finance.