Why is Climate Change Still Not Top of the News Agenda? 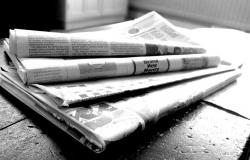 Climate breakdown threatens the lives of us all. Scientific research has suggested that we are in the process of a “mass extinction” event that could lead to “biological annihilation” on a large scale. Records indicate that population decay and the rapid extinction of a large number of vertebrates in recent years amount to “a massive anthropogenic erosion of biodiversity and of the ecosystem services essential to civilisation”.

Studies find that 97% of published climate scientists agree that climate change is driven by human activity. If the scientific predictions are correct, much of human society is in grave danger though our own actions. So, why isn’t climate change the biggest news story in the world?

The parable of the boiling frog tells us that if a frog is placed in boiling water it will leap to safety. However, if the frog is placed in tepid water which is heated slowly, it will not sense the danger until it is too late.

When it comes to climate breakdown journalists play the role of the frog. If we take a literal understanding of the word news as the plural of new – that is, news = things that are new – then the ongoing gradual (in newsroom terms) breakdown of the climate does not meet the criteria. The effects of climate disruption, such as increased occurrences of extreme weather events or individual species extinctions have news value, the wider issue does not.

Nevertheless, this issue cannot be explained in these terms alone. The most recent study into news values suggests that “bad news” and “magnitude” are two of the key elements in stories that become news. The extinction of much of the life on earth certainly meets both of these criteria. But when it comes to climate breakdown, these important news values can clash with the values of what the same study describes as the “newspaper agenda” and “the power elite”. This means that power structures within the mass media prevent climate change being covered as a topic of great importance.

Power structures within the mass media

One of the most common claims about the role of journalists is that they “speak truth to power” or give “a voice to the voiceless”. But most academic research into the role of the mass media in wider society runs counter to these romantic notions of journalism’s role as a “fourth estate”.

Indeed, the commercial nature of most mass media organisations means that they are reliant on advertising revenue to survive. An article about how human consumption is driving increasing levels of atmospheric carbon dioxide looks editorially problematic alongside an advert for a 3D pancake printer. Likewise, an article explaining the connection between global meat consumption and climate breakdown sits awkwardly alongside adverts for discounted beef burgers for the summer BBQ.

Media research has also demonstrated that a significant amount of news can be traced to the public relations activity of powerful corporate and state actors. This can be partially explained by cuts to newsroom staff alongside the growth of the public relations industry. In their new roles as public relations advisors, many experienced former journalists with a detailed understanding of newsroom culture and news values are able to supply journalists with useful quotations, sound bites and even partly-written stories. In some cases, the news media’s overreliance on powerful sources has given undue prominence to organisations with a vested interest in playing down news about climate change. 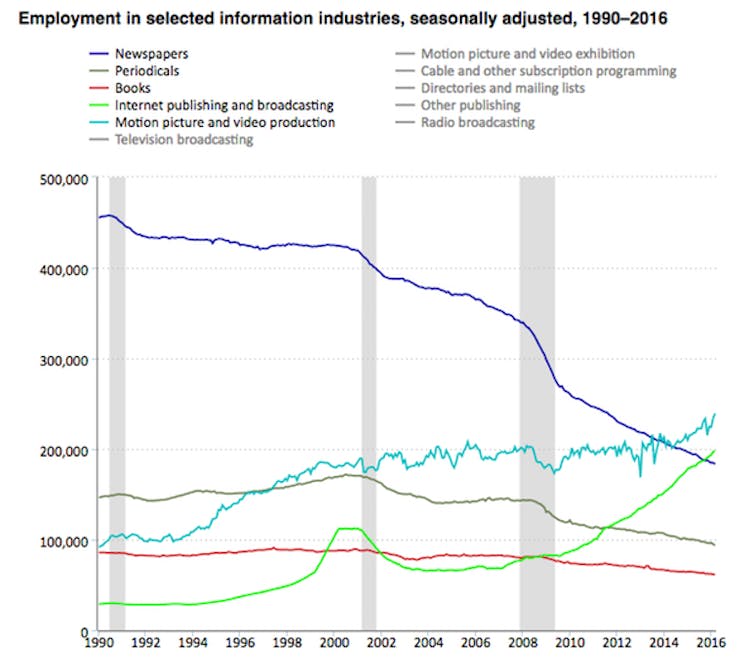 Newspaper reporter jobs are disappearing, often replaced by jobs in PR. US Bureau of Labor Statistics

In an important piece of research about objectivity in the news, the media sociologist Gaye Tuchman looked at how journalists defend their craft by appealing to notions of “objectivity”. Tuchman described how one of the problems with journalistic objectivity is that, to avoid allegations of bias, journalists present a range of “conflicting possibilities”. This often means that journalists give space to both sides of a particular debate without making a judgement on their relative merits. To do so would make them subject to allegations of bias.

In their book, Merchants of Doubt, Eric Conway and Naomi Oreskes, two historians of science, investigated why human-made climate change was presented in the news media as an unsettled debate when the scientific literature supporting it was overwhelming.

They found that a group of scientific experts challenged the consensus on climate change on behalf of corporations and conservative think tanks. Some of the individuals involved in this had previously challenged scientific consensus on a range of issues including the negative health implications of tobacco smoke. Corporations engage in this creation of doubt through public relations activity because climate change requires international cooperation on environmental legislation.

By performing what Tuchman calls a “strategic ritual” of objectivity, journalists obscure the scientific consensus on climate change by reporting it as a debate. This framing makes climate breakdown seem less urgent and therefore less newsworthy.

How can we improve? The notion of objectivity needs to be reclaimed through good journalism which invests resources in providing analysis and verification. News organisations are in an important position to explain complex scientific concepts in a language that most people understand, but they need to improve their scientific literacy in order to verify the relative merit of competing claims.

Journalists with a better grasp of the science (and indeed social science) of climate change would be less reliant on press releases, reducing the impact of corporate lobbyists and the need to include their public relations activity as part of the news. However, these suggestions are optimistic considering the wider power structures that constrain how journalists operate.

This article is part of The Covering Climate Now series. This is a concerted effort among news organisations to put the climate crisis at the forefront of our coverage. This article is published under a Creative Commons license and can be reproduced for free – just hit the “Republish this article” button on the page to copy the full HTML coding. The Conversation also runs Imagine, a newsletter in which academics explore how the world can rise to the challenge of climate change. Sign up here.