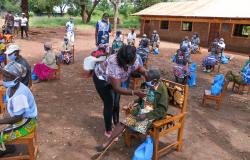 Mosoka Fallah, Jonas Ecke and Sharon Abramowitz argue that improving African health care is in the self-interest of the entire world.

When the Ebola virus was ravaging West African countries in 2014, health care providers, public health researchers and activists worked feverishly to stamp it out before it spread and turned into the type of life-shattering pandemic we’re all too familiar with today.

But the global response to COVID-19 in Africa has been too little, too late. When The New York Times reported in January 2021 that the dead were not being counted in Africa, it failed to mention the living had been abandoned. Africans are paying the price of global abandonment with their lives. The world must improve its response, or future variants of COVID-19 and new viruses and pathogens will surely soon emerge. And we’ve all seen the impact an unchecked virus can have on the world.

Since the outbreak of COVID-19, Africans have once again mobilized their societies and communities to avert a health care calamity. Religious and so-called “traditional” leaders , secular grassroots associations, radio stations, and universities have joined the fight against the virus. Across Africa, people know about the veracity of COVID-19 and the effectiveness a vaccine provides in fighting its deadliness. They have been persuaded by local efforts to fight epidemics, which, post-Ebola, have been built into West Africa’s health sectors, communities, and surveillance capabilities.

Yet in global politics, African engagement to stop disease spread is neither recognized nor supported. COVID-19 has revealed the continued global failure to help build a long-promised meaningful, swift-acting, effective, and fair international public health infrastructure to save lives across the African continent.

Having been part of the initial efforts to stamp out Ebola, we demand that the international community support African health care systems in reversing the spread of COVID-19 on the continent.  These efforts must include dropping the patents of COVID-19 vaccines so that African countries can manufacture the vaccines without fear of legal repercussions.

Global public opinion has accepted the view that mRNA vaccines are too complex and too sophisticated to produce in Asia, Latin America, and Africa. This is a ruse. The truth is that corporate patents on mRNA vaccines are one of the greatest barriers to rolling out generic vaccines across Africa. There are 120 manufacturing sites that have the capacity to produce mRNA vaccines on all three continents.

Recently two Texas-based scientists, Maria Elena Bottazzi and Peter Hotez, have developed Corbevax, a patent-free vaccine that has been approved by the Indian government and will be produced by the Hyderabad-based company Biological E. This new patent-free vaccine has been, quite appropriately, called “a gift for the world”  – and it is especially needed in Africa, where only about 11% of the continent’s population is fully vaccinated.

Nobody should die for the right of the patent. “Patent protections and other IP restrictions are only the latest means of enforcing and worsening inequalities that date to the slave trade and the colonial period,” said Jesse B. Bump, executive director of the Takemi Program in International Health at the Harvard T.H. Chan School of Public Health. To this day, rich countries leverage their economic power to extract African rare earth elements, cocoa, diamonds, and other resources under most inhumane circumstances. Patents for COVID-19 vaccinations are another expression of the desire of Western companies and the countries that support them to extract yet more from Africa and make the most money possible.

In addition to Big Pharma dropping the patents, Covax, the UN’s facility to finance the distribution of vaccines, must be adequately funded. There is no false choice between these two positions. Essential goods like masks, PPE, therapeutics, and vaccine commodities such as syringes are facing shortages in Africa but not elsewhere.

We call upon the G20 countries to donate $10 billion to COVAX and to the support of the COVID-19 response in Africa. For too long, Africa has had to witness the world tolerate its suffering and cope with austere responses to emergency conditions. The African health care infrastructure is marked by severe austerity—epitomized by the barebones Ebola treatment units set up during the 2014 Ebola crisis–where patients received a minimum of treatment, and the imperative of disease control trumped the obligation of care. This bias, too, has deep roots in colonialism, when containing diseases was indispensable for Europeans to conquer and maintain territory.  Global health, as it is currently funded, cannot compensate for the immense needs of “clinical deserts” on the African continent. To illustrate the dearth of funding: the WHO’s entire budget is comparable to a large US hospital’s.

Having observed the devastations of disease spread and the valiant efforts of locals to respond to them, we demand that the international community invest in African health care systems in reversing the spread of COVID-19 on the continent. Such an investment would not be just an act of morality and fairness. As this pandemic and Ebola have vividly shown, improving African health care is in the self-interest of the entire world. Africans have mobilized all their resources to beat back the spread of the coronavirus—it’s time the rest of the world does its part.

Mosoka Fallah, PhD, MA, MPH, is “Technical Assistance Country Engagement Team Lead" of the African Center for Disease Control, where he coordinates the distribution of Covid-vaccines on the African continent. He became Times Person of the Year 2014 for his role in bringing the Ebola epidemic in Liberia to an end. He is a part-time member of the faculty at the Harvard Medical School's Department of Social Medicine.

Jonas Ecke, PhD, is a consultant for international aid organizations, currently associated with Refugee Place International. He studied at Bremen University in Germany, Aalborg University in Denmark and received his PhD in Anthropology at Purdue University in the United States. His research focuses on the post-return integration of refugee returnees in West Africa.

Sharon Abramowitz, PhD is trained as an anthropologist, sociologist, and epidemiologist with credentials from Harvard University, Johns Hopkins Bloomberg School of Public Health, Brandeis University, and Rutgers - The State University of New Jersey. She is currently a Senior Researcher, Department of Anthropology, University College London, an Adjunct Associate Professor at the Center for Global Health Science and Security at Georgetown University, and Honorary Faculty at the School of Public Health, University of Hong Kong. She is also the Director of Communitology.

This first appeared on Global Health Now and was reposted with permission.

Photo by Denis Ngai from Pexels